We received Project Passport World History Study: The Middle Ages from Home School in the Woods to review. Home School in the Woods creates hands-on learning materials for children that can be used by homeschoolers, co-ops or schools (though the co-op and school pricing is different). The recommended grades for this product is 3rd through 8th and can be used by a family with children of various ages.

We used this history study with both kids, although only Bean used the writing portion. As with most history lessons, we aimed for more of an introduction to the time period, and focused on the people, where they ruled, and what happened to them. Bean is a visual learner, so we use pictures, diagrams, maps and acted out events using her medieval toys to help her remember. We also used the timeline, which is the first one we have ever created, and she did amazingly well remembering dates! Munchkin sat out for most of the reading and writing parts of the lessons, but participated in the hands-on parts, like assisting cooking and helping to read the maps.

The Middle Ages starts around 200 AD and ends around 1500 AD. The age starts with what is commonly known as the Dark Ages, and then transitions into a time of discovery, exploration and invention. Project Passport covers so many topics during this study and it includes: invasions and wars, medieval life, class structure, science, education, church history, the Crusades, and different groups of people, such as Norse, Romans, Huns, Anglo-Saxon, etc. This history curriculum is loaded with literacy-based activities, hands-on activities and lessons, and even some exploration into science of the Middle Ages.

Having just read books and learned about the Roman Empire, it was perfect timing to start with the fall of the Roman Empire. The kids were already familiar with the time period and from there we established who the leaders were, where they came from and what territories they controlled. I actually printed out figures for the leaders and their armies and used our huge map of Europe to explain what happened.

But so far their favorite part has been learning about the different barbarian tribes and Britain during the ancient times. They were already familiar with Norse mythology when we started using Project Passport, so they immediately made the connection between the vikings and the Norsemen. We also looked into the languages each group spoke and what their written language looked like (Pict, Norse runes, etc.). Along with the maps and timeline, we have been using a language chart to mark how the language of an area changed through the ages as large groups of people either invade or move into new areas and how the influence of the language they spoke effected the language that is now known in that region. For example, the original Britons tried to defend their homeland (England), but where being pressed in on all sides. From the North they were attacked by the Irish, Picts and Scots, while from the South they were attacked by the Angles, Jutes, Frisians, and Saxons. Eventually the Anglo-Saxons cornered the Britons into what is now known as Wales and Northern Franch (Brittany). It was a combination of Anglo-Frisian that led to Old English, Middle English, and Modern English.

Cooking the old fashioned recipes was Munchkin's favorite part. He absolutely loved Wassail (it combines apple cider, orange juice, spices and is served warmed) and requests it quite often now, despite how hard it is to find apple cider out of season, so we've had to make our own (I highly suggest going the crock pot route). And to add to the cooking experience, we only used our cast iron pots and pans and wooden spoons for the rest of the recipes. The kids tried out Gruel (AKA oatmeal) and had the same feelings as I have, which was to push the bowl away. Pottage was approved, because they both love stews and soups. Herb bread was by far the most popular, and Bean has declared that we can only make our own bread from now on.

Other World History Studies from Home School in the Woods: Ancient Egypt and Renaissance & Reformation.

There are 25 "Stops" included in this historical journey. They can be completed over an 8-12 week period. We prefer to work at our children's pace, so some weeks we only make it through one or two of the Stops. Along the way you will examine different events, meet people (lots of familiar names, and plenty of names I had never heard before - which was a bonus for me, since I love history), and explore the time period by using puppet figures, reading maps, cooking old fashioned recipes and reading the literature of those ages (we did this as a side project to explore authors from the middle ages - mainly poems and ballets, but also folk tales and stories).

So far we are keeping everything in a scrapbook box, with each stop in a separate, labeled manila folder. We only laminated a handful of the papers, such as the blank maps, which they can use a dry erase marker on to draw territory lines. I cut out labeled pieces of paper that were also laminated and have a velcro dot on the back of, so they can place them on the map after they are done drawing the lines. Bean's favorite part about labeling the maps are comparing them to modern day maps. She finds it unique that so many countries around the edge of Europe are large countries, while all the countries in the middle are all fairly small. 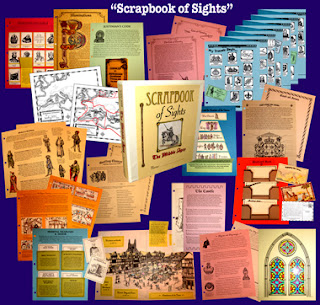 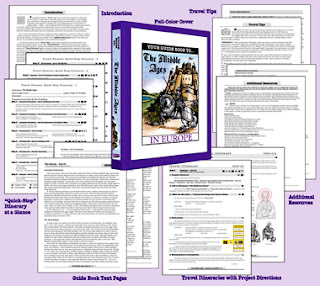 The Project Passport World History Studies are available to download - PC or Mac ($33.95) or on CD ($34.95) and is for individual family use. We received the download version and printed out lessons on a weekly basis. So for example, the first week we printed the cover, introduction, reading list, timeline and first lesson, along with a handful of other printables we wanted in advance, like the map, puppets and cookbook, among others. However, we have a black and white printer, so I'd suggest you use a color printer to fully utilize all of the printables. Because while most are black and white, a handful are not, such as the maps which have red territory lines. We will either use a red marker or a highlighter to draw over those lines.

Overall, we loved using Home School in the Woods' Middle Ages study. It was our first exploration into this time period, and the kids loved learning about European history. Now Munchkin is obsessed with knights, princesses, and Robin Hood, and Bean wants to be a viking warrior (I blame Thor comics) - mainly for the sword fighting, archery and armor. Another highlight was the learning games that were included. It took a couple plays for the kids to fully understand the games, but now they love them.

Additional materials we used to go with these lessons: Safari Ltd. Knights and Dragons TOOB and Days of Old TOOB for sensory bins and small world play, Dover coloring books for Middle Ages, Medieval Life, Costumes, and Knights, The Secret of Kells and Merlin on Netflix, and The Sword in the Stone movie. They also have several books on mythology that we read, as well as books from the library on vikings, celts, Norsemen, and history and life in the Middle Ages. Had the kids been a little bit older, we would have also introduced them to a handful of historical board games that are themed around the middle ages, such as Catan: Cities and Knights, Citadels, Kingsburg, Timeline, and Shadows over Camelot. Even Love Letter can be used to learn about the class structure within the castle of a princess.

I would highly suggest using Project Passport for history studies. It was an incredible curriculum to use (and are still using), and we really look forward to using some of their other curriculums in the future, such as Renaissance & Reformation, as a continuation of our current studies. And someday in the future, we'd love to revisit Ancient Egypt and use their materials for that time period as well. I really hope by then they have a few more choices for Project Passport, because that would be awesome and will just add to the learning experience! Hopefully there will be an industrial age to modern day passport and one that visits Asia during ancient times. We haven't used the Time Travelers series yet, which focuses on American history, but we plan to use them.

For more reviews from the TOS Crew on Homeschool in the Woods' products, click the banner below.

Posted by Unknown at 4:17 PM No comments: Links to this post