The Cat of Bubastes Review 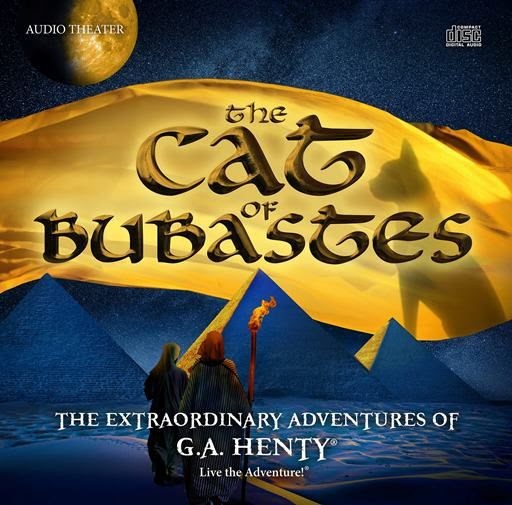 I received The Cat of Bubastes from Heirloom Audio Productions to review. The Cat of Bubastes is a Christian tale from Ancient Egypt for children 6-16. Younger children can still enjoy it with their parents and siblings. The story is over two hours long and comes on two discs. It also comes with a study guide.

Families with younger children may want to break the audio adventure into story-time blocks. We opted to listen to 20 minutes a day during our usual reading time. After each part of the story, I asked my children comprehensive questions to see what they retained and asked them about the characters and story. The Cat of Bubastes is based on a story by G.A. (George Alfred) Henty. G.A. Henty was a popular English novelist and was best known for his historical adventure stories during the late 19th century. Heirloom Audio Productions turned some of his stories into exciting dramas teaching moral values like bravery, determination and duty. 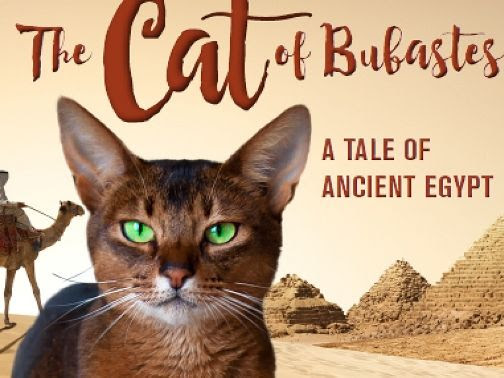 The Cat of Bubastes is about a 15 year old boy who is the prince of a small nation invaded by Egyptians. Chebron is the son of the Egyptian High Priest Ameres and Amuba who a slave in Ameres' household. Chebron accidentally kills a cat which is a crime punishable by death. He flees with Amuba and they embark on an adventure that teaches strong moral character traits.

The story is full of interesting historical information on Egyptian architecture, family life, methods of warfare, government, geography, and religion. My daughter loved that she learned new vocabulary words that we were able to look up after each listening session. She even requested that we pick up the book on our next library trip (they tend to prefer physical copies over ebooks). I have heard that the book has a slow beginning, but is easy to read, even though it has some challenging vocabulary. The audio adventure on the other hand is very easy to get into. My son is fascinated with Ancient Egypt, so this was the perfect story for him. We were able to discuss how religion changed history, compared Egyptian and Christian religious figures, and symbology. 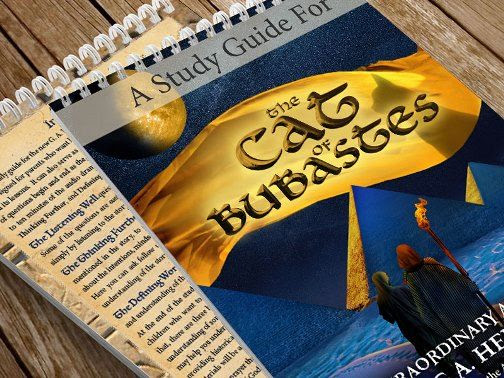 The downloadable study guide is 47 pages long and can be used for homeschooling or Bible lessons. It contains discussion starters to go over the different historical and Biblical moments in the story. We did not use it to write down the answers, because my children do not write independently yet, so we talked about them as a group. TOS Crew members also received an mp3 soundtrack, poster of the crew, a colorful illustrated version of the original story (Ebook), and coloring pages. We did not use the inspirational verse printable or the behind-the-scenes documentary. You're also given access to the Live the Adventure Letter online Newsletter.

Heirloom Audio Productions creates wholesome entertainment for Christians. They specialize in stories of heroics and coming-of-age stories, like The Cat of Bubastes, Beric The Briton, The Dragon & The Raven, In Freedom’s Cause, and Under Drake’s Flag. For families that attend church co-ops or have homeschool Bible lessons, the audio adventures can be used to teach Biblical history. Heirloom Audio wants to immerse the listener in history and engage them in the story.

Posted by Unknown at 11:59 AM No comments: Links to this post 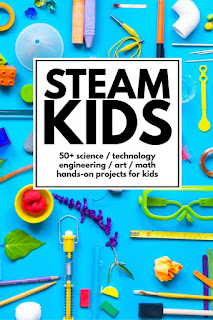 Are you interested in creating fun and educational activities for your kids? Well there's an awesome book for that, and it's a boredom buster to boot! It would have been perfect over the summer, but it's even better now that the school year has begun! Inside you'll find 10 weeks worth of activities, 5 activities per week, and an 11th week full of field trips. The book also provides material lists for each week, field trip ideas, building challenges, and free printables for the activities that require them. An added bonus is the STEAM Journal for kids to keep track of their ideas and notes.


STEAM Kids is a book that will inspire children to: 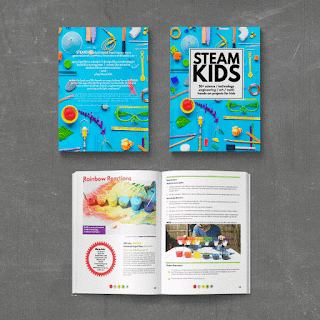 Want to get started on STEAM activities at home? Here are some helpful posts to get you started!
How to Get Started Doing STEAM
How to Teach STEAM
40 Household Items for STEAM Projects at Home
STEM vs. STEAM, Does the A Matter?
52 STEAM Challenges Freebie Opt-in
40+ Projects that Combine STEM with Art
Tips for Acquiring Inexpensive STEAM Materials
Adapting STEM and STEAM Activities for Different Children
5 Surefire Ways to Raise a Kid Who Never Gives Up
3 Genius Tips for Raising out of the Box Thinkers

Most of the activities use materials you already have at home. Whatever you don't have can easily be found at local craft, grocery, and hardware stores. 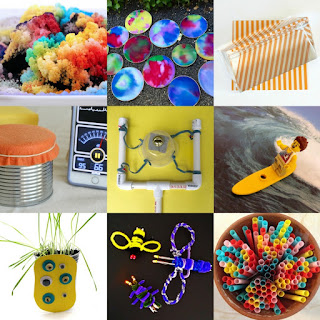 Inside STEAM Kids you'll find activities that focus on five themes: Build, Color, Play, Sense, and Grow. These activities can be done at home or in a classroom. Teachers, parents, child-care givers, and homeschoolers can benefit from introducing STEAM activities to children. Not only are the activities fun, but they are engaging and encourage children to create and explore! 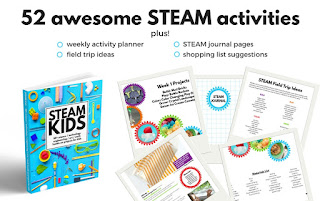 With your purchase, you'll also receive some extras! At the back of the book you will find pages for a STEAM Journal which can be used to Explore Ideas, Sketch Designs, Do Calculations, or Use the Scientific Method: Ask a question, document research, form a hypothesis, design an experiment, record and analyze data, draw a conclusion. The Steam Journal invites you to Invent! Create! Dream! 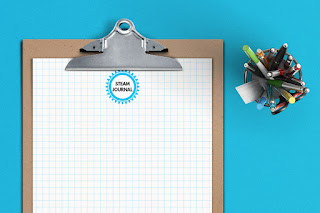 Meet the fabulous creators behind STEAM Kids and visit their blogs! 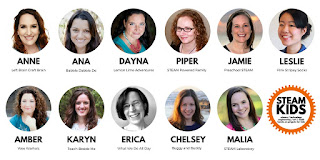 Get it now while there is a special launch price of 50% off! 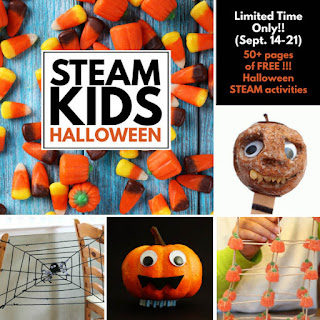 When you purchase the STEAM Kids book during the first week (9/14-9/21), you will also receive a FREE Ebook copy of STEAM Kids Halloween projects for kids which includes over 10 exclusive activities. If you purchase the physical copy, send an email with a screen shot of your receipt to steamkids@leftbraincraftbrain.com.
Posted by Unknown at 11:47 AM No comments: Links to this post 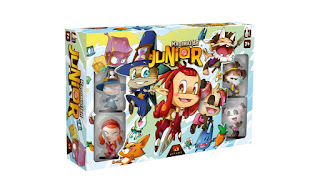 We recently purchased Krosmaster Junior from Miniature Market's Back-to-School sale (and also picked up some Infinity miniatures for us parents). I have been eyeing Krosmaster Junior ever since I saw Krosmaster: Arena being played at PAX East. Krosmaster Junior is a simpler version of the game. I knew my kids would love it. Besides being incredibly cute, it's a great introductory game that has different levels of difficulty. There are seven different adventures, each one more difficult than the last. The game also includes two double-sided maps, lots of tokens, and four characters and their pets. Each character also has their own Adventure Guide, although the adventures are the same in each book. Since there are four of us (not including Baby O who won't be old enough to play this for at least 5 years), this game has the perfect number of characters. They have game names, but we each renamed ours. 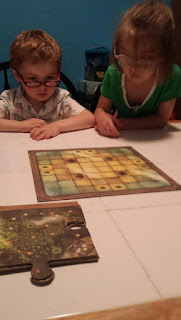 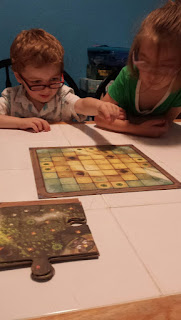 Munchkin and Bean both helped to set up the game. They are able to construct the map, the totems, and the bushes. Meanwhile Daddy and I punched out all the pieces while he explained the rules to the kids. The first adventure does not use any of the tokens, but we wanted to be ready for adventure #2. Something to keep in mind is that you can do any of the adventures as often as you want. And once we are finished with all the adventures, I know the kids will have fun creating adventures of their own. Just like in Robot Turtle, I feel like this game can be more than advertised. We will of course play as intended first though! 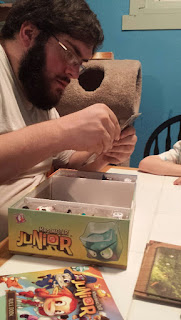 The first adventure only took about 5-10 minutes to play. The first adventure is basically a game of tag and each player is trying to tag another player's pet. My older kids are 5 and 6 and while the game is advertised for 7 and older, I feel like they did extremely well keeping up with the rules. I love that this game will gradually introduce harder rules with each new adventure. 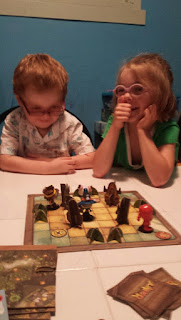 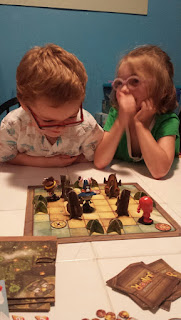 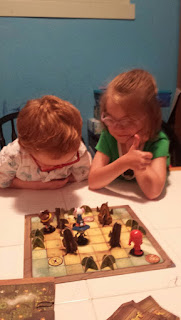 Posted by Unknown at 3:00 PM No comments: Links to this post