The Life Cycle of a Frog The Frog Life Cycle is a great learning activity that every kid loves (or should, because frogs are awesome!). My kids especially love frogs, and it might be hereditary, because I was also obsessed with frogs as a kid. There was a frog pond behind the house I grew up in that was home to hundreds of frogs! It was really fantastic to be able to go outside and watch them grow up. They were your typical freshwater pond frogs and they were so noisy and cute! We had bull frogs, green frogs, northern leopard frogs, and pickerel frogs. There were several small ponds that were all connected to a stream that connected to a bigger river that came from the lake at the top of the mountain I lived on. As far as habitats go, it was a pretty amazing one.

The sad part is that we don't live that close to nature anymore and so to do activities like this, I can't show my kids the real thing. Instead, we use manipulatives from Safari Ltd., read books on the subject and watch YouTube videos (such as this one: The Life Cycle of a Frog).


Amphibians are fantastic creatures that go through an amazing metamorphosis during their life cycle.

1 - Eggs - Some frogs can lay hundreds to thousands of eggs! The eggs are coated in a jelly-like substance that protects them. Not all the eggs survive, some are not fertilized, some dry out in the sun and others are eaten by animals, birds and fish. The eggs that survive will begin to hatch 7-9 days later.

3 - Tadpole without gills - After about four weeks skin will begin growing over their gills which are replaced by lungs and they will also grow teeth! At this point, they begin being very social and swim in schools like fish.

4 - Tadpole with legs (froglet) - By 6-9 weeks they are growing longer and their legs start to grow. By 9 weeks they will look mostly like a frog, but with a very long tail. They can now begin eating fish.

5 - Adult frog - From 9-12 weeks they will lose their long tail and grow a tongue. They now look like small frogs and can leave the water. By 16 weeks these frogs are now adults.

We set up our frog habitat in one of our sensory bins (a large shallow circular platter). You can add water or water beads, but we kept it dry at first while we explored the different life stages. Afterwards I did add a small amount of water so that the tadpoles could swim around and the kids could do some pretend play. I added a rocky area around the small pond so that they had some land to play on and a small plant so the eggs had something to latch onto, as well as a few foam lily pads for the bigger frogs. 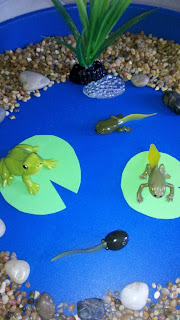 I asked Bean if she could recreate the life cycle and put them in order from eggs to frog. She had seen enough pictures of the frog life cycle that she put them in a circle. 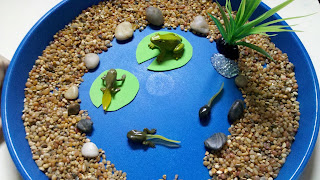 Munchkin watched and occasionally picked up the eggs or the little tadpole. 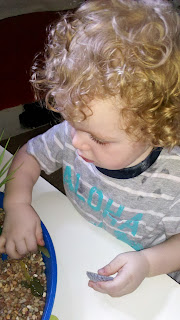 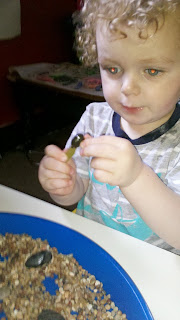 This little guy was very popular with Bean because he had such an expressive face! 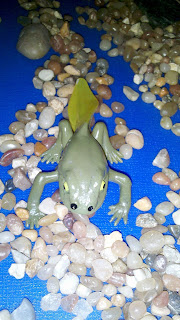 Bean also enjoyed rearranging the habitat. She moved the plant several times and each time made sure to reattach the frog eggs to the rock base because that's where they were safest. She moved a few of the bigger rocks to make a small nest for them as well. 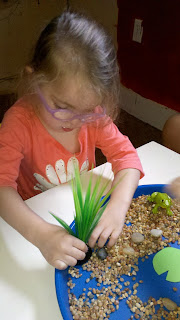 To describe the texture of the eggs, I let the kids play with some water beads. You could also use clear/coloured or regular black tapioca (boba) pearls if you would prefer an edible alternative (which we normally would, but today we wanted to try out water beads). They looked really great in this habitat! Since they were blueish-green in colour they doubled as water. The texture was squishy (and bouncy!), but they weren't as slippery as real eggs. They also lacked a small embryo inside, which Bean noticed right away and told me that they weren't really frog eggs. The she said, "maybe they can be empty eggs?" The tadpoles and mama frog had a lot of fun swimming around in them! 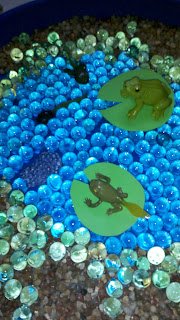 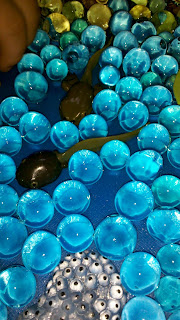 Bean is also curious about Toads, so we discussed how they were different. Frogs lay their eggs in clumps, while toads lay their eggs in lines. We did a simple activity using the water beads to see how that would look. Bean took a handful of water beads and put them on the table. We used a piece of yarn tied into a circle to keep them from rolling away. Beside them she took another handful of water beads and diligently lined them up along the edge of the table. She then jumped up and down exclaiming, "I did it! I lined up Toad eggs!" We then had to scramble around and collect all the water beads that bounced off the table. Hence the lack of a photo. :) 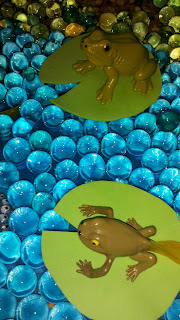 Munchkin was so in awe of these water beads! He did not want to put them away and kept bouncing them around in the frog pond (and on the floor). 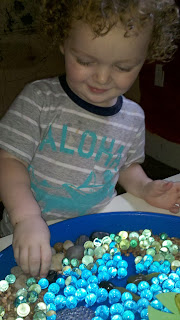 A few of the water beads split open. They actually looked similar to frog eggs after the tadpoles have hatched! 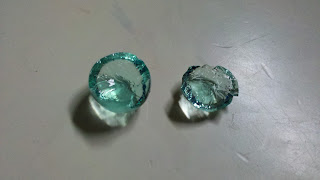 Munchkin used the foam lily pads to pick up the water beads and move them around. This turned out to be a fun fine motor activity for him! 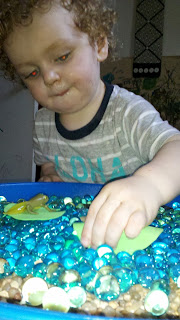 He also enjoyed filling the jar back up! (And that's what a whole packet of water beads looks like! I had no idea it was going to make that much!) 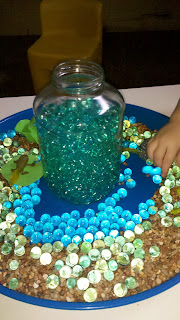 This little guy was completely thrilled to play with these water beads and I suppose we will have to play with them some more until we pick up more tapioca pearls. The main problem I have with water beads is that they are not edible and I worry about someone accidentally trying to eat one... Which did not happen, because I specifically told them that they were not food. However, since our dog was nearby, I made sure she did not try to eat any of them. I tossed her a rock and that kept her busy while the kids played. 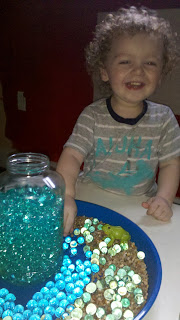 The first maze included just the Mama Frog and her Eggs. Mama Frog had just enjoyed a nice meal and Bean had to hop her all the way home to her Eggs to check on them. Bean managed this easily and told Mama Frog that she was such a good mama! 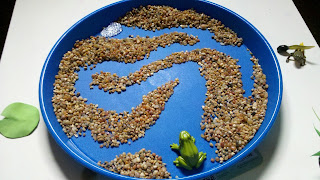 In the second maze, we tried something a little different. We included all of the pieces from the life cycle set and to pass through the maze Bean had to pick up the next piece and move forward from there. So for instance, the eggs drifted and wiggled around until they reached the tadpole and stopped. The tadpole swam forward slowly and met up with the tadpole with gills. That tadpole swam forward a bit faster and reached the froglet. The froglet swam very fast to the frog and then became an adult! Bean hopped the adult frog around and was very proud of herself for successfully completing the Frog Life Cycle. 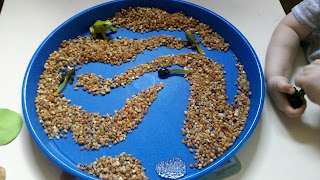 She wanted to do this maze several times and sometimes attempted it backwards! 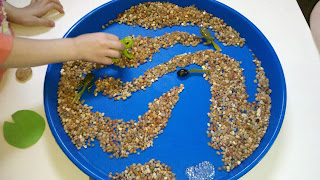 You might also enjoy our edible Frog Eggs post where we used tapioca pearls for the eggs and Jell-O for the pond.

Please always supervise your children when they are playing with sensory materials.