The Life Cycle of a Green Sea Turtle 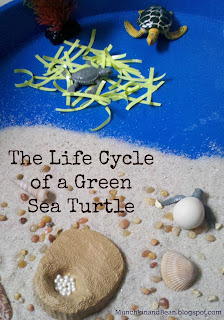 Bean just loves her Safari Ltd. collection and today we added to it! We now have four more Life Cycles

. Next week we will be visiting the New England Aquarium which is home to Myrtle, a green sea turtle who has lived at the aquarium since 1970. The last time we visited the aquarium, Bean was simply in awe of this giant turtle. I cannot wait to bring her back and see if she remembers Myrtle. And since we were talking about Myrtle when we started this activity, Bean decided to name her new mama turtle Myrtle. 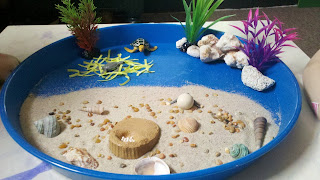 This was our set up, and it was a fairly simple one, but the great thing about it was that everything could be moved around to describe a different scene. We used a round platter, about 1 1/2 cups of sand, some small river rocks (fish tank gravel), a couple different shells, some coral, a couple plants and cut up Easter grass for sea weed. And, of course, our Green Sea Turtle family 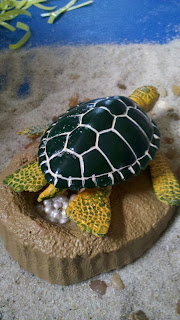 There is always a beginning, and in this case, it begins with eggs. Green sea turtles live their lives in the ocean, but when they are ready, they return to land to lay their eggs on hatching beaches. During the night, the female turtle crawls onto the beach, digs a hole away from the water's edge and lays up to 200 eggs! She uses her back and front flippers to cover the hole afterwards. 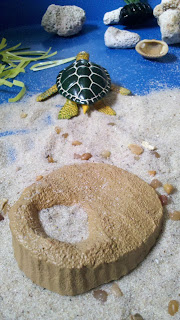 Then she returns to the ocean to her feeding grounds, which are shallow, coastal waters with lush seagrass beds. 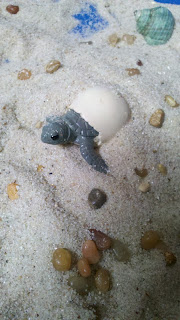 After about three months, the turtles hatch and dig their way out of the sand. Instinct kicks in and they immediately crawl towards the ocean. They have to cross the beach, which can be hazardous to them. They face hungry shorebirds, crabs, small marine mammals and possibly humans who interrupt their journey to the sea. The ones that make it head towards deeper, safer water. (And isn't the hatchling super cute? This was Munchkin's favourite one!) 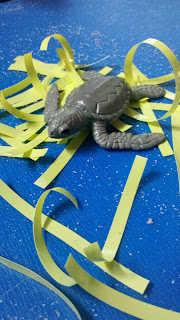 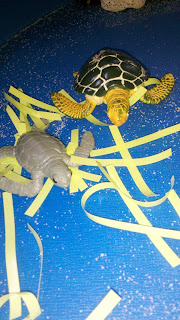 The young sea turtle will spend several years feeding on plankton, jellyfish and fish eggs. Sea turtles are immune to the stinging of man-o-war jellyfish and will quickly learn that they make tasty meals. About 10 years later, the sea turtle grows up to a foot long and is ready to join the adults. At this point in their life, they enjoy eating seagrass in meadows and have become pretty herbivorous. They will migrate with the other adults and eventually make it to the spawning grounds. 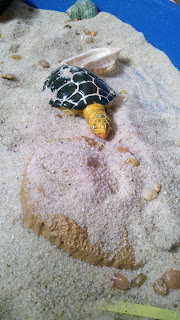 This sea turtle was all grown up and had traveled thousands of miles around the world. She returned to the same beach she hatched at to lay eggs of her own. How amazing is that? Sea turtles are pretty remarkable creatures. 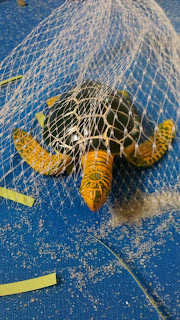 Green Sea Turtles are on the endangered species. Their nesting grounds are in danger of building developments and other creatures that eat the eggs. Pollution in the water harms them, as well as fishing nets, like the one in the picture above. Despite this activities focus on the animals life cycle, I also wanted to teach them about what effects these creatures in the wild. For instance, apart from humans, tiger sharks specifically hunt sea turtles (below) in Hawaiian waters. Bean was also amazed that sea turtles can live as long as humans. However, only about 1% of hatchlings reach maturity. 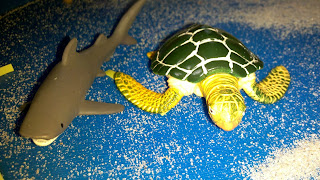 At this point, I had presented the kids with a basket of other marine creatures. 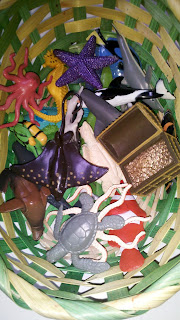 There was another sea turtle so Bean added it to the others and said this was a family looking for food. A diver was added by Munchkin who had him swimming around, but he passed by the turtles and decided to check out the coral reef the kids had put together. 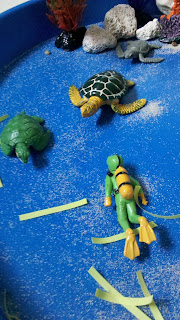 Some activities that we did to add to this life cycle - We lined up the turtles in order (eggs, hatchling, juvenile, adult), compared the features of all the turtles, talked about their habitat and what they eat, and talked about why they are endangered. 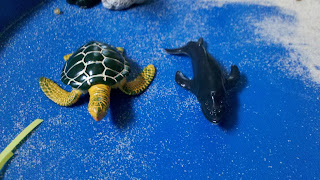 Somehow this sea turtle managed to grow larger than this humpback whale! That's amazing! And wildly inaccurate! :) I showed the kids many pictures of sea turtles online and we even watched a few short videos on YouTube. They were able to see how big a sea turtle was compared to a humpback whale. At birth a sea turtle could have fit in the palm of their hand, but by the time they had lived several decades, they could have been almost a half-a-foot taller than Bean! I had her stand against a wall and I drew a line at 31 inches, her height, and 44 inches. She could then compare her height to the two other lengths (we got the measurements from Wikipedia). One length was shorter and the other longer than her height. Sea turtles can weight between 150-420 lbs. We haven't gone over weights too much yet, so this was a hard concept for them. I picked Munchkin up and said that he was MUCH lighter than a sea turtle and Bean laughed and said, "No, he's heavy!" 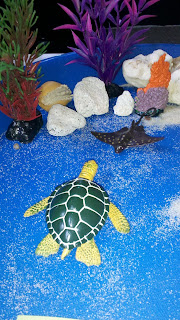 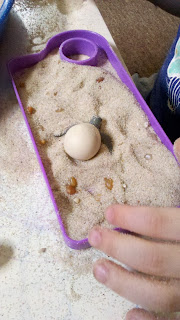 Bean had to make the hatchling a comfortable and safe bed of sand. The irony is that the safe bed is actually an upside-down cutting board. Eek! 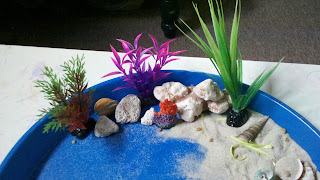 Bean enjoyed playing with the Green Sea Turtles and meeting their friends and enemies, in the case of the tiger shark. Munchkin enjoyed rearranging the coral reef about a dozen times and taking the diver on adventures. :)

Stay tuned for our next life cycle activity!