I recently picked up a packet of small wooden spools at our local craft store because I figured we could use them for some fine motor skill activities and crafts. So far they have been used for practicing threading on pipe cleaners (which is always a favourite fine motor activity). But ever since I brought out the marbles.. It was all over for the pipe cleaners! Marbles are just so much fun to play with! And it turns out that marbles and spools go really well together. 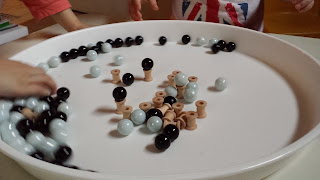 If the expression on his face does not convince you that this was a really fun activity, I don't know what more I can say. Both of my kids thoroughly enjoyed this entire activity and since we began playing with them earlier this week, they have played with them every day since. We actually haven't needed to put them back on the shelf and have left the marbles and spools in a wicker basket on this platter on the table, so they are easily able to access them. 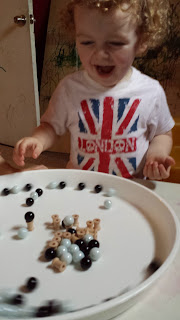 So how can you use them together? Well, you can stack the spools to practice balancing and then put a marble on top to see how much weight can be supported. The highest we managed was 8 spools before it would collapse under the marble! You can practice counting while you stack them, which we did. 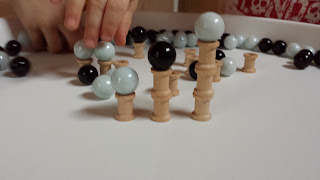 Munchkin lined up the spools and then added the marbles, always one colour. 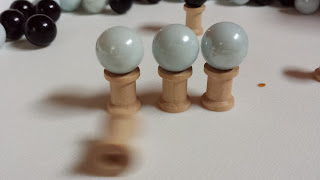 We created a few different shapes, like this triangle, as well as squares, circles, hearts and crescents. 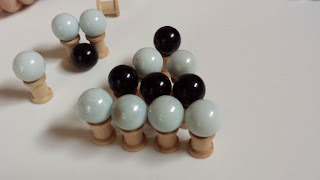 Bean is interested in patterns, so she mixed and matched the marbles to make simple patterns. 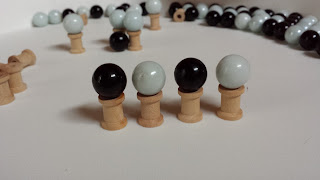 Munchkin is really beginning to enjoy fine motor activities that require concentration. The spools and marbles are small,  and he was so very careful placing each marble on the spools. 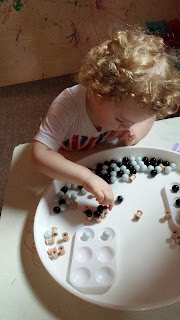 Bean used a few of our paint trays to create patterns using the marbles. 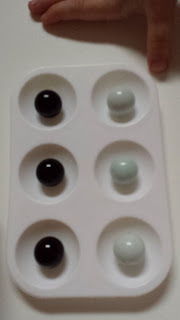 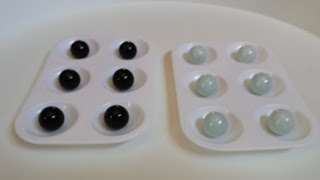 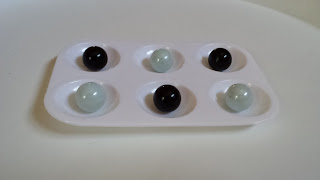 We also used a piece of cardboard that had been hole-punched around the edges. We have a few different shapes, including circles, squares and triangles. The kids sometimes use these to colour on, but typically we use them to practice lacing with yarn. Now they have another new purpose, and that's as a pattern-making fine motor activity. :) 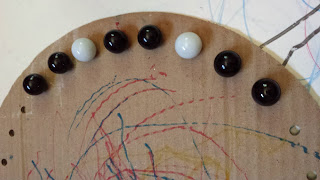 After they had been stacking spools for a while, they realized they could create standing shapes as well! They made a triangle, square, rectangle and trapezoid. 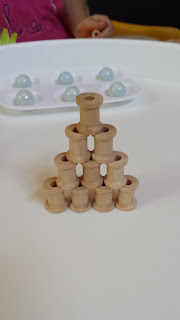 But stacking them up like this was definitely the highlight of the stacking activities! 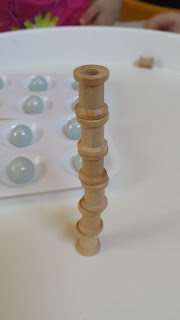 The Leaning Towers of Marbles. 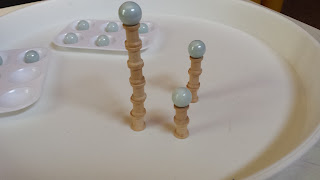 And of course we had to go blowing! The kids have a much bigger set of bowling pins and balls, but they don't use it too often. The bowling pins are more commonly used as bonking weapons. This smaller version was easier to contain and it has been helping Bean learn to flick things. Although that may sound like a weird skill to teach, it has come in handy. Bean could not figure out how to flick a penguin around on one of her learning apps, but now that she has had some practice playing mini-bowling, she is a pro at it! Not to mention, this game is fun for practicing hand-eye coordination. 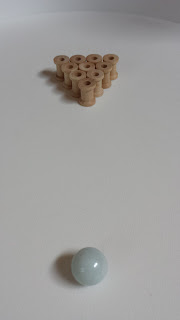 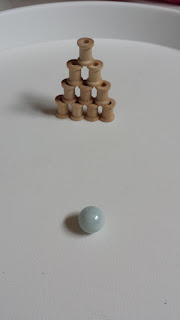 It was a messy hair day for Bean, but that didn't stop her from bowling! She played the game backwards for a while until I showed her how to flick the marbles enough times that she was confident trying it on her own. Despite having to rebuild the spool target every other minute, they played mini-bowling for almost an hour! 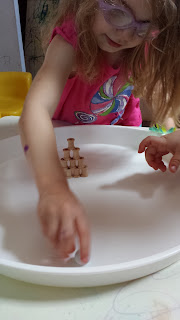 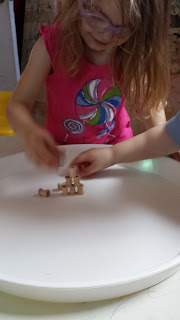 The wooden spools were also used for fine motor threading practice. Munchkin uses pipe cleaners, since they are easier to hold and thread with. Bean has moved on to yarn, thick threads (usually my DMC floss, because I'll probably never have time to cross stitch again) and her favourite, shoelaces. 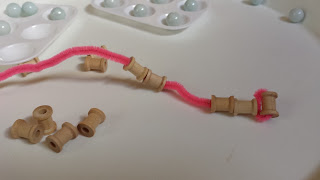 Threading can be very exciting! Munchkin does not like to reuse the same pipe cleaner, so he will request a new one each time he has loaded one up. This means that sometime we have several pipe cleaners lying around that are full of beads or spools that I can't remove until he has forgotten about them. :) 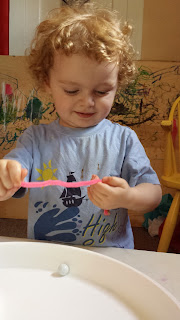 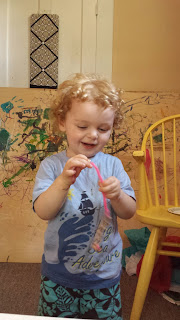