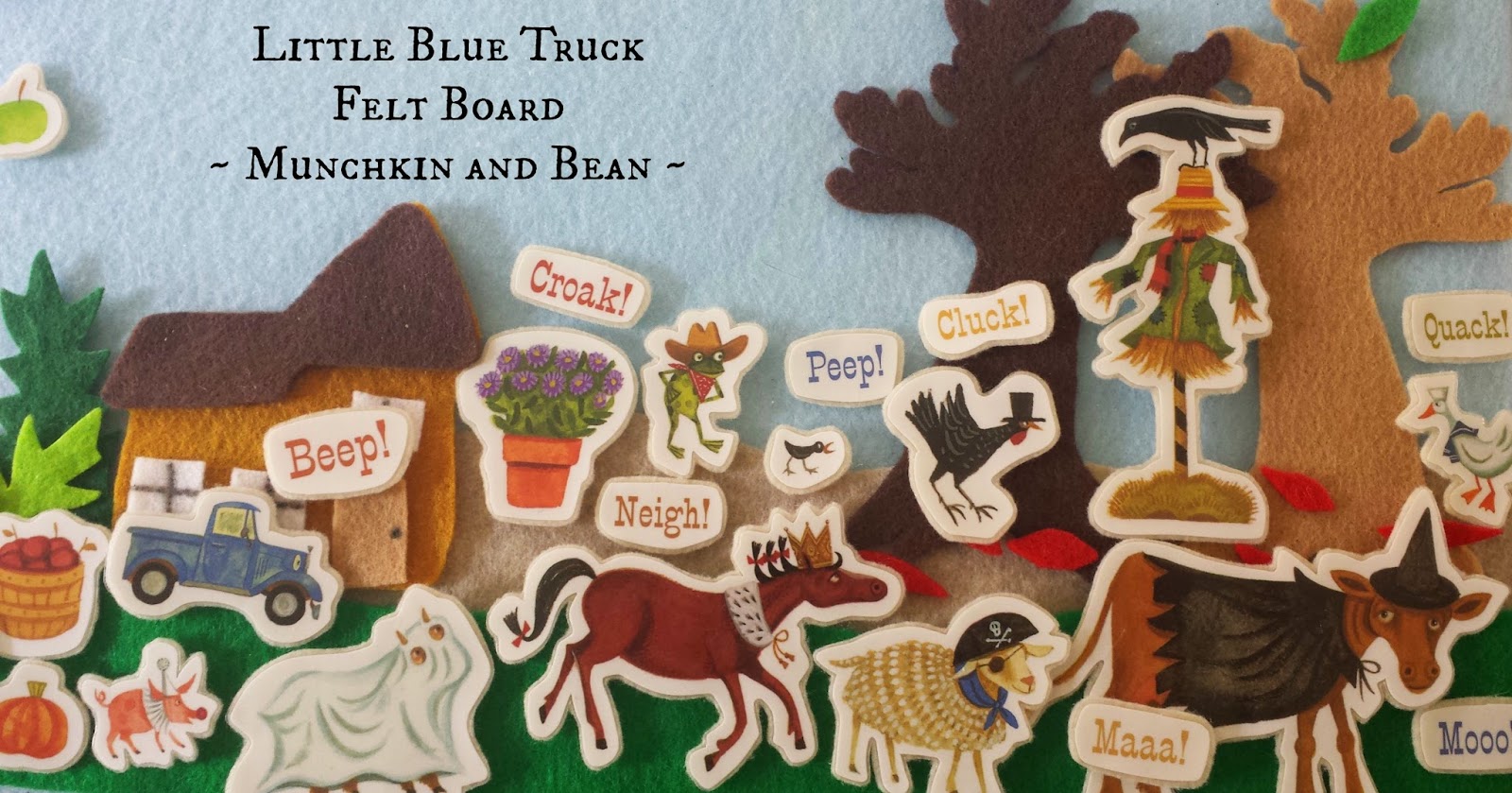 Munchkin is obsessed with the Little Blue Truck

book and its sequel, Little Blue Truck Leads the Way

. Well a few months back we picked up Little Blue Truck Farm Sticker Fun!, because I knew he'd love it. He did use a handful of the stickers in the book and recently he has been completing the activities in the book, like the mazes and coloring sections. But I snagged a few stickers and laminated them, so I could make them into felt board pieces (I used the same process for our Marvel Felt Board Pieces). I am so excited for the release of the Little Blue Truck's Christmas (September 23)

, which I will likely include in our 25 Days of Christmas Books collection.

I laminated the characters, the animal sounds (really sad that they did not include Baaa), and some other stickers, like the scarecrow, some pies, baskets of apples and some fruit and guards. I cut out the pieces and trimmed them so the edges were smooth. Then I used an Elmer's CraftBond Glue Pen

to glue the laminated stickers to a sheet of felt (I used cream colored felt). I spaced them out a bit, so they'd be easy to cut out. I let the glue dry overnight. 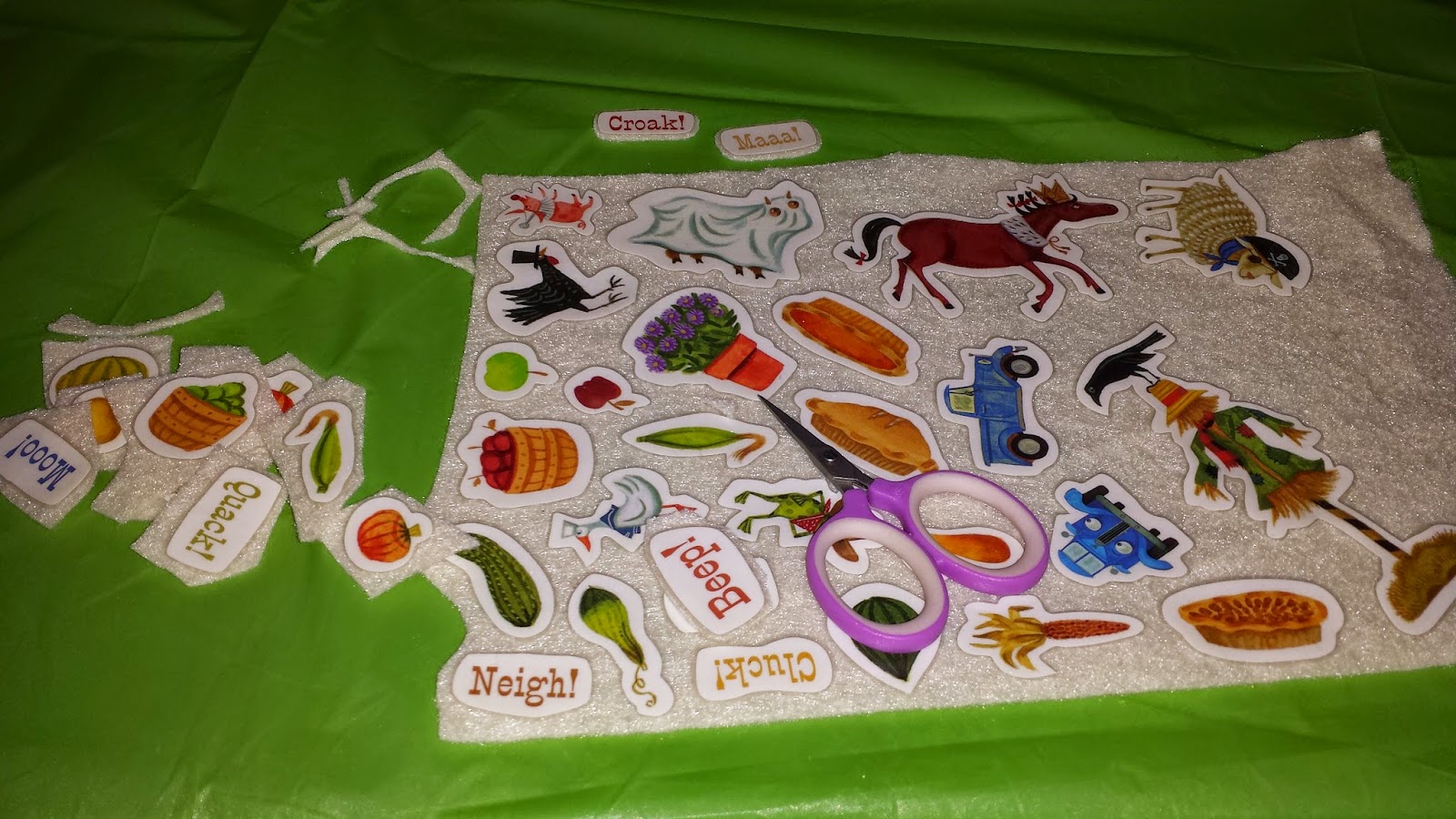 I cut each of the stickers out so that they'd be easier to trim around. I cut around the edge of the laminated sticker, so there isn't excess felt. 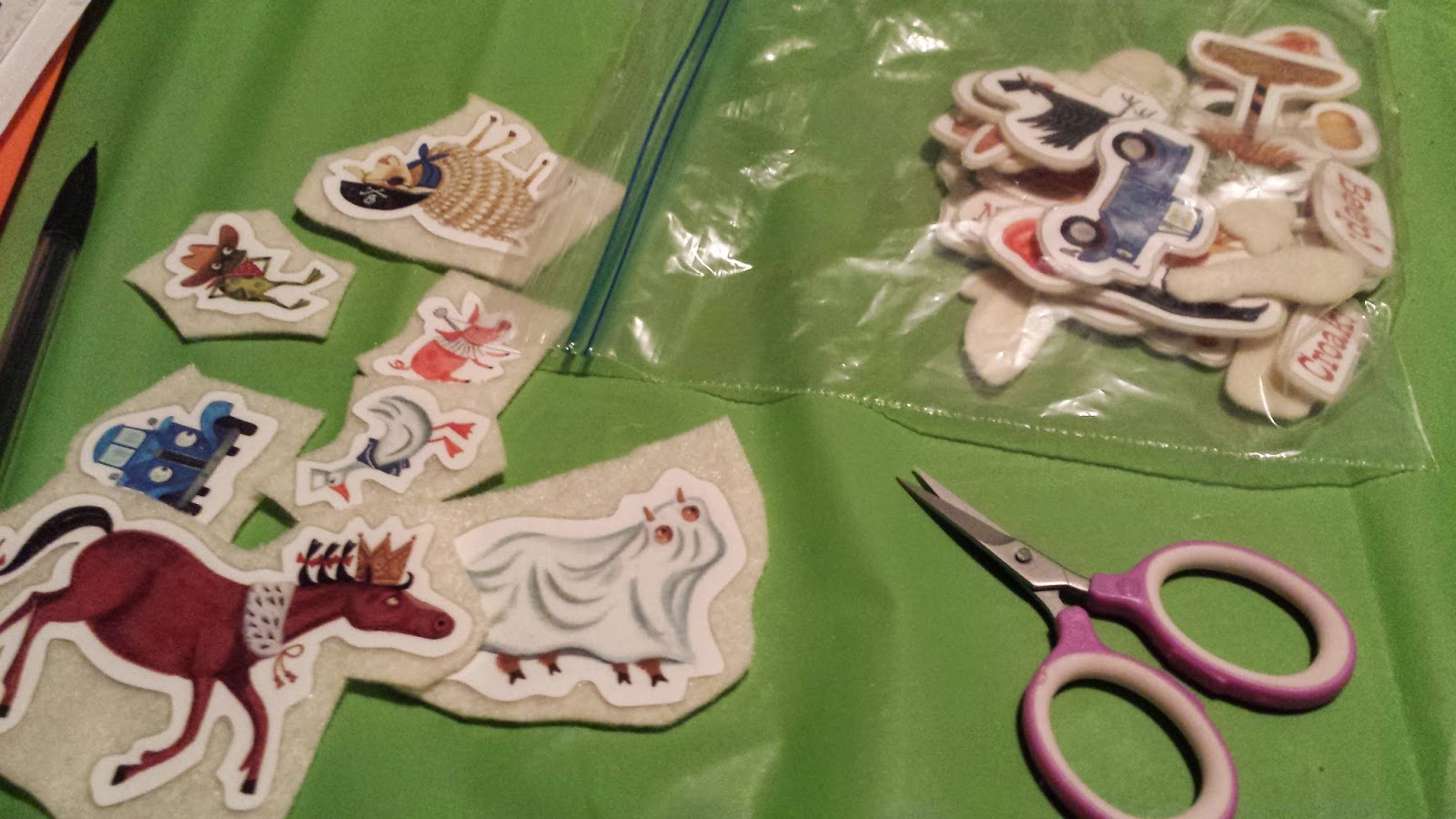 Then I set up a felt board. Since the characters are wearing Halloween costumes, I set up an autumn theme. We used some grass and some dry land (a farm after a harvest), some bare trees with one green leaf waiting to fall and some red leaves that have already fallen. I also added some greenery, a small house and two clouds. 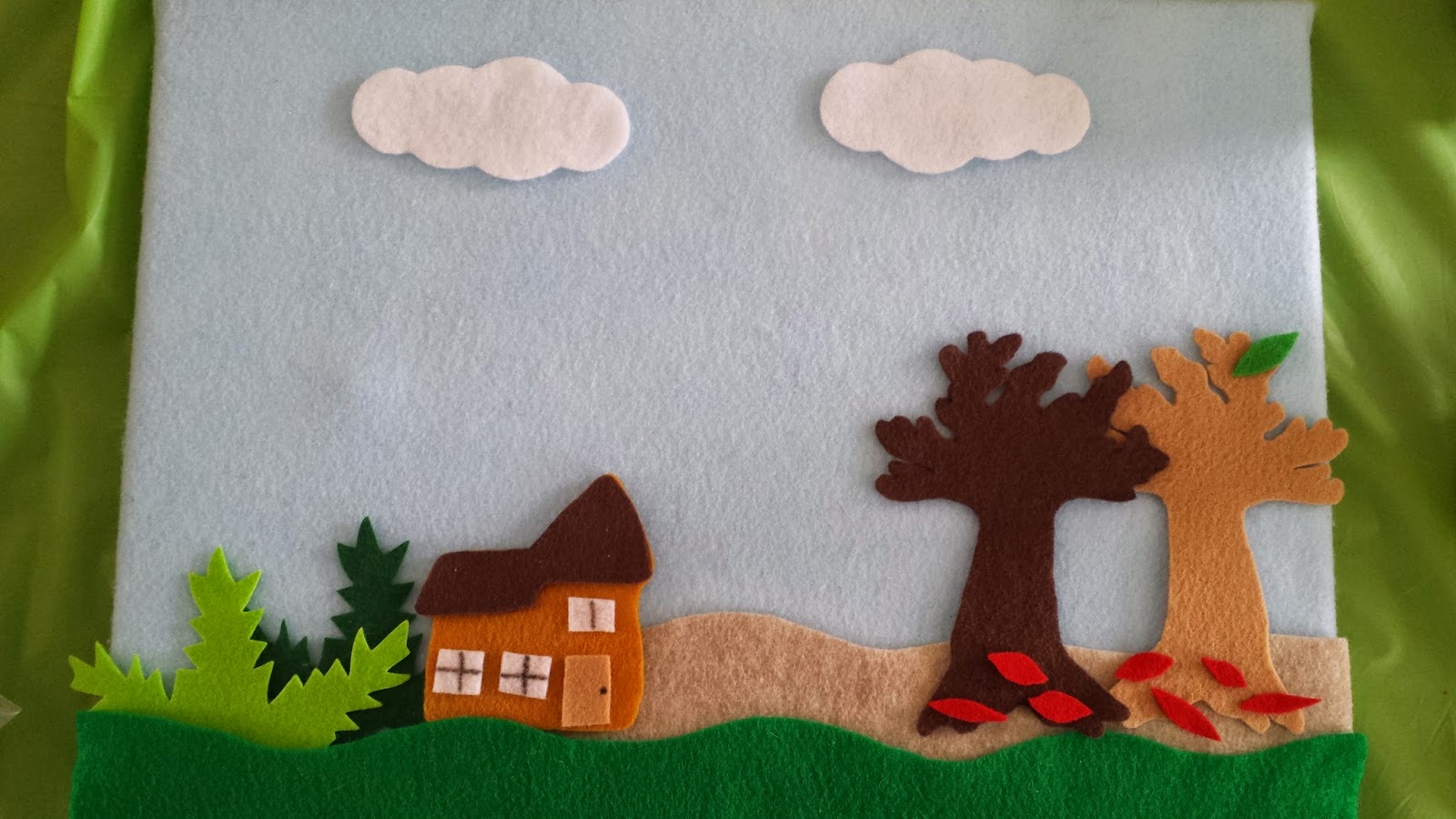 I set the pieces up in a small wicker basket. 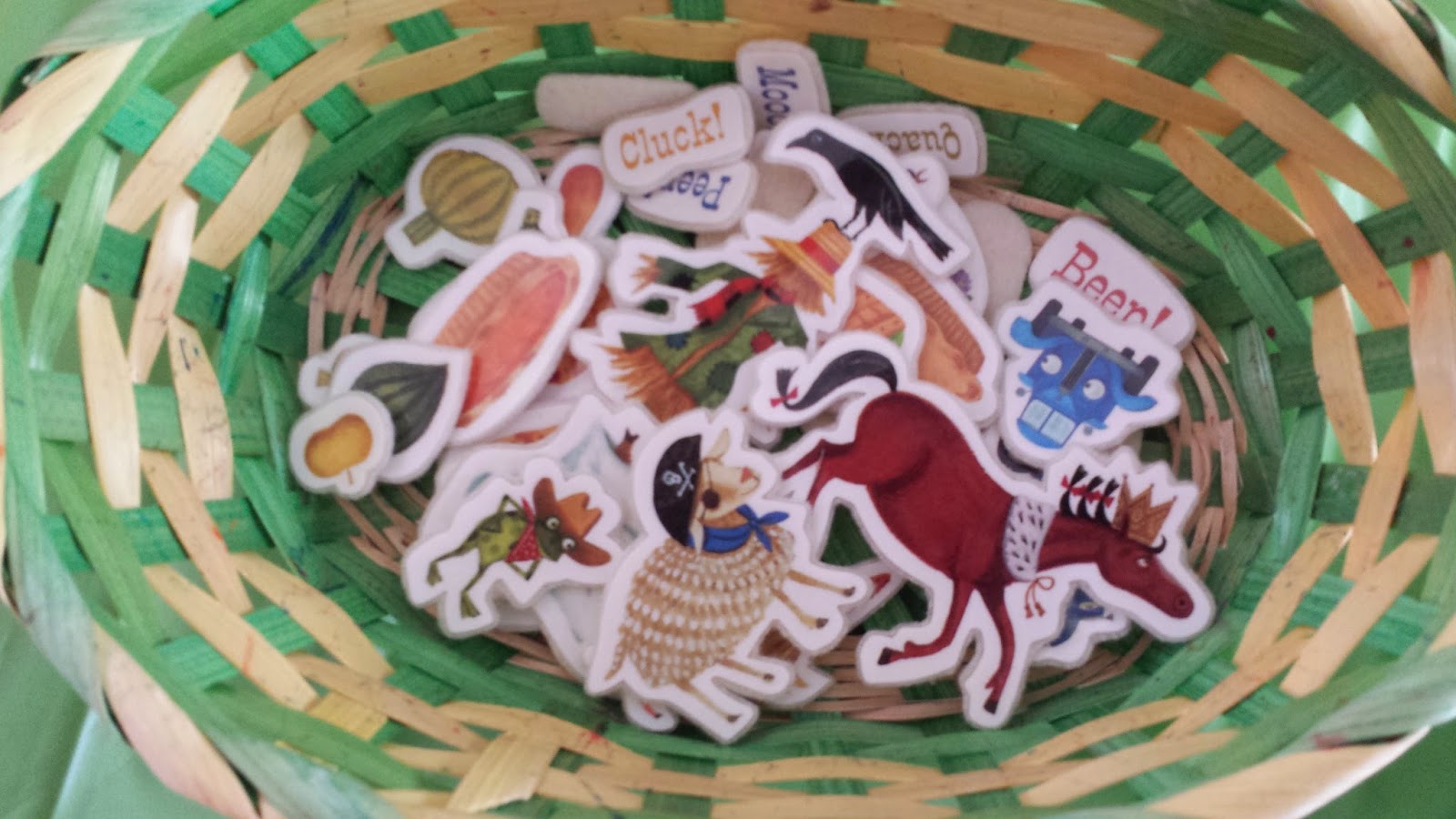 The kids eagerly set up the felt board with all the characters. They went on a parade and showed off their costumes to each other. 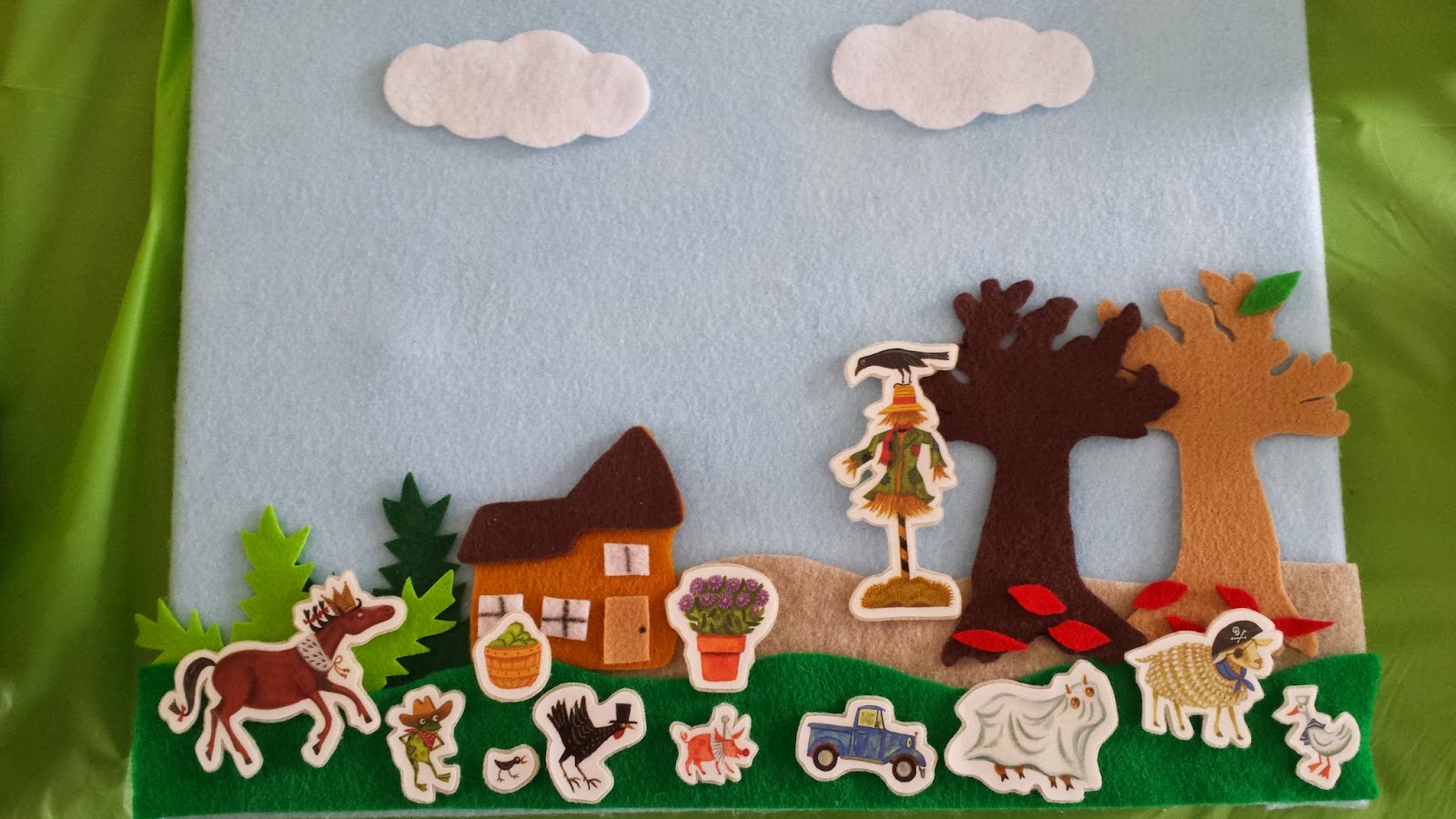 It was at this point that I realized Cow was missing! I quickly found Cow, trimmed the laminated edge and glued Cow to some felt. By the next morning the collection was complete! 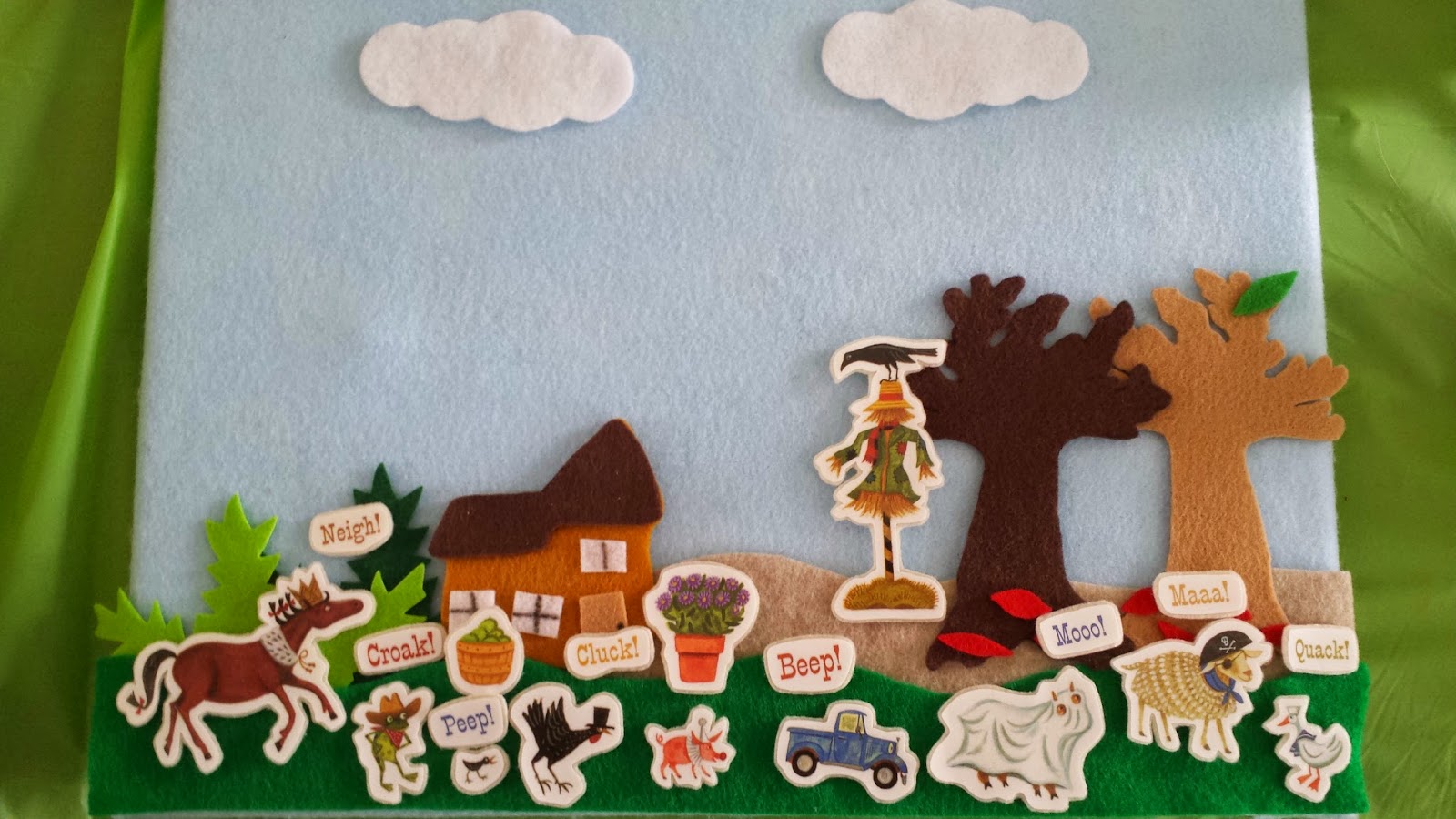 They were also able to practice matching the animal sounds, an added learning activity! 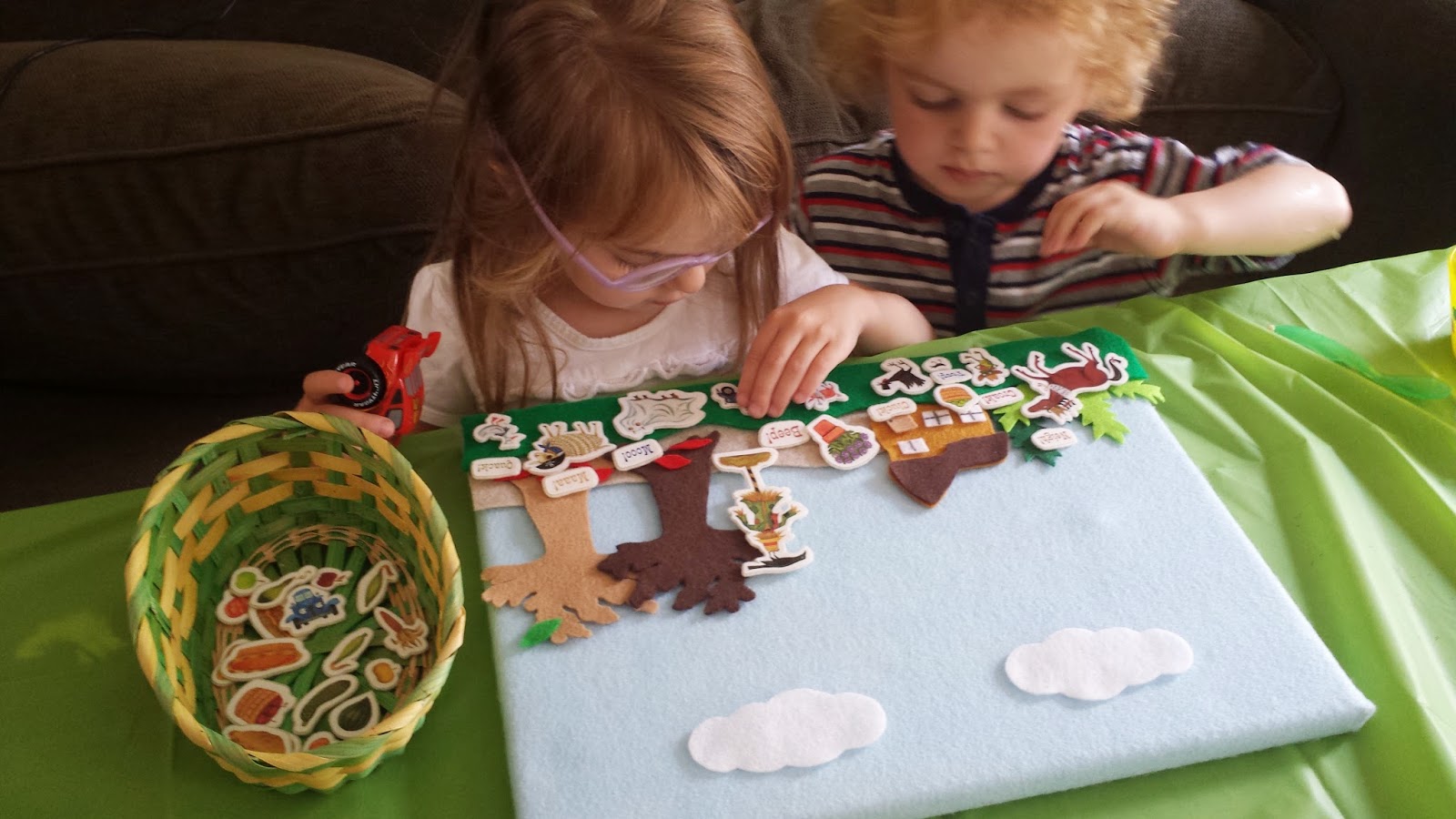 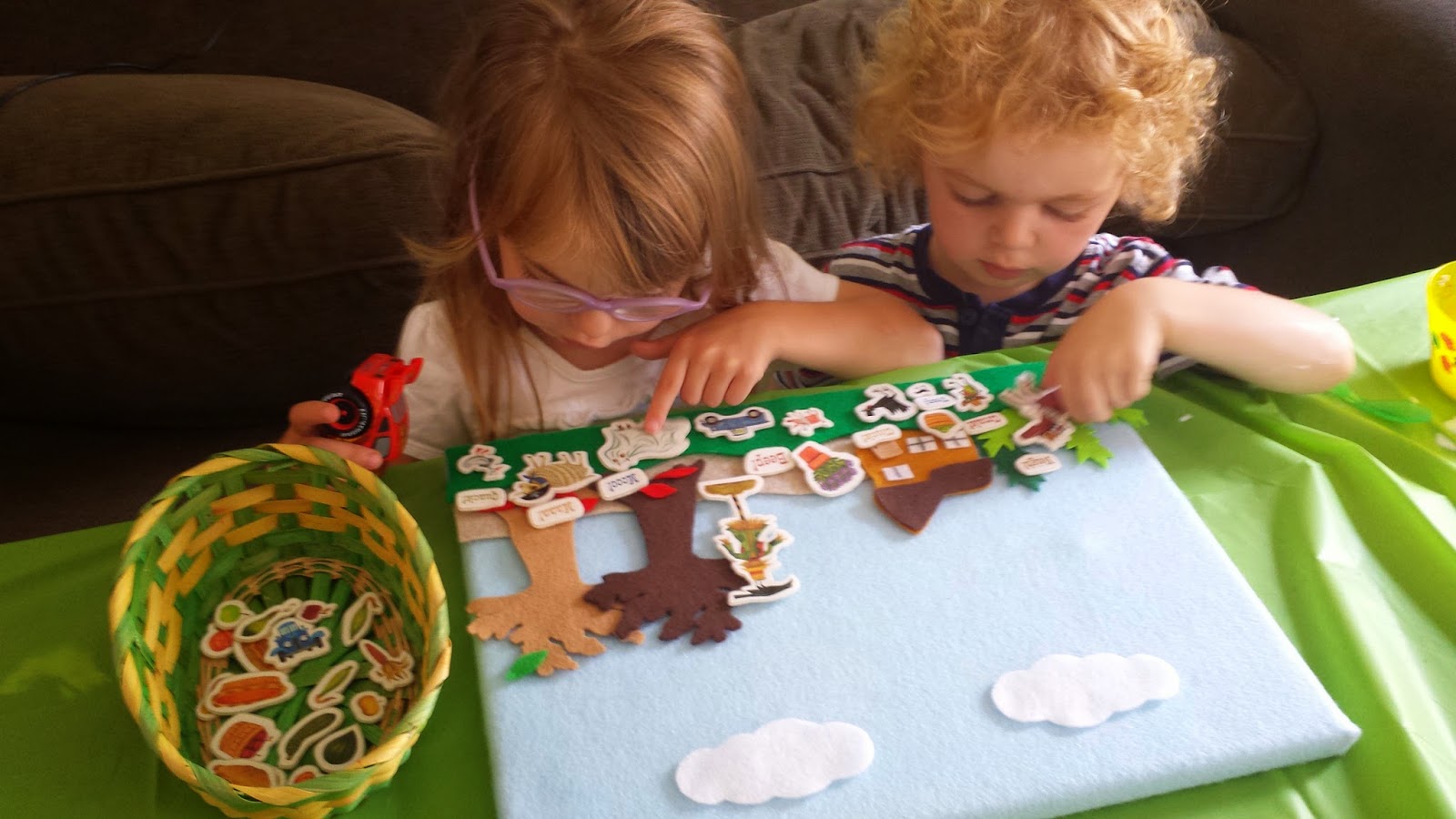 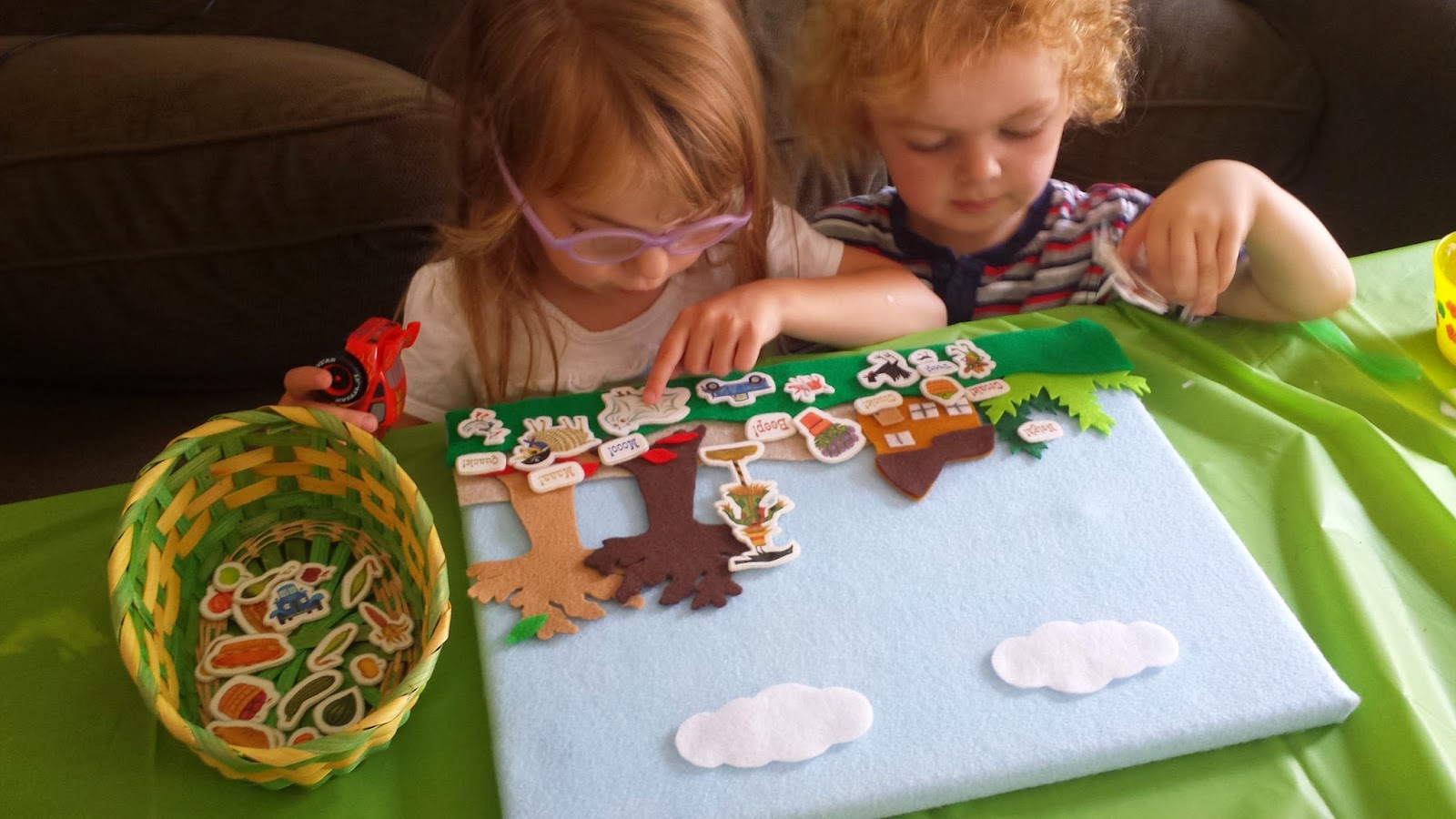 I hope that at some point there will be regular Little Blue Truck stickers available. Not that we don't love the Halloween costumes! 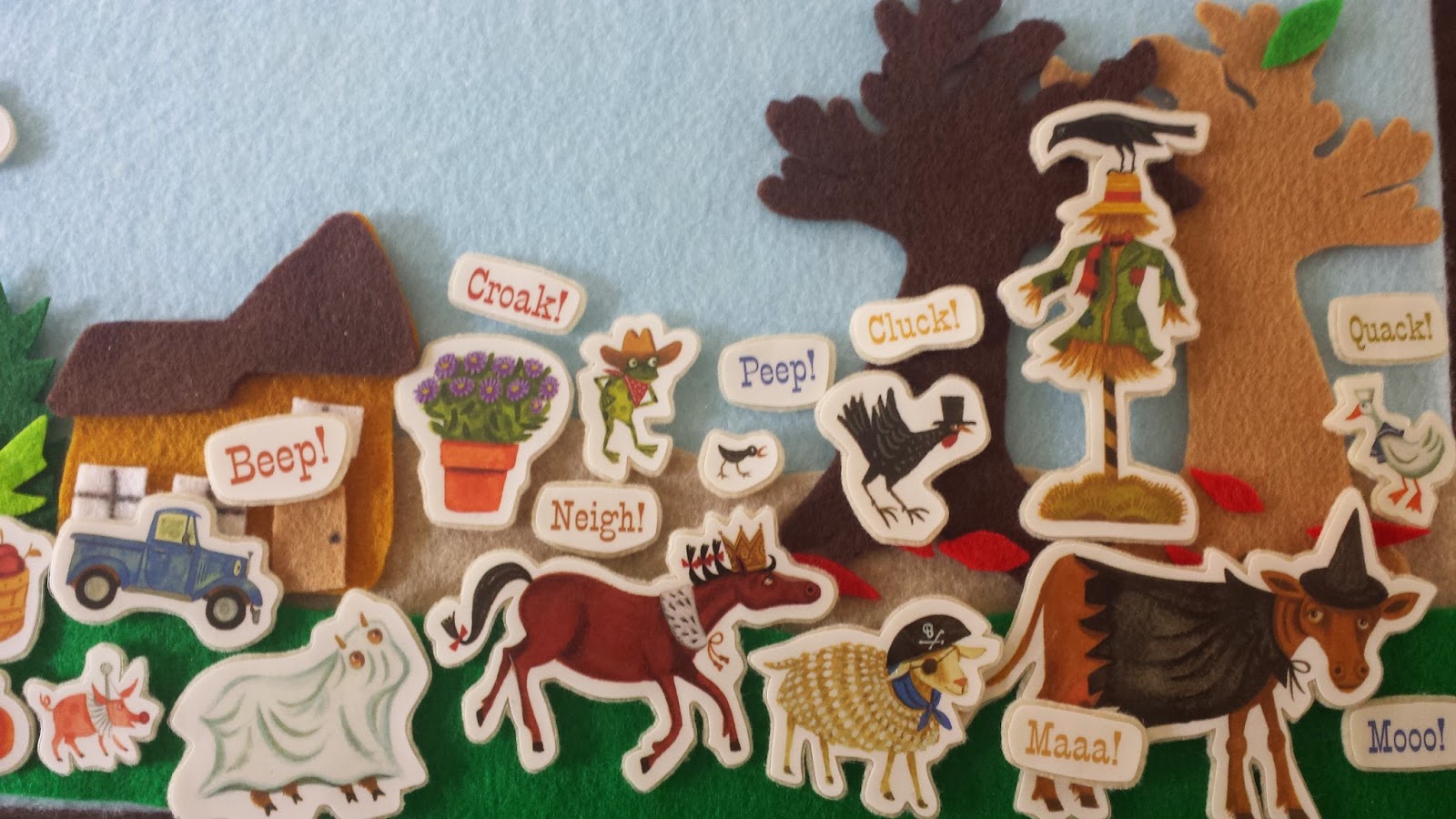 Does your child have a favorite book? Let us know in the comments and I might create a felt board based on it!