If You Were Me and Lived in... Book Review

What can you do with your If You Were Me and Lived in... books? You can use them for cultural or history studies and unit studies, which is what we did. Each book can be used for various activities, such as creating a timeline, using the glossary for vocabulary and spelling words, pretend play (playing roles depicted in the books, such as a Lord, peasant, or doctor from the Middle Ages book). You'll also learn about various occupations, food (which you can learn about further by cooking recipes in the kitchen), clothing, and recreation.

If You Were Me and Lived in...the Middle Ages follows the life of Aalis, the daughter of a standard bearer in William the Conqueror's army. Her family lives in a large, fortified stone house with a motte. She spends her days embroidering and sewing with her sisters. My grandfather hunts, so we had a venison dinner, and we baked homemade bread. We collected herbs from the garden. They did not want to test out the Middle Ages eating schedule, which was two meals a day, or pottage if you were a peasant. We used a Middle Ages sticker book to further explore the clothing of the time. The Middle Ages book addresses what life was like for peasants as well. They lived hard lives as farmers. The Church was also a major influence in the life of those living in the Middle Ages.

The book introduces historical figures, such as William the Conqueror, Clovis, and Charlemagne. We each chose a person from history who lived in the time period we were reading about and researched them further. I am teaching my children how to research and this was a perfect opportunity. They were able to look online and find books at the library with help. We chose the Middle Ages for our first unit study. We chose William the Conqueror (Munchkin), Joan of Arc (Bean), and Christine de Pizan (me - mom). After a week we each reported what we had learned about that person. We focused on key facts, such as their date of birth and death, what their name was and other names they were called, what they looked like (we each drew a portrait), where they lived, and what they were best known for. We tagged each one on our timeline for the year they "made history." When they are a little older, we will probably use activities like this to create lapbooks. 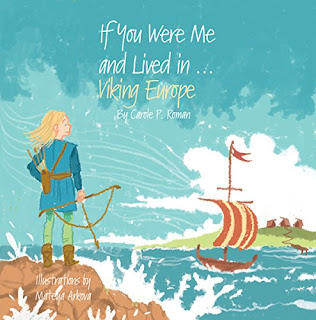 If You Were Me and Lived in...Viking Europe introduces you to Viking life in Northern Europe around the year 870 AD. You're given name ideas from that time period and what your family life would look like. In this book, you follow young Knut Ericson, son of a Jarl. Vikings were famous for their long voyages to foreign lands and raids. The Viking era depicted what life was like before the Middle Ages. Many things were similar. Medicine, for example, pretty much didn't change for a thousand years and they had limited options for those who were sick or injured. Food was plentiful for those who were part of the Jarl's family. They also drank a lot, with the adults drinking from horns so they had to drink it quickly or pass it around but never put it down, and children drank from cups. The Vikings written language was runic, which we learned.

The second book we focused on was Viking Europe. We use the first week of the study period to read the book, which usually takes 3-5 days, with 30-45 minute reading periods each day. After reading each page I stop and we discuss what was talked about, such as who a Jarl is or what mutton was. Sometimes this meant turning to the internet to look at more pictures. The second week we visit the library and find more reading materials, typically story books and at least one non-fiction book. Their favorite was the one on Norse myths. The third week, which we will start this week, will focus on what they want to research more about. Bean wants to learn to weave. Munchkin wanted to forage for food, but we're going into the wrong season for that, at least in our area, so instead he is going to learn to dye cloth using berries and plants. For the last week, we will focus on more hands-on lessons, cooking viking recipes, and our final project.

We used a laminated map to draw lines to the countries the Vikings visited and measured how long they would have traveled to get there. We added math into the lesson by estimating how long the journey would take and how much food and water they would have had to bring. We created a Viking ship using a large cardboard box and practiced rowing. It was a lot of fun!

If You Were Me and Lived in...Renaissance Italy The Renaissance took place over 500 hundred years ago, which really wasn't that long ago, although much has changed since then. It began in the Tuscany region of Italy and is most famous for the artists and inventors it produced. The Renaissance took place after the Middle Ages ended, and was a well-spring of creativity. Architecture, science and astronomy were making new changes. Life was making major changes, such as it becoming more common for children to be taught by tutors. Even girls were taught about art, music, and dancing, although they still focused on needlework. Children wore clothing like their parents and were expected to act appropriately. Clothing was important and represented your status in society. Forks were finally being used and important family members ate on porcelain dishes. Artists were in demand and are still remembered today as some of the best artists in the world.

If You Were Me and Lived in...Ancient China: The Han Dynasty is one of the most important periods of time in Ancient China. The Han Dynasty took place between 206 BC until 220 AD. During this period of time civil service and organized government was established. Paper and porcelain was also invented. The Silk Road was the most important trade route to the East. Merchants were created to transport Chinese silk and became very wealthy. Most houses were designed the same and men were the head of the family. All families set aside a special part of their house as an alter to their ancestors. Silk was very important to the Chinese and was used to make clothes. There were four major professions: doctors, warriors, scholars, and advisers. Below that were farmers, artisans, and merchants. School was free, but only available to boys. Girls were taught how to be wives and mothers. There were three major religions: Taoism, Buddhiam, and the teachings of Confucius. Boys studied poetry and practiced calligraphy.

Carole P. Roman is a children's author who began writing on a dare. Since then, and many awards later, she has written over 30 books. You may be more familiar with her Captain No Beard series or her If You Were Me and Lived In... Country series. Her picture books, and cultural and historical books are perfect for children in elementary grades.