Bean loves sitting with me while I read books and she will point out the letters that she recognizes (her favourite is B). So we set up a bin filled with oatmeal and assorted letters and gave her some flash cards and a few toys. The goal was to see if she could match the letters to the ones on the flash cards. She did very well, although she did not do all 26 letters. She only matched about a dozen. Munchkin spent most of the time digging and plowing through the oatmeal and only looked at the letters long enough to stick them in the back of his truck. He did pay attention to Bean when she was searching for certain letters in the bin and tried to help her by collecting some and dumping them on the flash cards. :)

This is our biggest bin that we filled with two big containers of oatmeal. It only filled it about two inches, but that was deep enough to bury the letters. 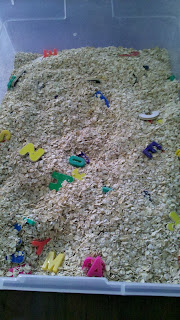 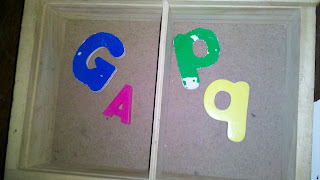 We decided to use the Playskool flash cards. They also have Winnie the Pooh, Disney Princess and Mickey Mouse, but these ones are much more basic and had more objects that matched the toys we wanted to use. 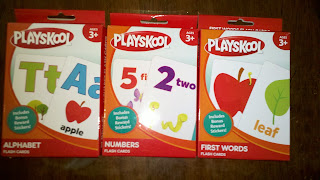 I let Bean decide what letters she wanted to work on and she did them in no particular order. We sing the ABC song a lot, but we were focusing more on just recognizing them and not the order that they go in.
She chose the card first, read the letter and then went searching in the bin for the letter that matched it. For this she only looked for the uppercase letter. Then she searched in the toy bucket for the object that matched the card and she said the word and I spelled it out for her. 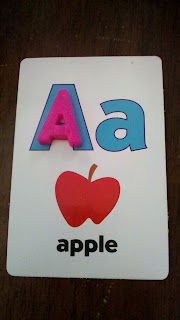 We were focusing on letters, but it turned out there were a few numbers mixed in, so then I got out the numbers cards and they did a few of those as well. After she got used to me spelling out the words for each card, she started to add more letters. This was her only successful attempt (some letters she couldn't find and I think one of those O's is technically a zero). But she tried! I was so proud of her. :) 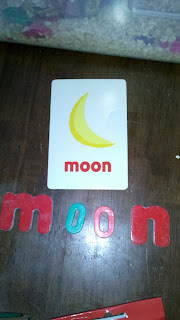 Matching a few letters to a toy. 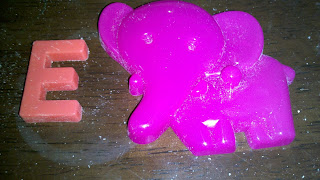 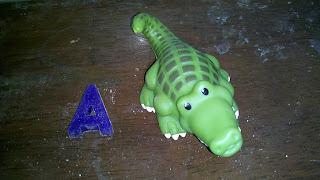 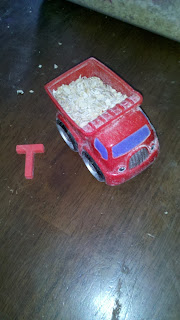 Munchkin loves sensory play and had so much fun scooping and dumping the oatmeal. This was a perfect bin that they could both enjoy (and yes he coloured on his forehead with marker). :) 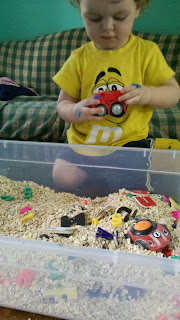 That was a very busy truck. It got loaded with oatmeal and sent on its way about a hundred times. I don't think it ever made it to its destination without an accident. It was very spill-prone. 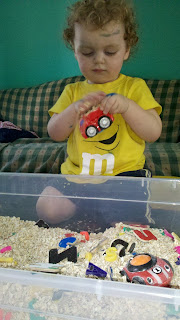 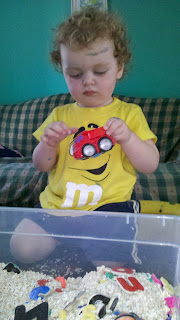 It's called a dump truck for a reason. :) 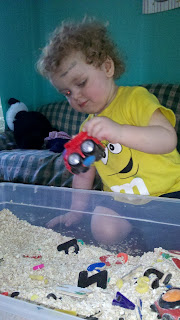 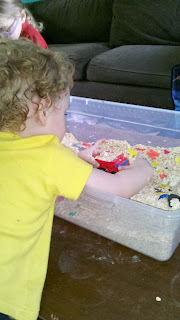 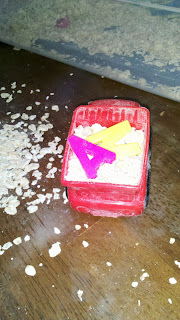 Afterwards, when Bean was done searching for letters, she decided to focus on just the cards and separated them in this box like she did with the uppercase and lowercase letters. On one side was the letter and on the other was a word that matched the letter (many of the letters had multiple words to choose from). She occupied herself with this for quite a while. 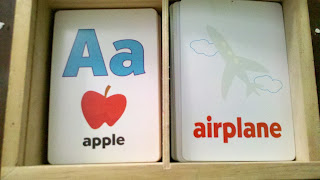 We also incorporated some of the letters into our bath time ritual. Normally we play with musical water toys in the bath, but we fished for letters instead. The water was really bubbly and it was so fun to fish for the letters and see if we could "catch" them. Munchkin LOVED it. He enjoys fishing quite a bit, even though his rod can only catch magnetic stuff. I can't wait until I can really take him fishing. :) 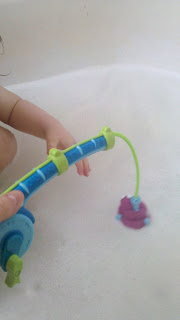 Any letters that were caught were collected and stored in their fishing boat. We also did a few other activities, like only fishing for a certain colour letter, which Bean of course loved since she loves matching colours. :) 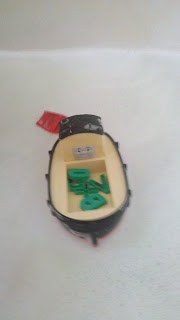 It was very exciting and fun to spend the day working with letters. We can't wait to try more letter activities!