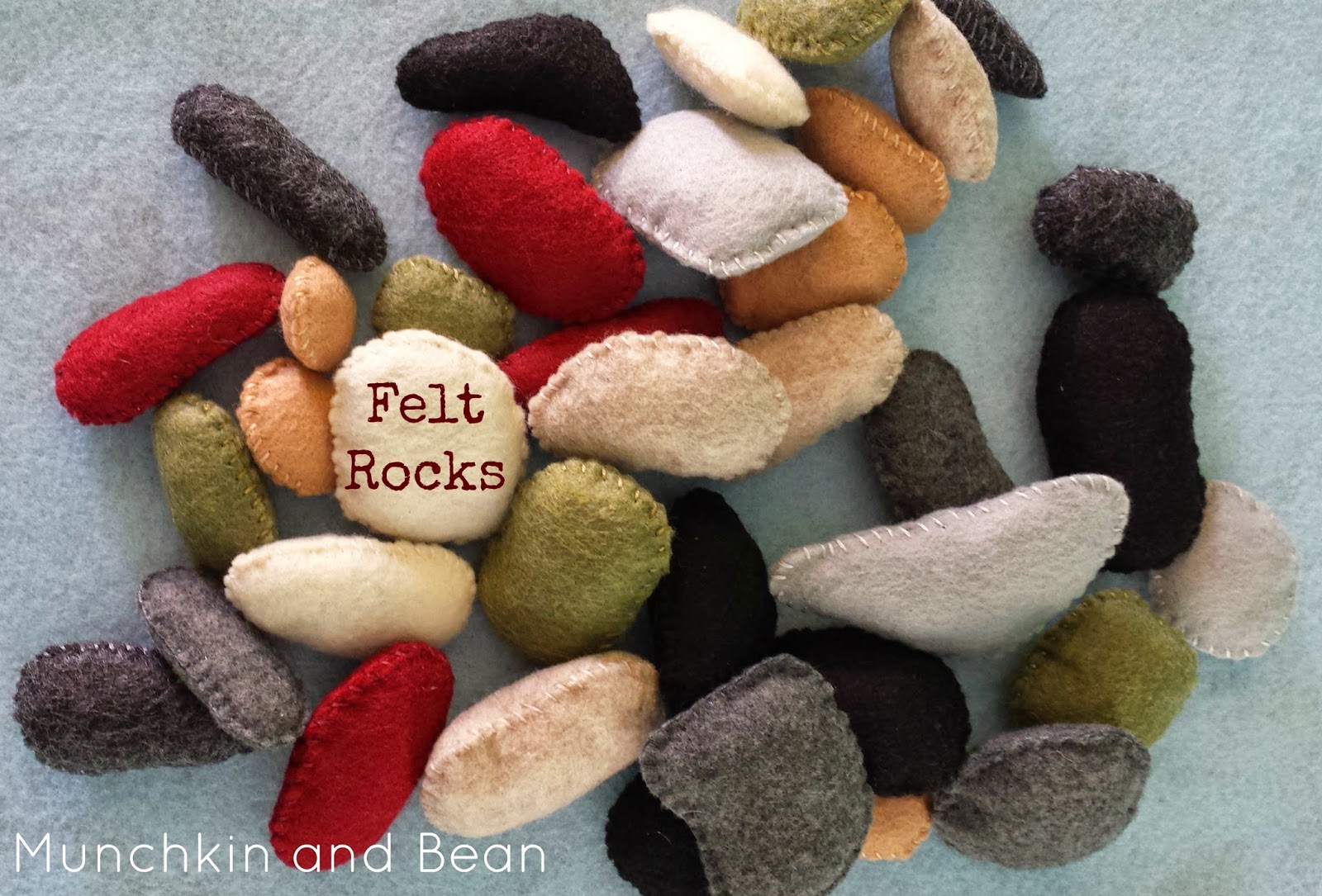 
So I'm working on some loose pieces for felt small worlds. These will all add up to a whole playscape that will fit on our felt-covered train table. I have a few ideas for play mats that I'm working on which are based on various habitats (such as river, grassland, tundra, dessert, forest, etc). Of course we will be using our Safari Ltd Toobs

! Their toobs are usually separated by habitat, but you can mix and match as kids are want to do. :)

On to the felt rocks! I started by layering two felt sheets together so that they were all the same size and cut out different sized squares, rectangles and the occasional triangle. 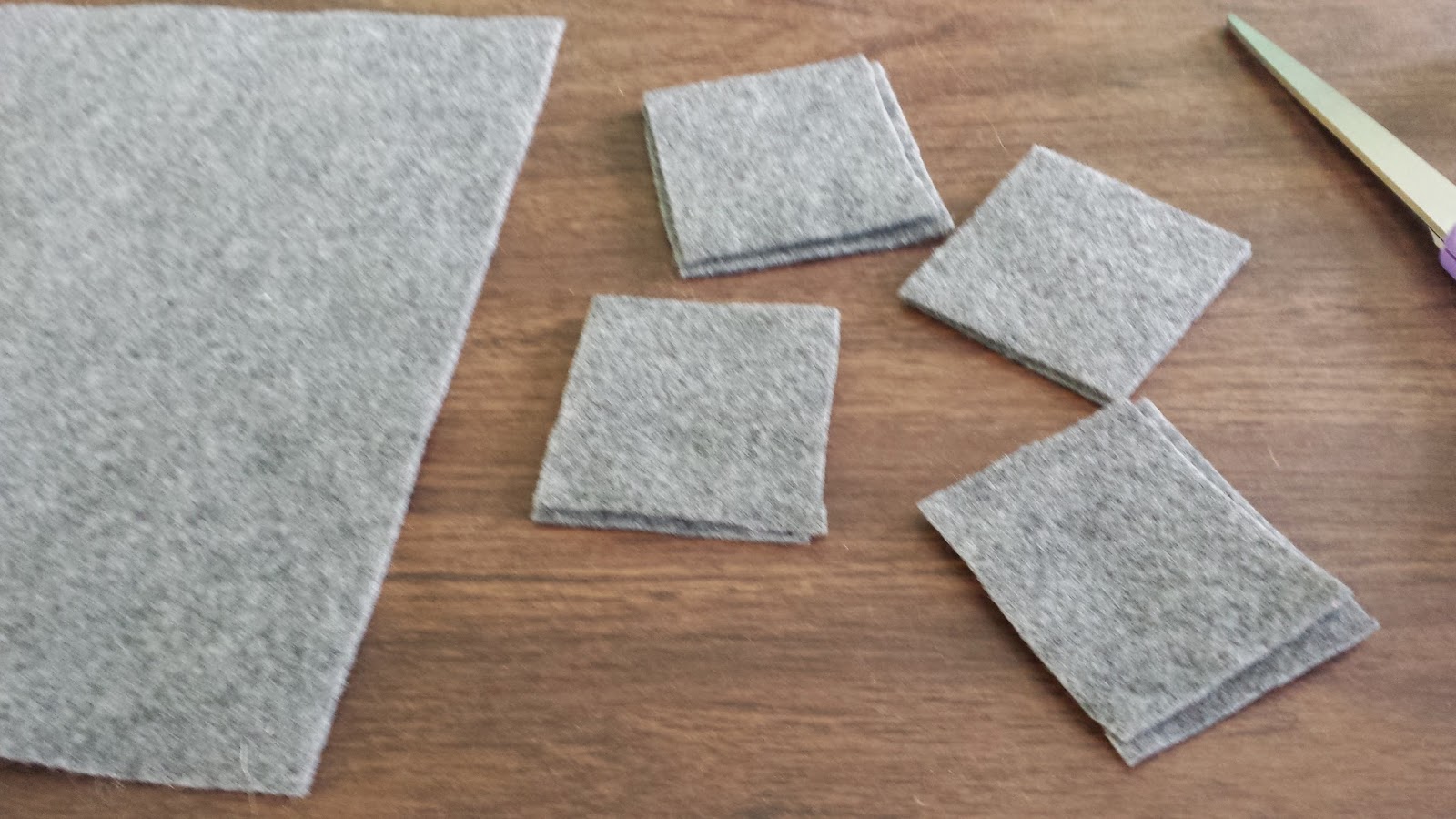 Then I cut out random shaped rocks. I mean, they are rock-like. But I aimed to make them similar to what river rocks look like. I hope I achieved that! I also made sure to keep the felt sheets together so that they line up perfectly. I recommend sharp scissors, preferably fabric scissors

like these, if you are cutting through multiple sheets of felt. It makes a difference! 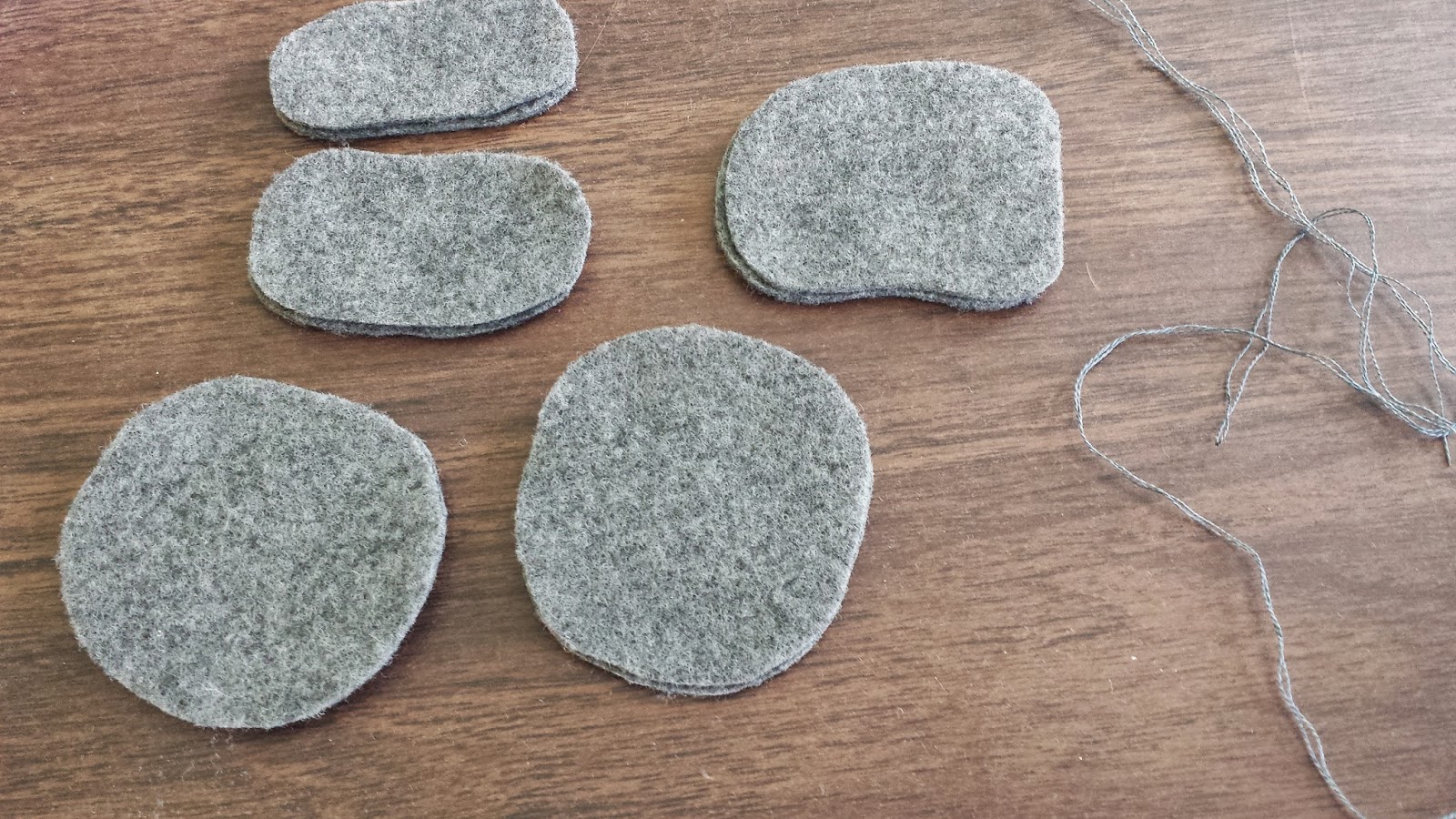 Then I sewed along the edge. For my first batch I used a blanket stitch, but I decided I didn't like the way it looked. So for the rest of the rocks I used a whip stitch. This allowed them to fluff up more easily! 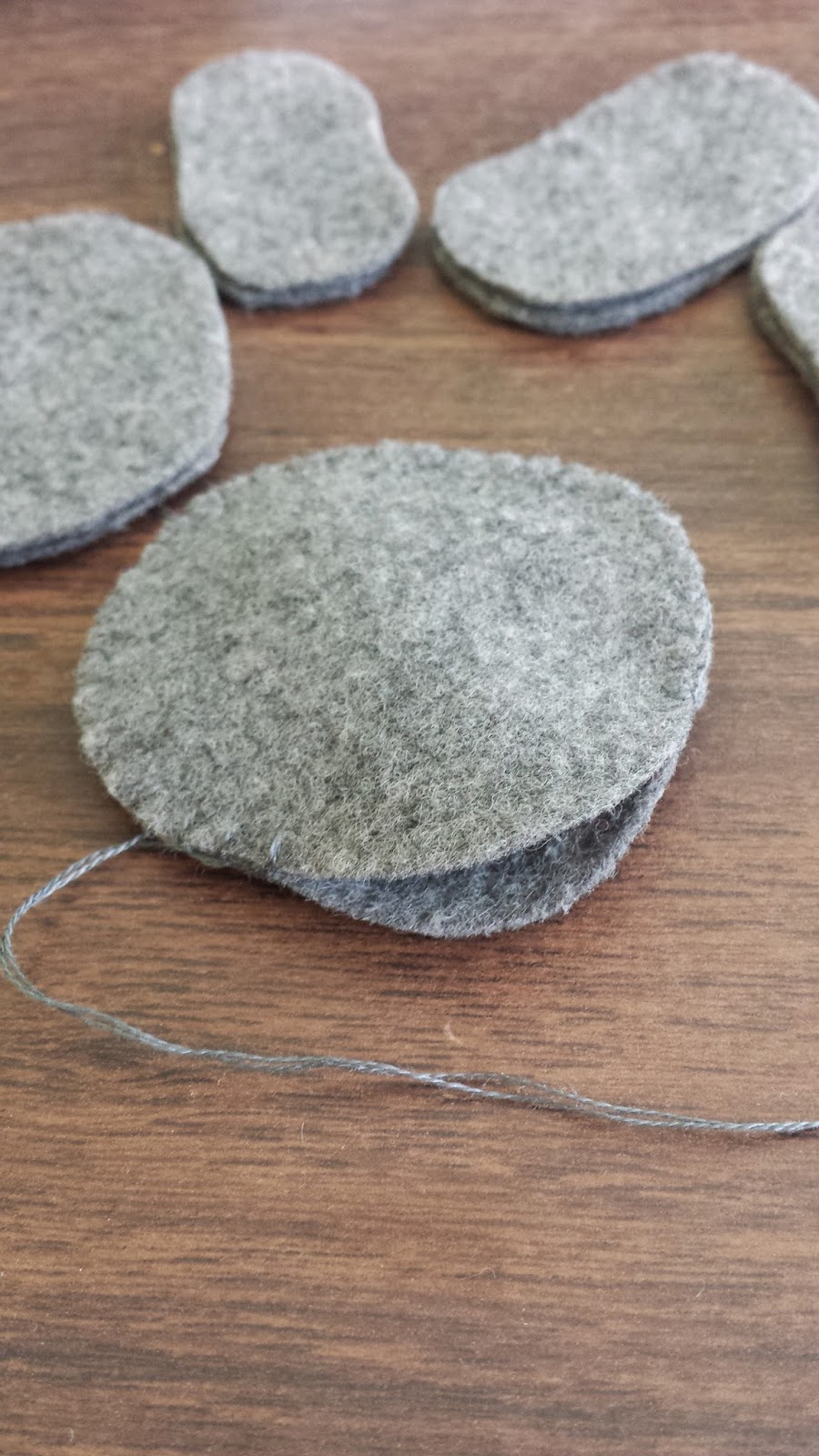 And instead of filling them with regular poly-fil stuffing, I used felt scraps! Because I save them like a hoarder, knowing that someday I'd need them. And they worked wonderfully! The rocks are firm and lumpy and perfect! I honestly considered filling them with sand or pebbles, to add some weight and more texture to them. But I worried they would turn into fun throwing toys... So I used felt scraps and I am so glad that I did! 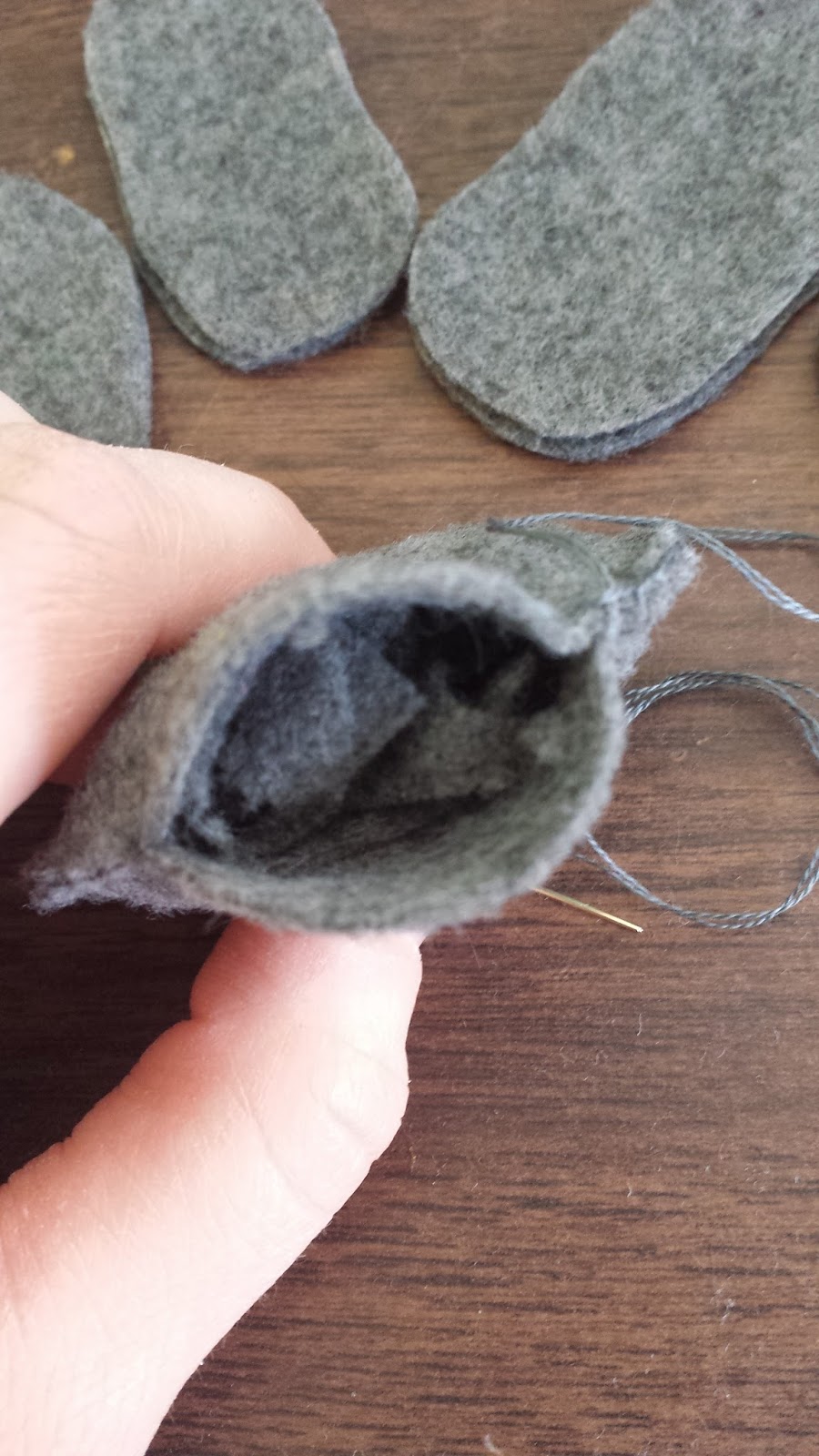 I closed off the stitches and tucked in the threads. This is what it looks like with a blanket stitch and you can see that the edges stick out a bit. 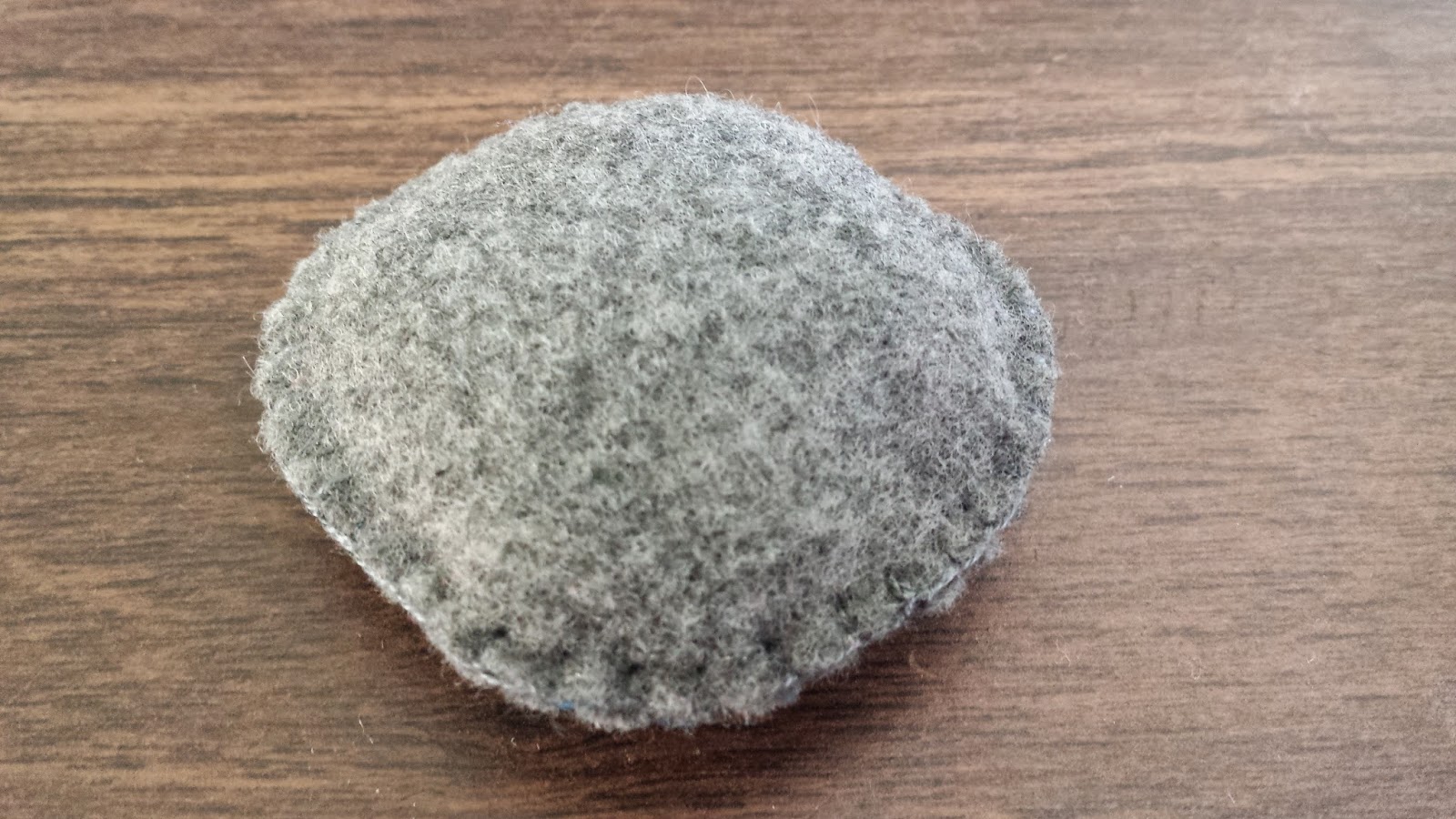 Am I crazy for saving so many felt scraps? Naw... Even scraps can have a purpose! 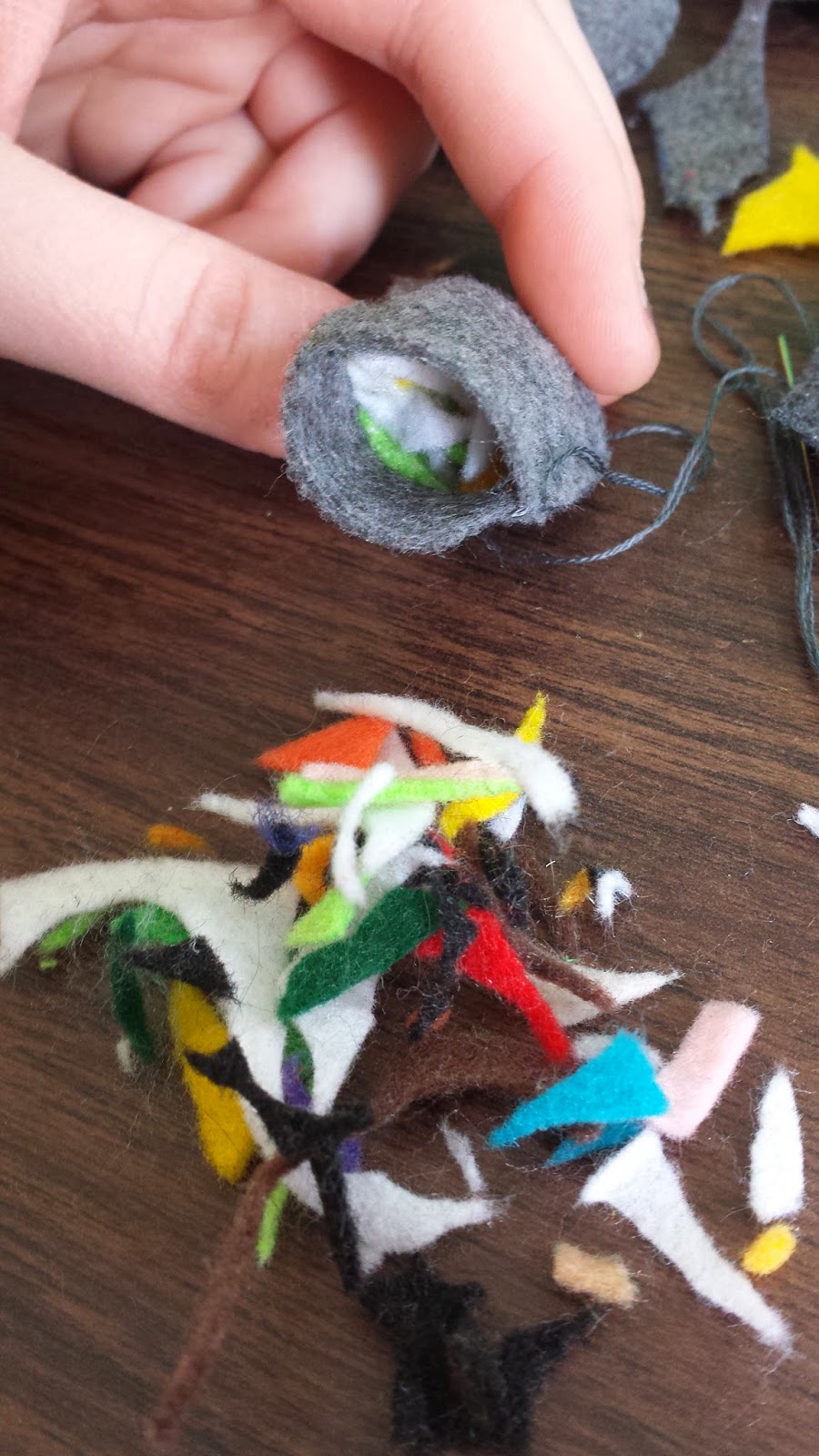 First batch with the blanket stitch. It was at this point that I decided I wanted a small army of rocks and switched over to the whip stitch. Using the whip stitch I made sure not to sew them too tightly. If they are carefully sewn without being too loose, the edges won't stick out at much and they will line up smoothly when they are fluffed. I made sure to stuff them to almost bursting because the felt inside settles and needs to be squished up and smooshed to give the rocks a lumpy shape. :) 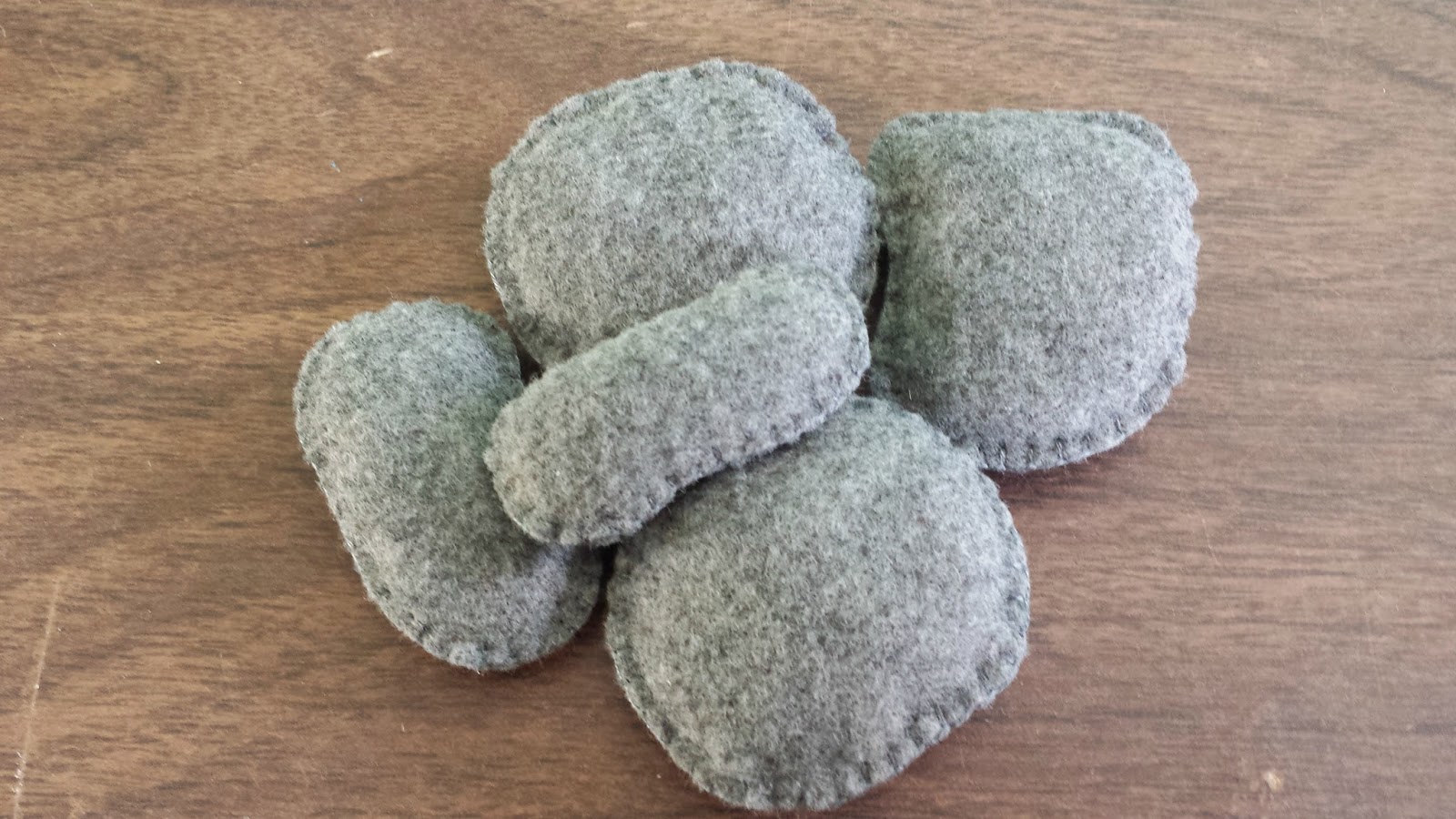 I picked out some more colours. I stuck with natural rock colours and included a "moss stone" and red stones, like you find more commonly in the dessert. I picked out DMC embroidery floss colours that most resembled the felt. Some were perfect and others were a bit off. But oh well! ~ 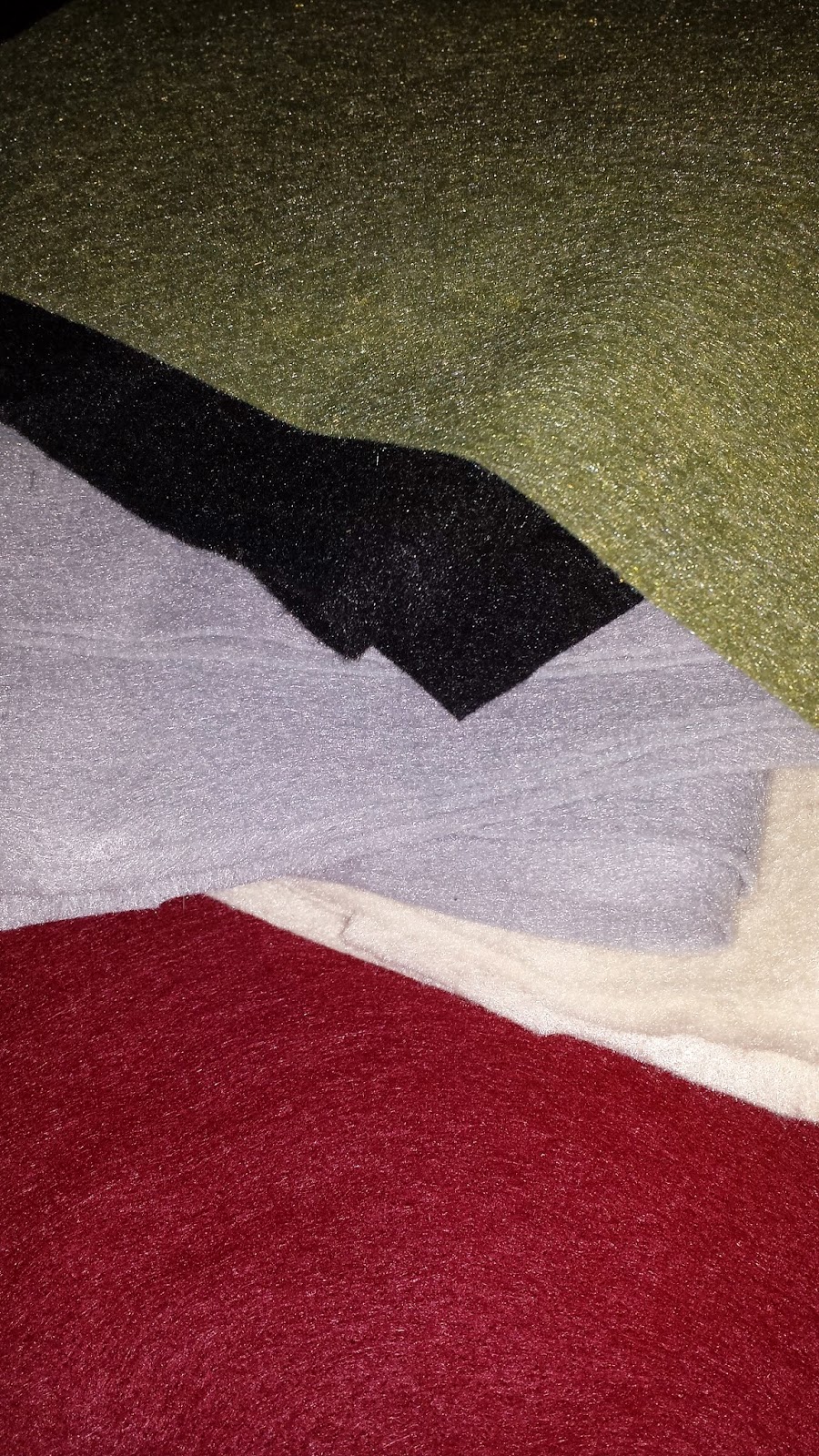 Ok, so as much as I loved how they looked flat and spread out like this, I had to turn them into 3-D rocks. But now I totally want to make a river rock spread like this that is all sewn in place. I love it!! 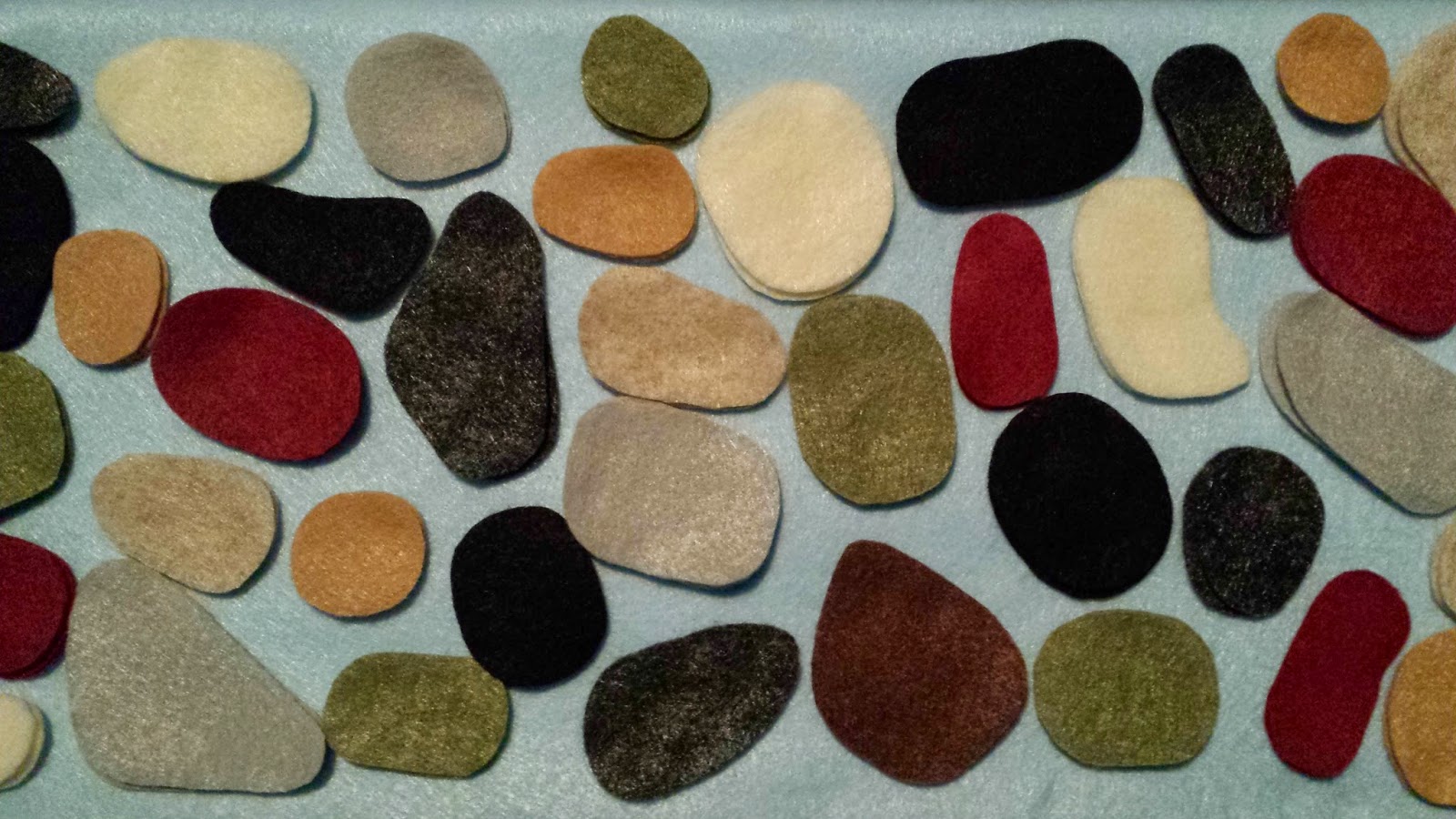 Bean, I mean Spider-Man, is my little sewing buddy! I gave her a piece of felt, a yarn needle

(they are large and blunt tipped, but still sharp enough to pierce through felt) and tied on some embroidery thread. She ended up making a kite that she swung around the living room for an hour. :) 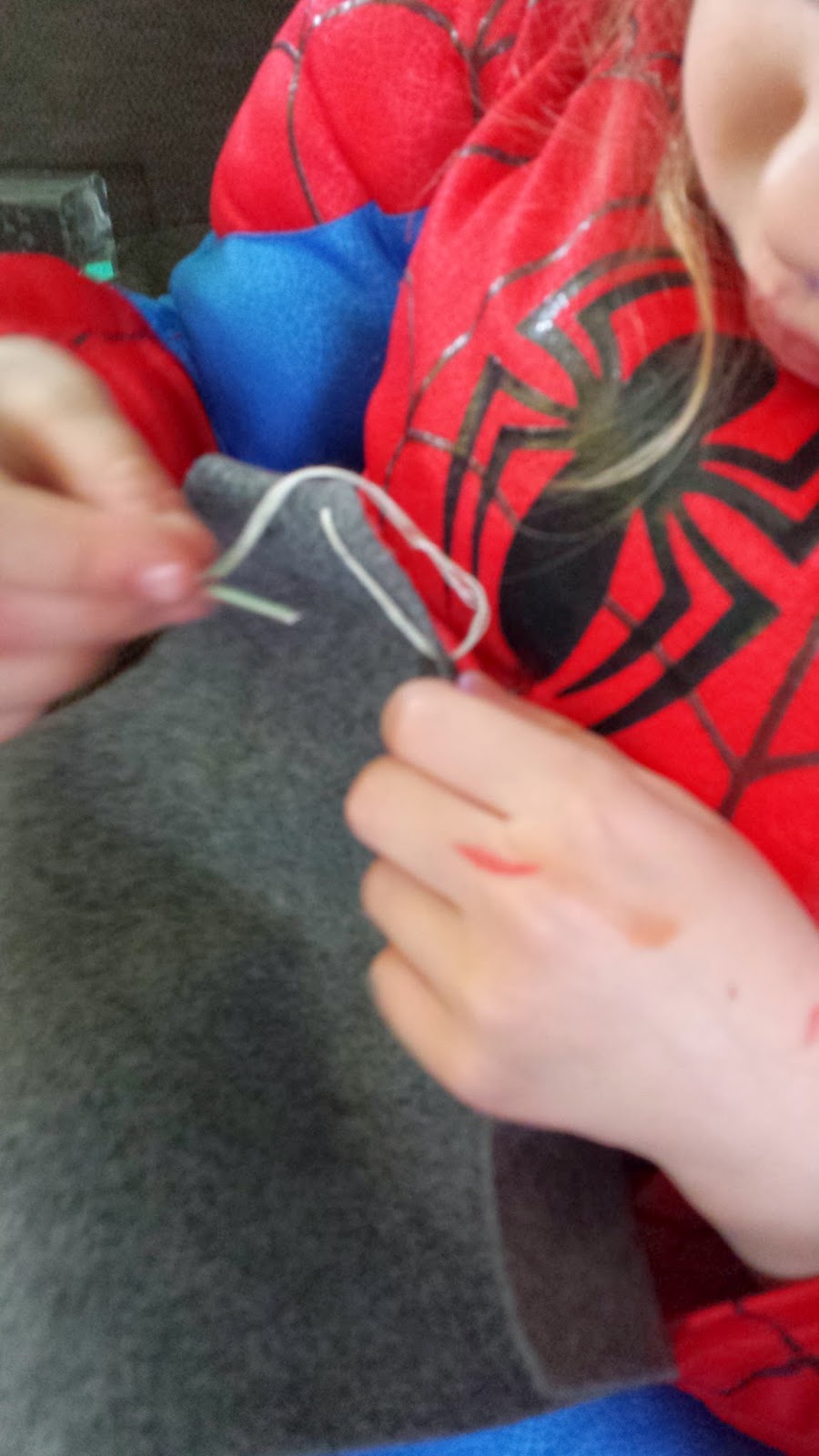 Flat rock vs 3-D rock. Personally I really like the 3-D rocks and I look forward to seeing how the kids use them in their small worlds! 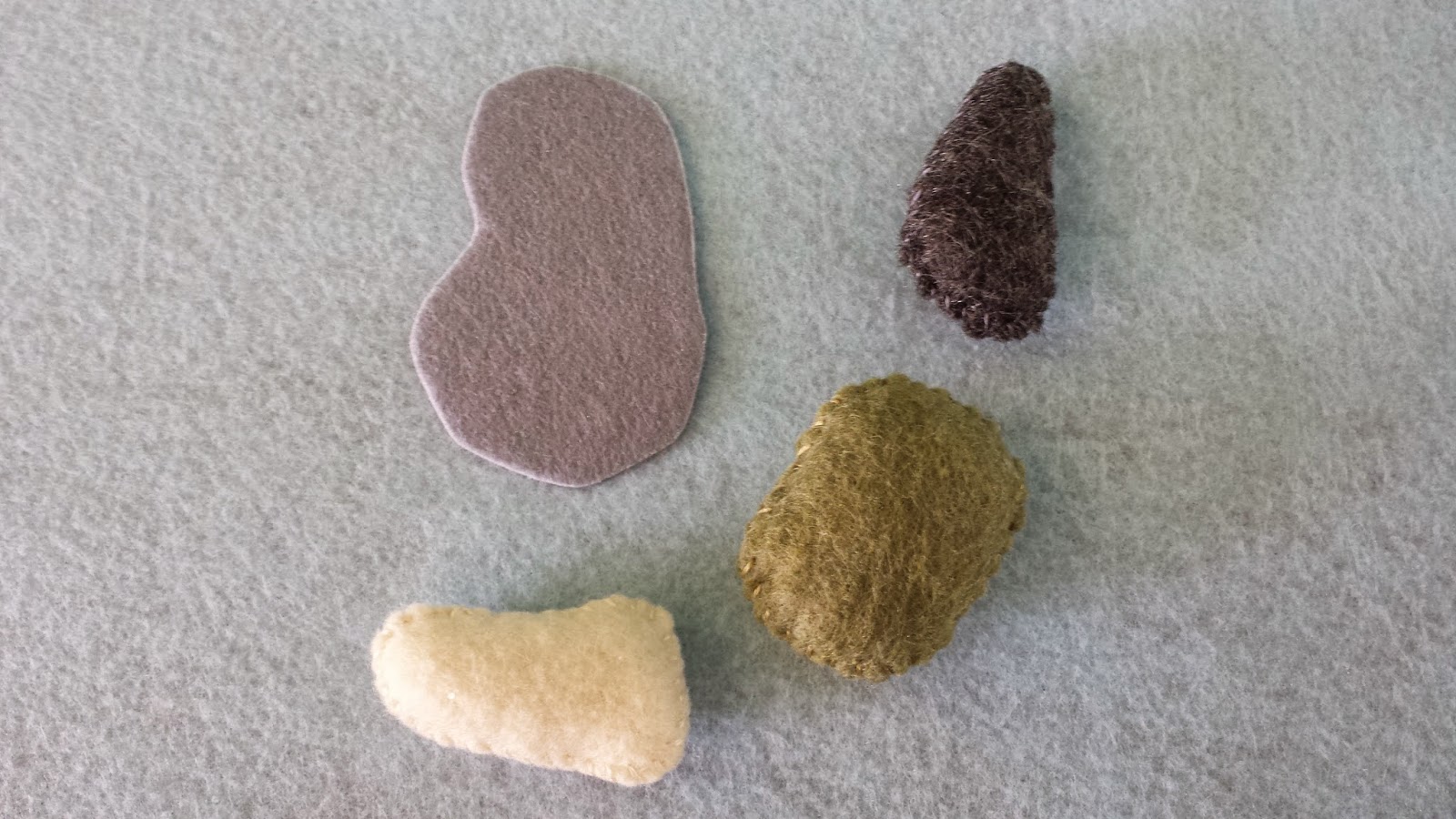 As I said, a small army. :) And for some reason the red rocks look way brighter in this picture than they actually are... 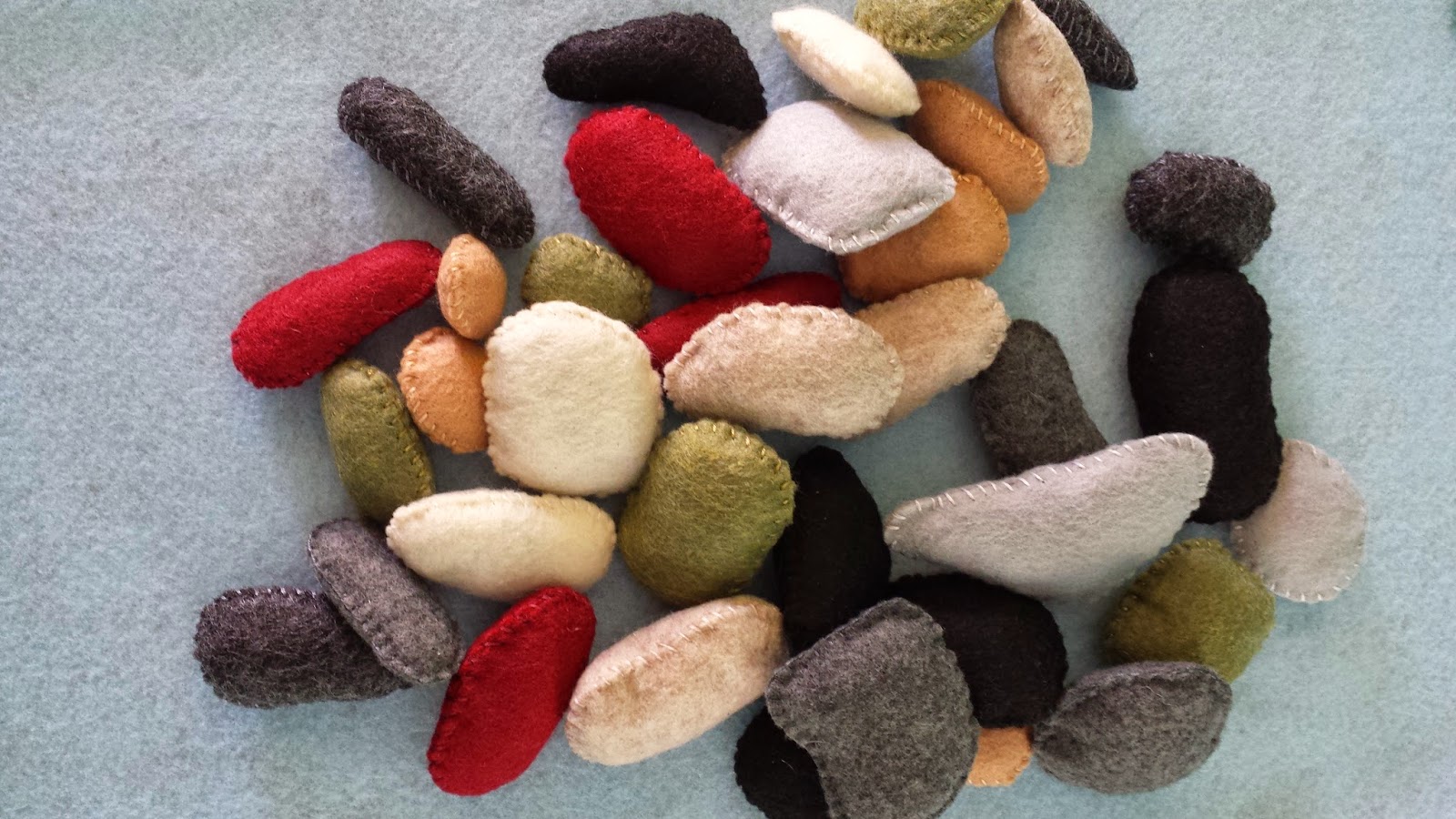 My kids have only seen a few of the finished rocks, and since they are visiting their aunt today, I used the time to set up a fun playscape for them to come home to! I decided to go with a simple river scene. I cut out a few logs and lily pads and added in some random leaves and scattered the rocks around the light blue felt river. (This makes me seriously want to invest in some gorgeous playsilks for small worlds like this! If you have never seen silk being used for play, I recommend checking out Sarah's Silks. They are lovely!!) 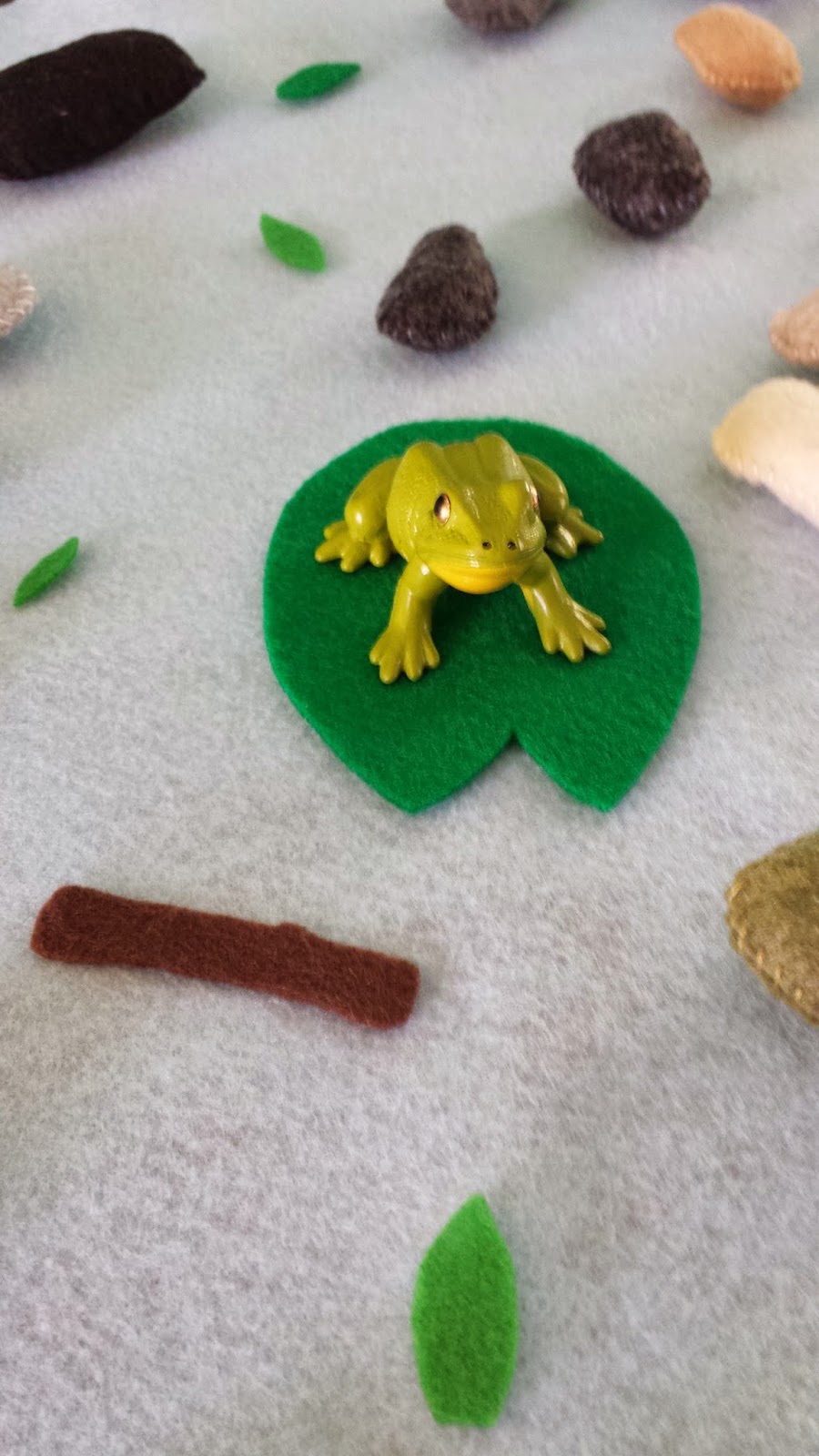 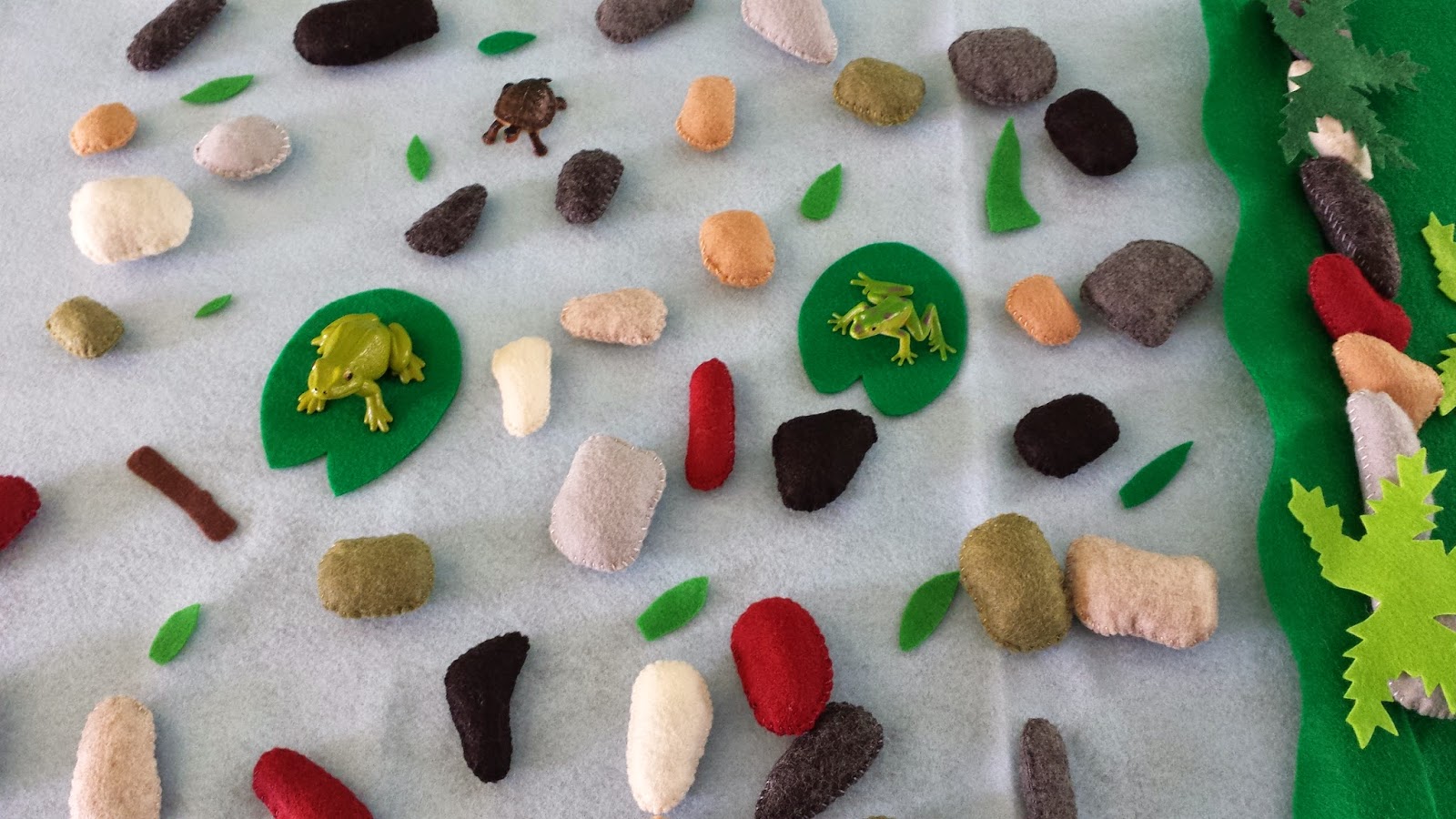 You could even add in a frog life cycle set

to learn about while they play! 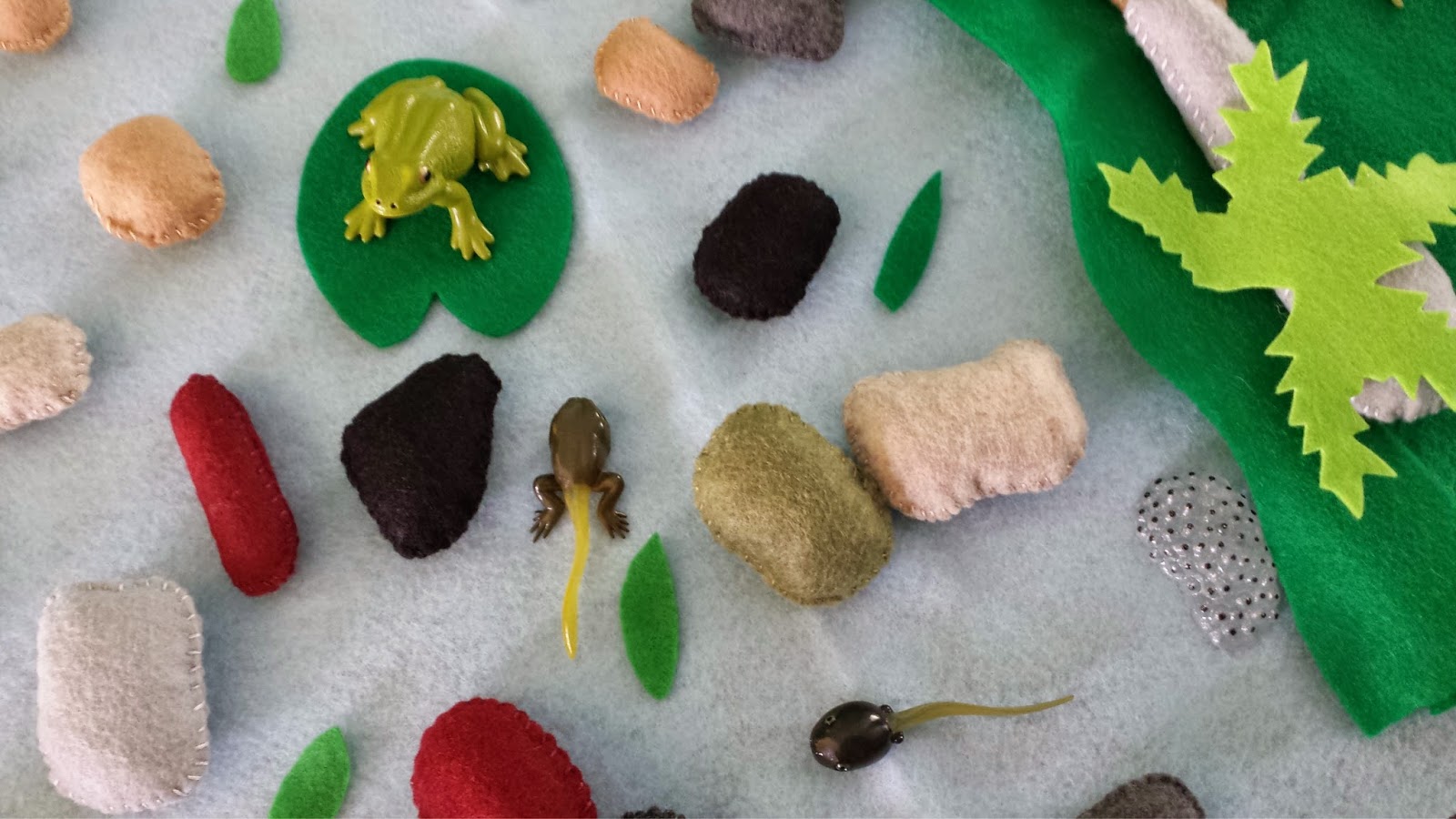 I added in a few buggy friends to join the fun! 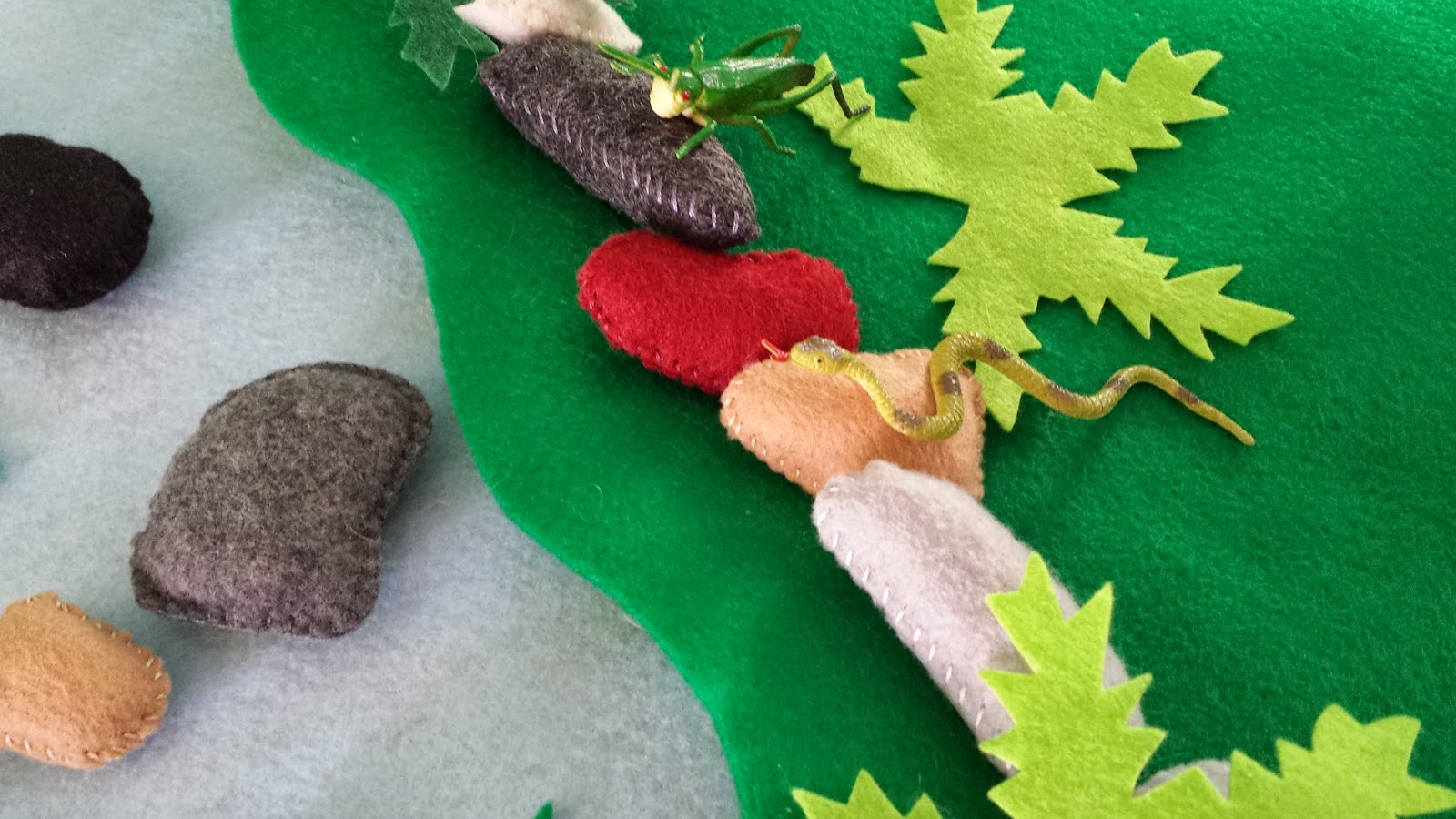 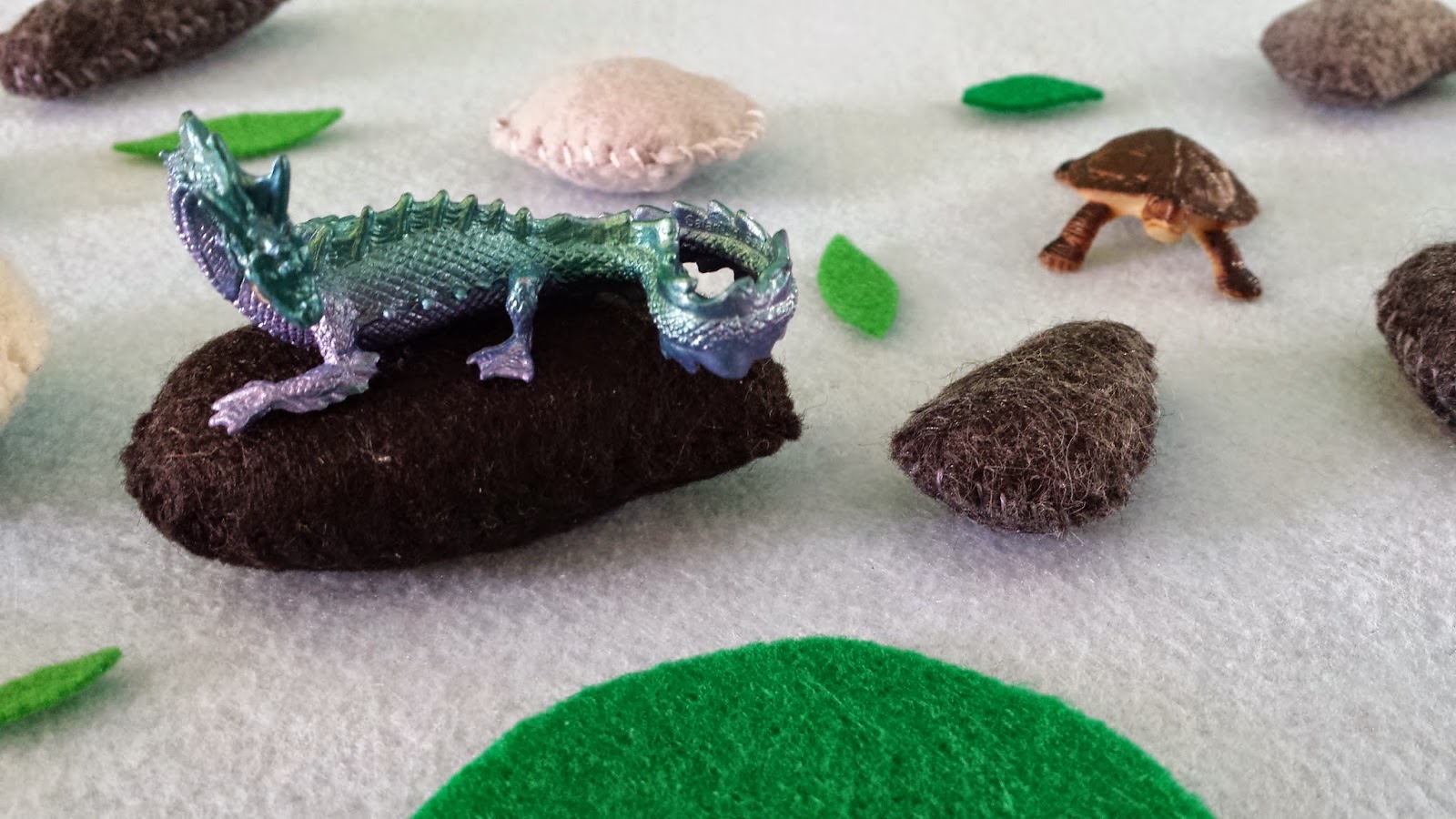 Depending on the river, you could add crocodiles and alligators and even a swarm of turtles! 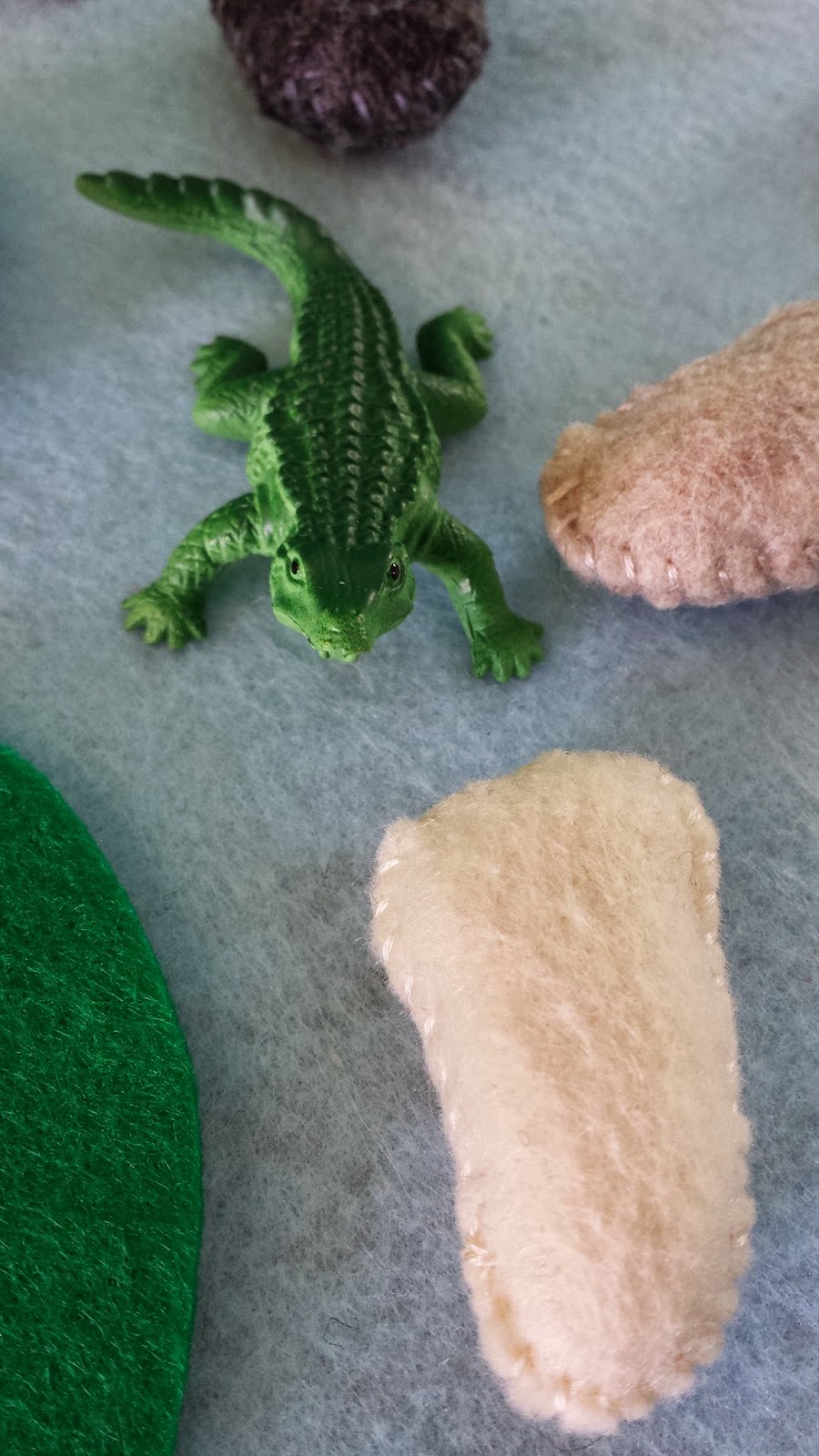 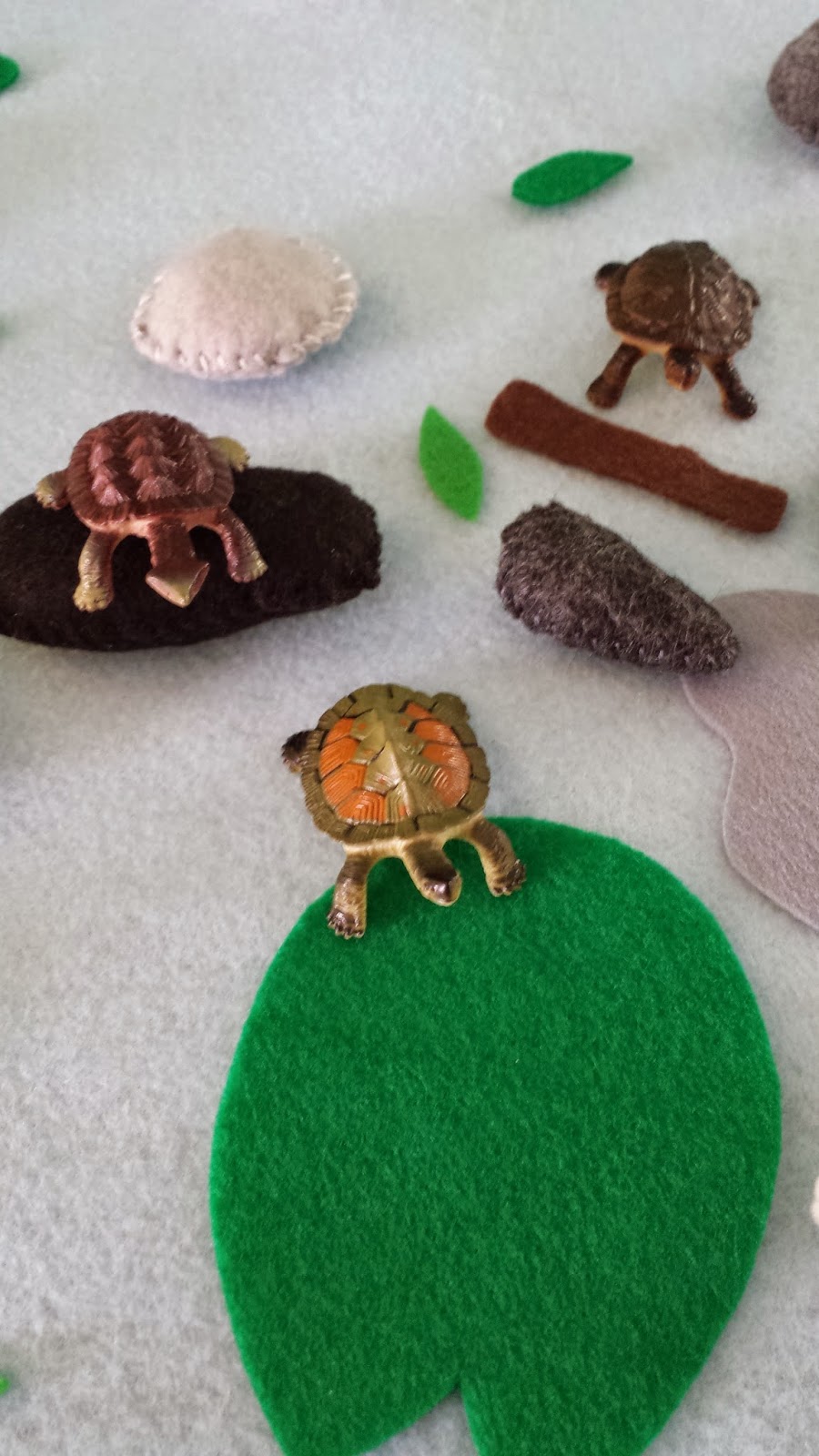 Because this is a river, I added some river friends! They look small compared to the rocks. But hey, maybe they are actually boulders? 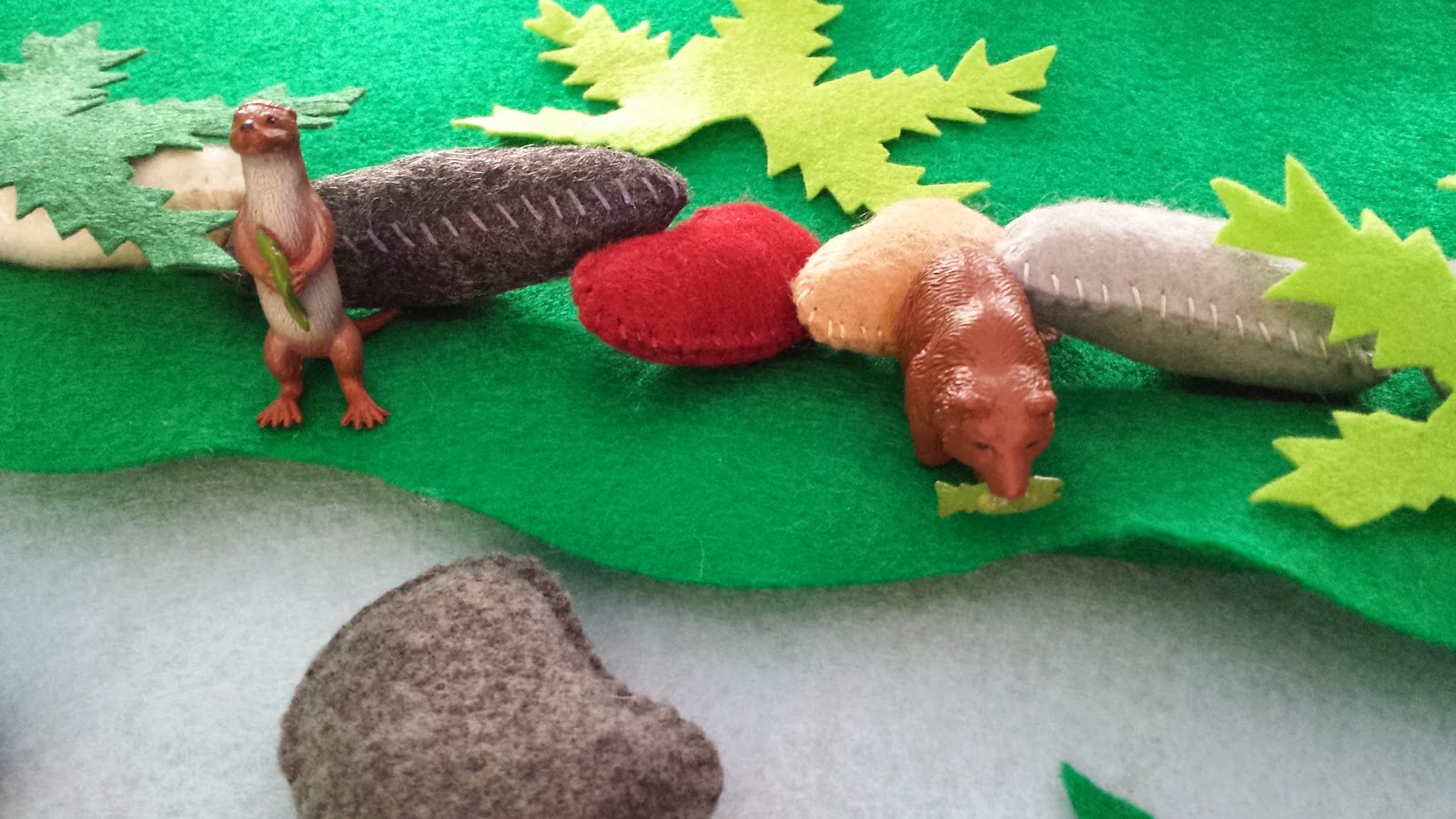 All in all, I love how the rocks came out!! I look forward to making trees and bushes and all sorts of things next!