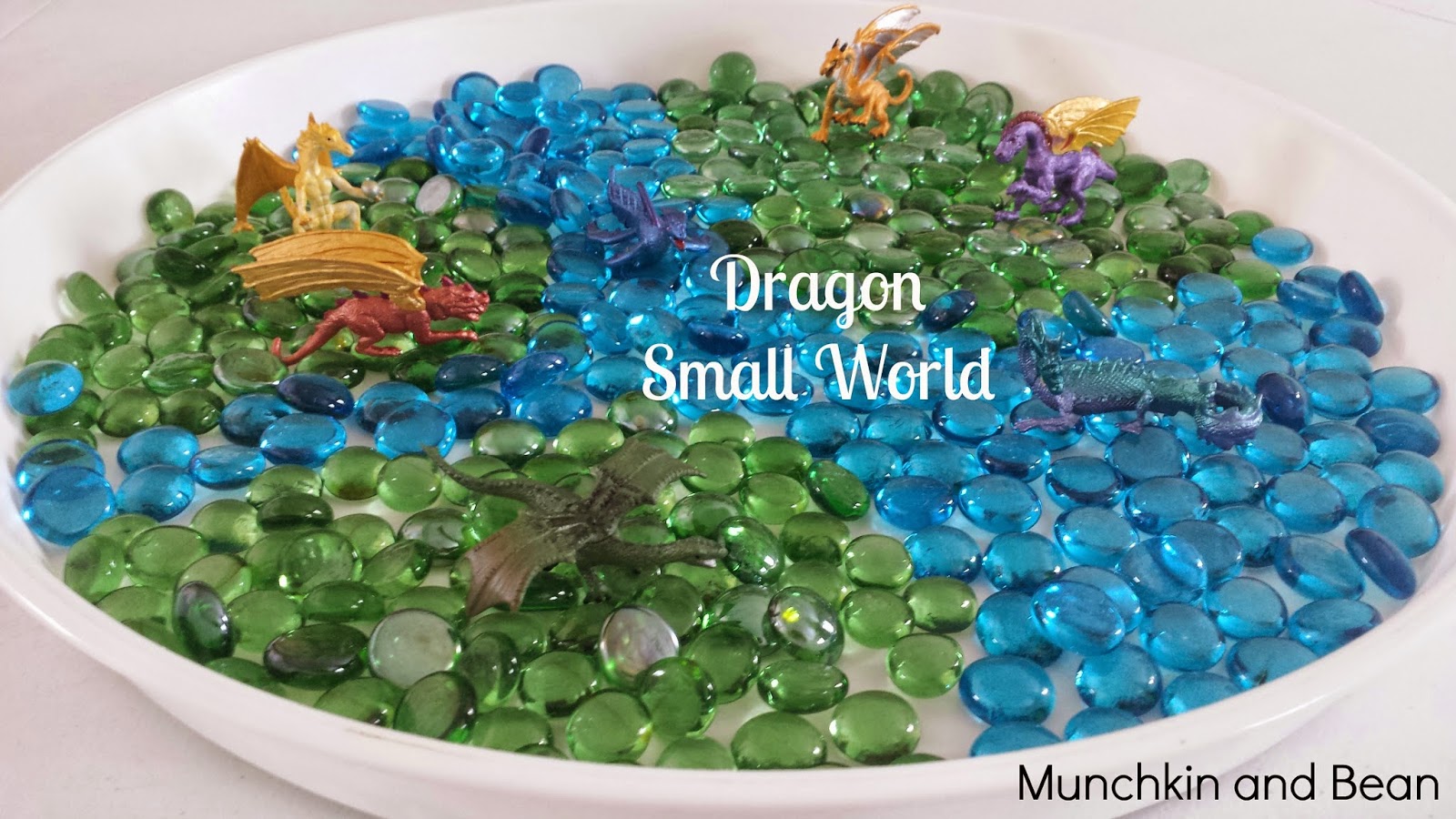 We are participating in Suzy Homeschooler's new series The ABCs of Raising Well-Rounded Geeklings! Be sure to check it out, because there are a ton of awesome posts and activities being shared! Today is Letter D and we are sharing our Dragon Small World!

Since I loved the style of our excavation posts, I decided to write another mini-series of sorts on fantasy themed small worlds. I let Bean choose a sensory bin that we would use for each small world and a handful of supplies, including glass gems, moss, sticks, and toys.

For the Dragon Small World, we used a shallow, round tray, glass gems

in blue, green and gold, and a handful of Safari Ltd dragons (check out the Lair of Dragons Collection 1 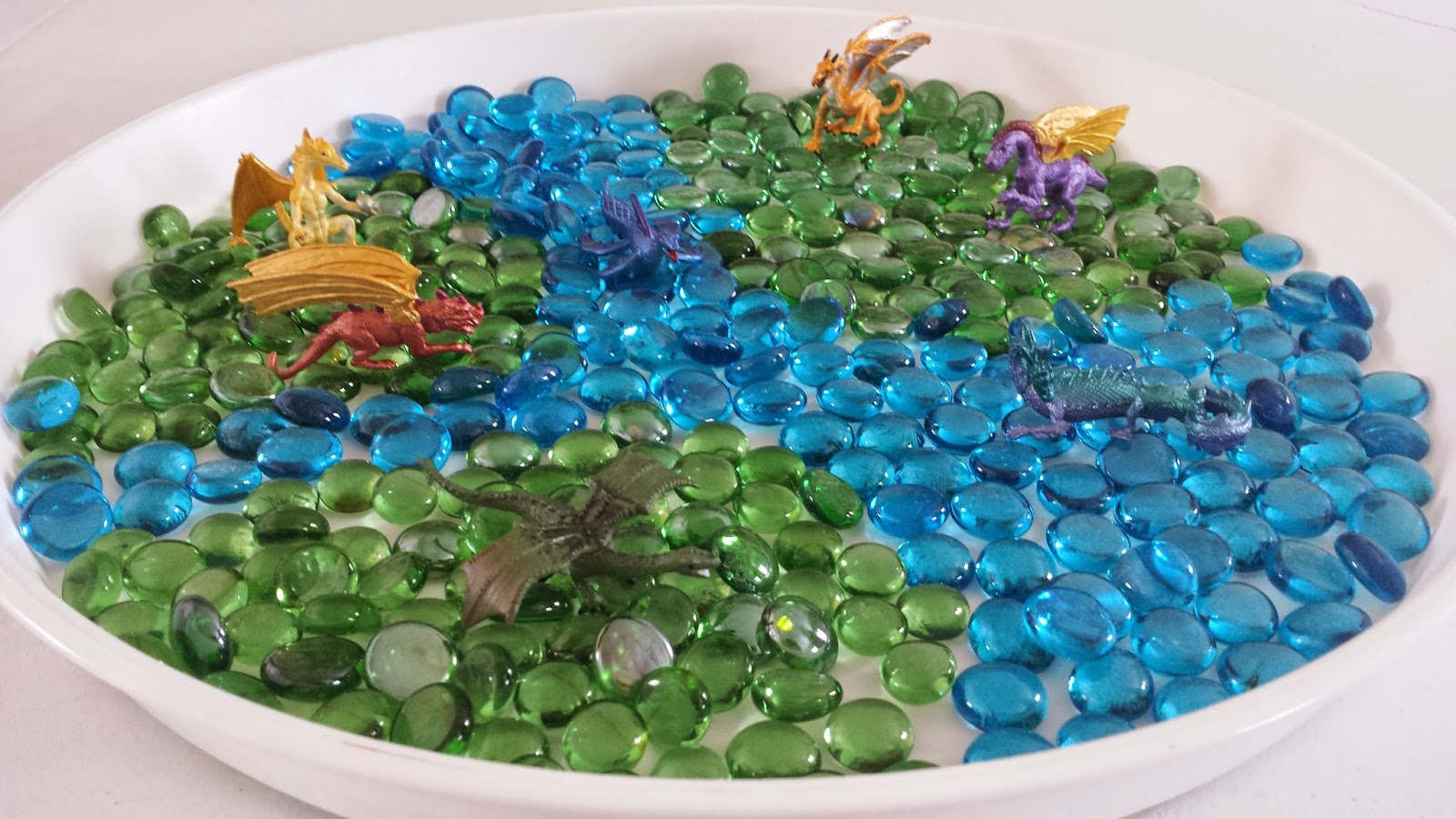 Munchkin and Bean eagerly jumped in and started playing. While they played, I read them stories and tales about dragons from our Usborne books (you can find them at the bottom of this post). After a short rest and snack we returned to the sensory bin and worked on storytelling. I asked them what the dragons were named (they had names like Treelo and Lobo). I asked them what type of dragon they were (river, sea, forest, magic), what they loved doing (flooding rivers, collecting gold and treasure, laying eggs), where they lived, etc. They collaborated on many of the ideas, like agreeing on a name or deciding what the dragon was doing. Once they knew who all the dragons were they began telling stories. 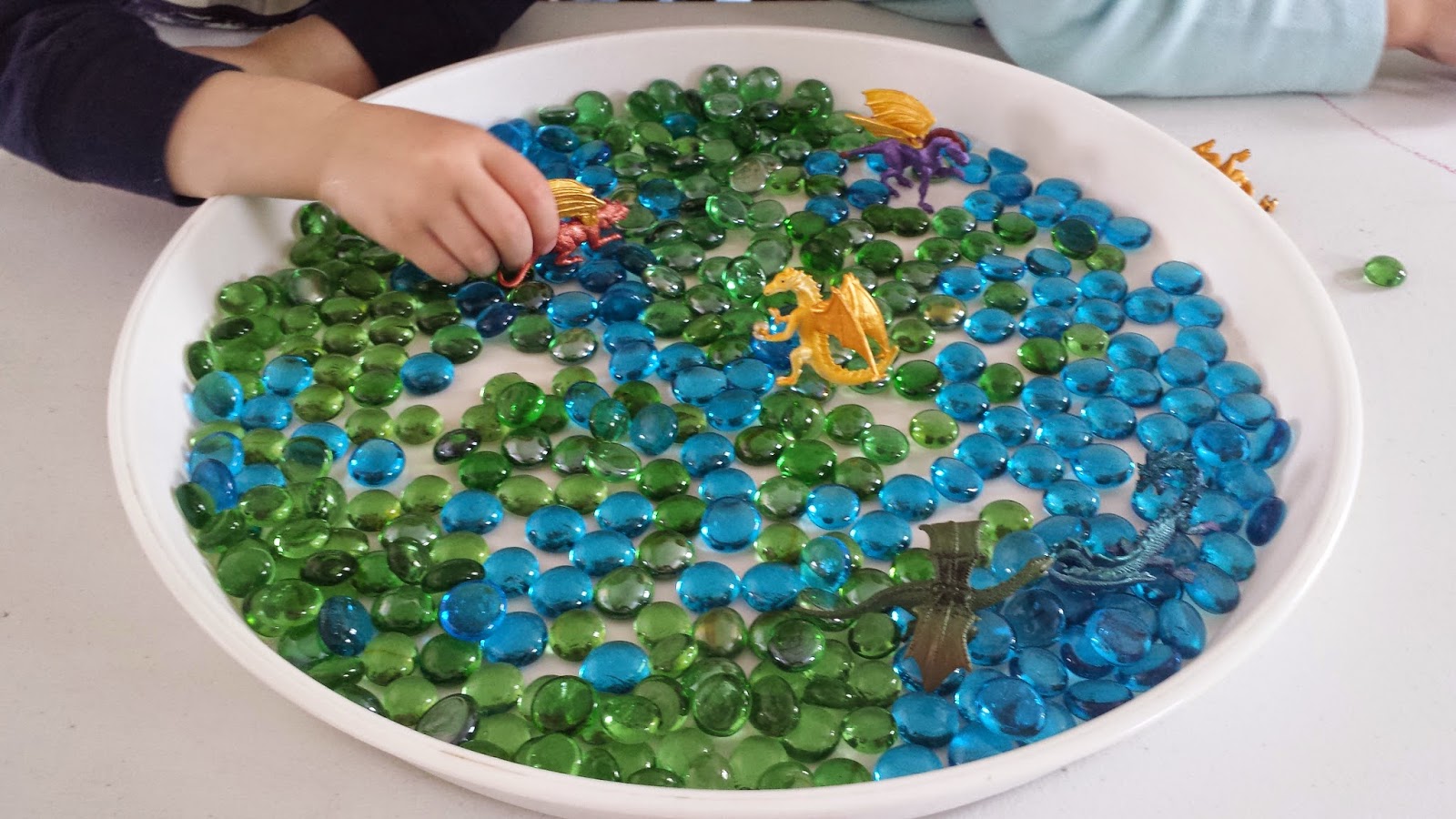 Part of the storytelling process, at least for Bean, meant creating a symbol to represent each of the dragons. Below is the river dragon's symbol, a drop of water. She said the gems in the middle of the symbol was their name in the dragon language. 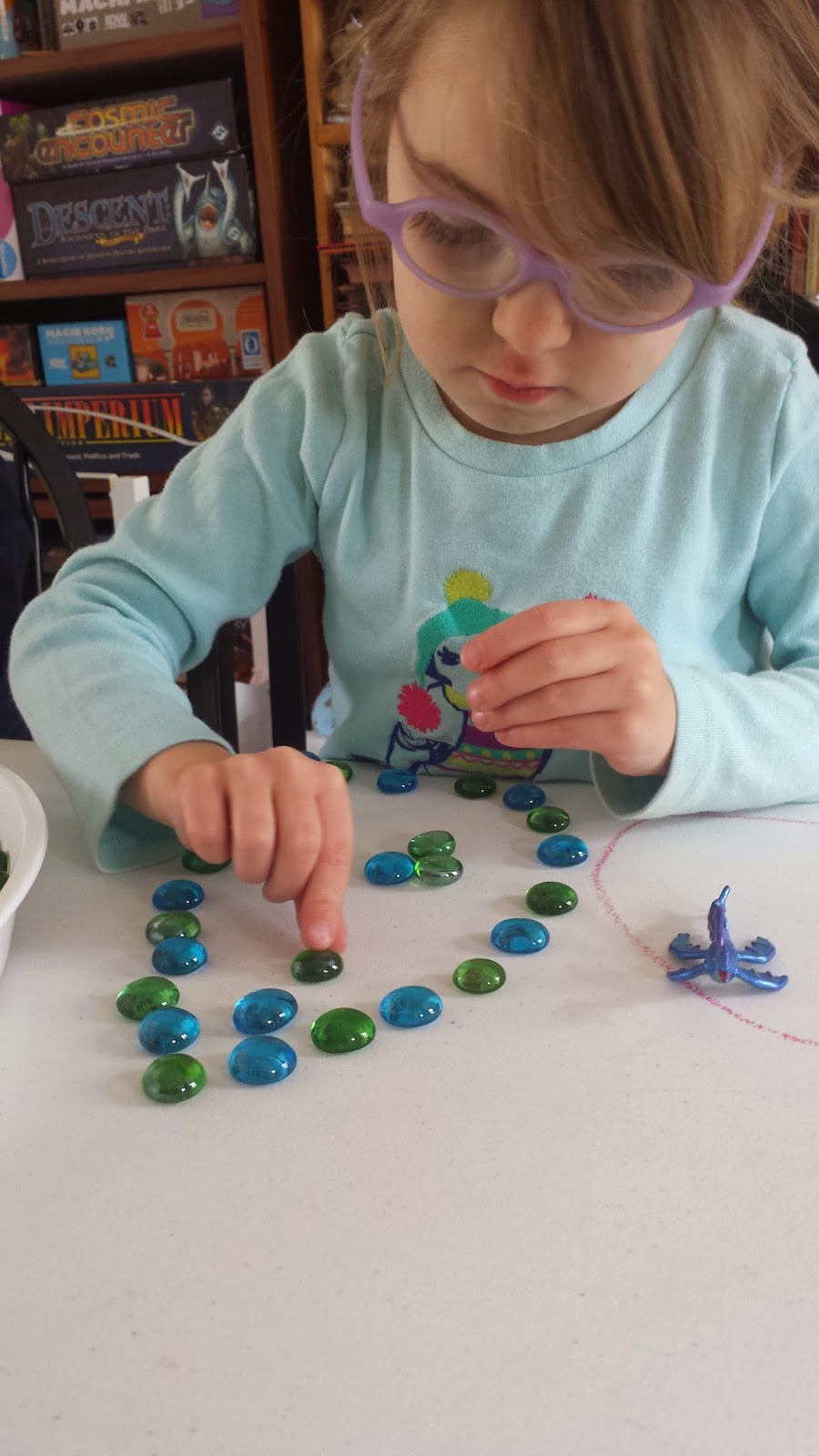 They were adventurous dragons and had collected many bags of gold on their missions. After about a half hour of the story they decided that they needed some glass gems to represent all the gold the dragons were hoarding. At which point I procured a bag of golden glass gems and they poured a bunch into the "heart of the mountain." 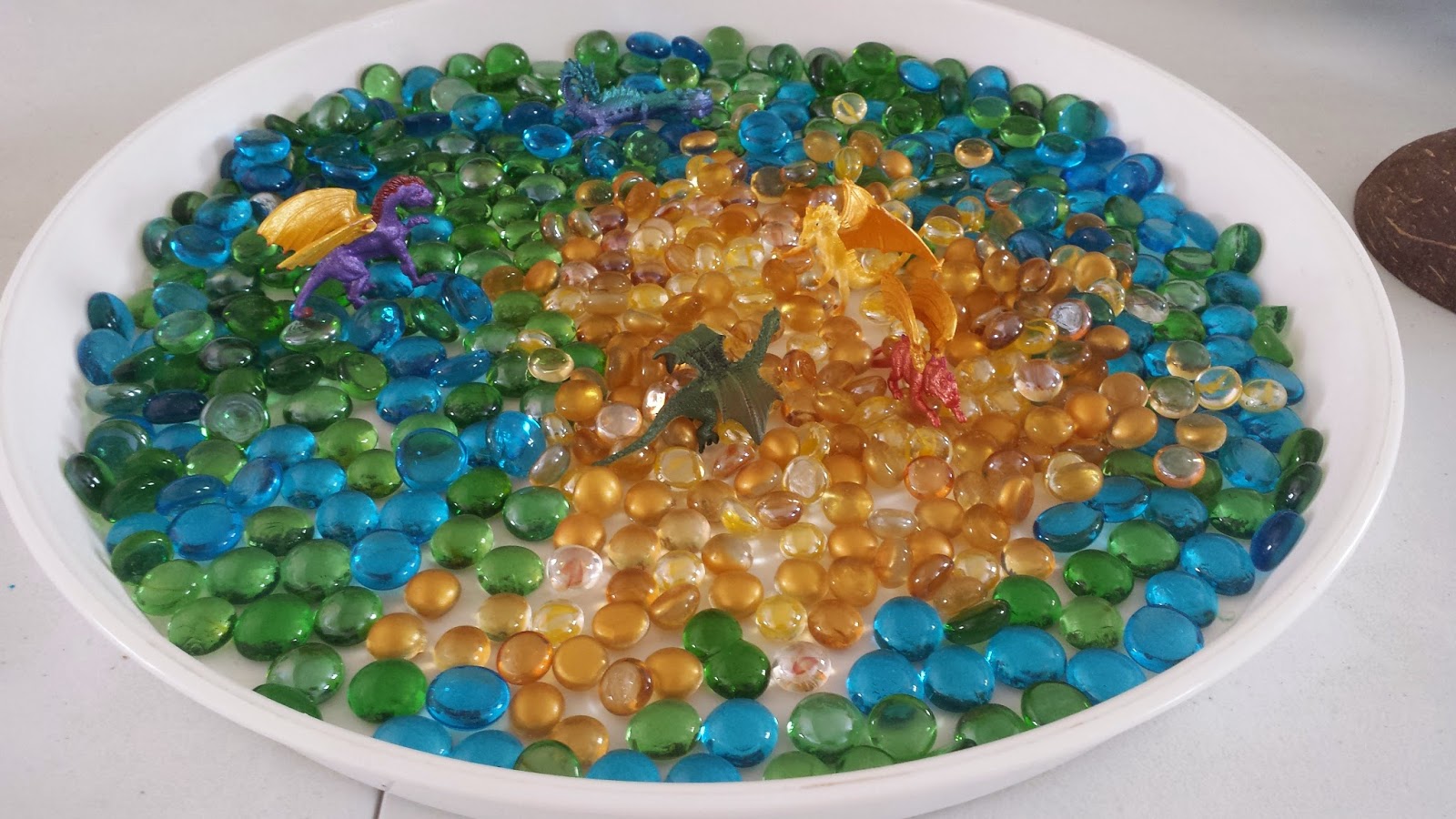 Bean really loves hands-on storytelling activities. She loves that she can play and create the story at the same time. Playing often inspires new parts to the story she is telling, like if some of the blue gems spill over the edge of the sensory bin, then those suddenly become a massive wave that gets incorporated into the scene she is describing. 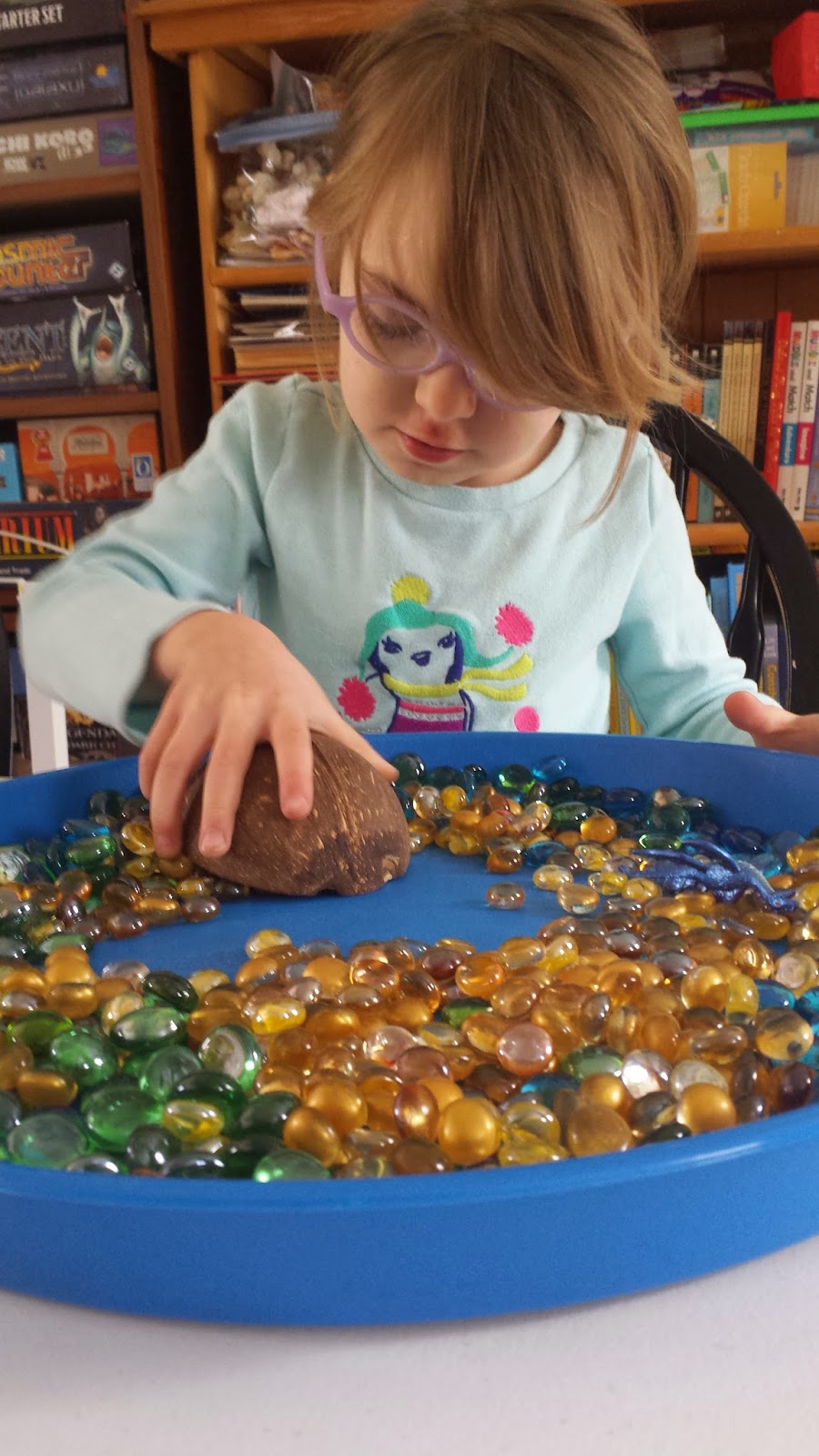 Meanwhile, Munchkin discovered the gem bag! He created his own fine motor activity out of this simple set-up, which I hadn't even intended. But he loved it! He filled it all the way up to the top, commented on how heavy the bag was, and then proceeded to dump it out and start again. :) 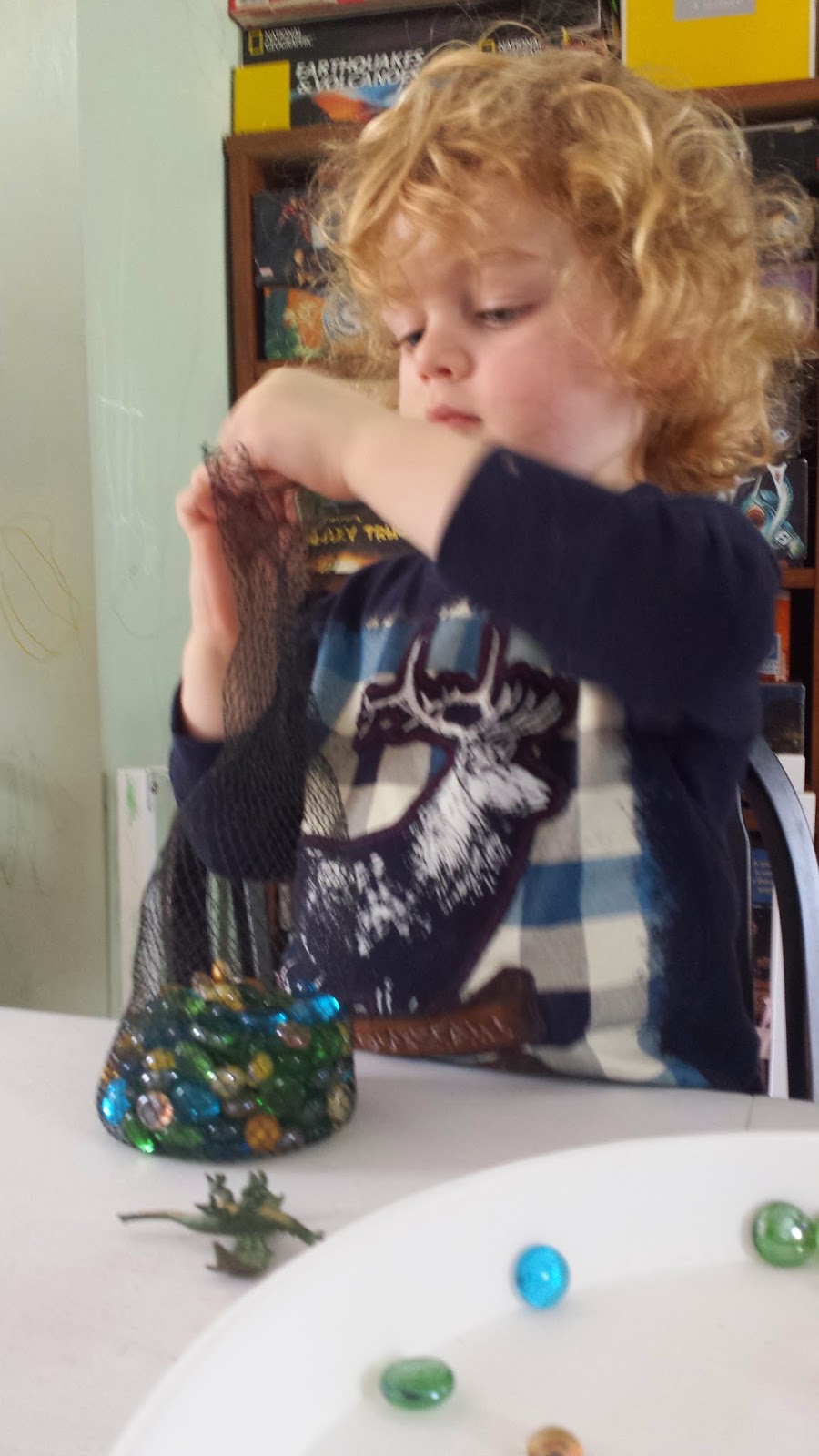 It was a wonderful storytelling experience for all of us. I listened eagerly to the story and helped gather any additional materials they needed (like the coconut that is really a deep, dark cave). And while Munchkin lost interest after a while (Lego's are forever calling his name), Bean remained interested for over an hour! She loved that I listened intently to her story and had a lot of fun answering my questions or coming up with her own questions to ask me (she totally quizzed me about my knowledge on Dragon lore, which meant eventually digging out our Dragonology

book for more detailed answers). She also noted that we had nothing that served as "dragon eggs," so those will be on my future crafts list.

Activities like this are a great way to work on literacy skills, such as vocabulary and language, self-expression, critical thinking skills, problem solving, and communication, among others! 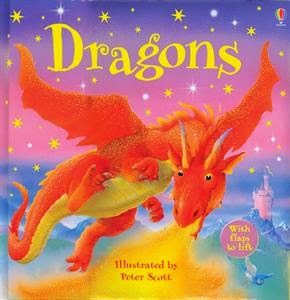 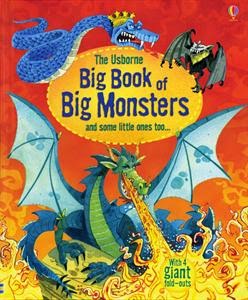 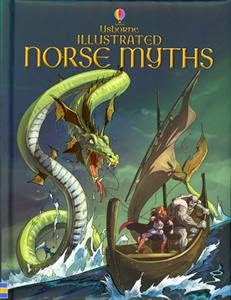