Robot Turtles - Game of the Month

This post is part of the ABC's of Raising Well-Rounded Geeklings series. Be sure to check it out, because there are lots of fun activities, crafts and educational posts being shared by a handful of different bloggers!

Robot Turtles is also our Game of the Month! We love this game and it's one of our Top 5 games that we play on a weekly basis. Robot Turtles is engaging, creative, educational and most of all, fun! We also love that this game is semi-cooperative and allows players to work together if they want. Robot Turtles can also be used in STEM learning activities, since it teaches the fundamentals of programming. 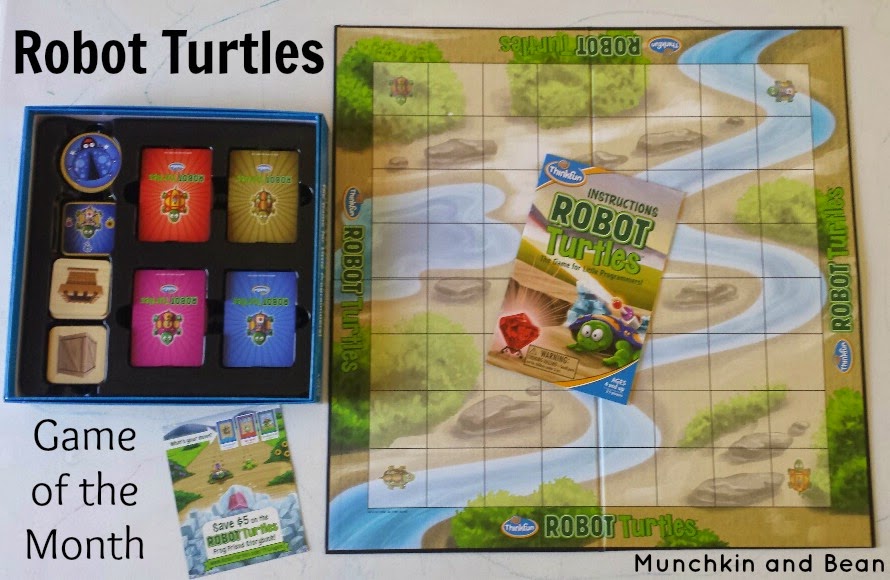 Disclosure: This post may contain affiliate links for your convenience.

Robot Turtles was designed by software entrepreneur Dan Shapiro. He created the game for his (at the time) four-year-old twins on a lazy afternoon. Robot Turtles went on to become the most backed game on Kickstarter! Then ThinkFun picked it up, and now you can find it at Target and Amazon

So what makes Robot Turtles special? It teaches the fundamentals of programming to children as young as 3! Why is programming important for kids? When he designed this game, Dan Shapiro wanted to give his children a wonderful gift, the skill of programming. He wanted to teach them how to program a computer without needing a computer. This is a great skill, especially in our technological age where understanding how coding works at a young age will help them in the future. 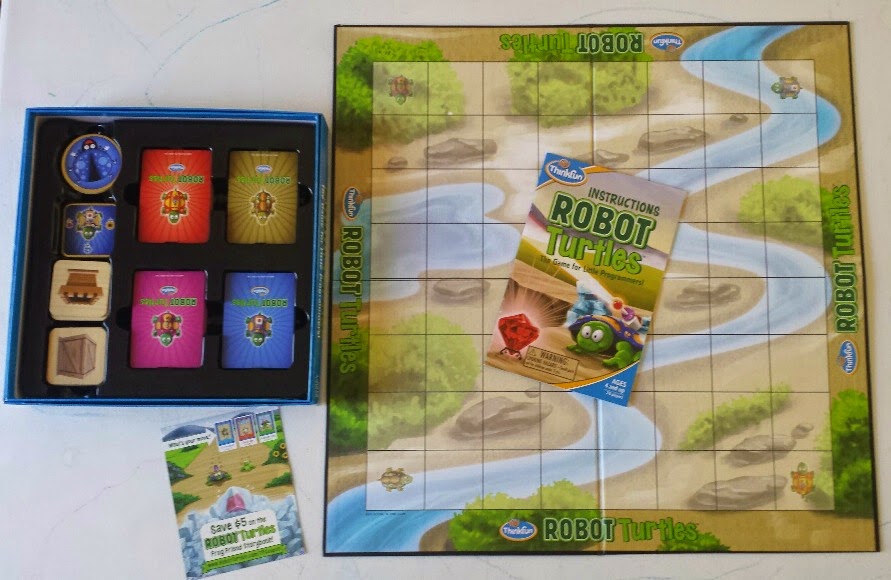 Who is this game for? Children 4+ (or 3, if they are familiar with playing games) and for 2-5 players. Reading is not required either. There are only 4 turtles to play, but an adult can sit in as the 5th player to help the younger kids as a "Turtle Mover." The Turtle Mover represents the "computer" and should take responsibility for moving the player pieces around.

However, for the most part, my children have always been responsible for moving their own player pieces. We explain the turn (choose a card to move the turtle), help them move the turtle or let them move it by themselves, look at the obstacles and work out a plan to overcome them to reach the jewel. This is because Bean is incredibly independent and will not allow someone else take a move for her that she herself can do. 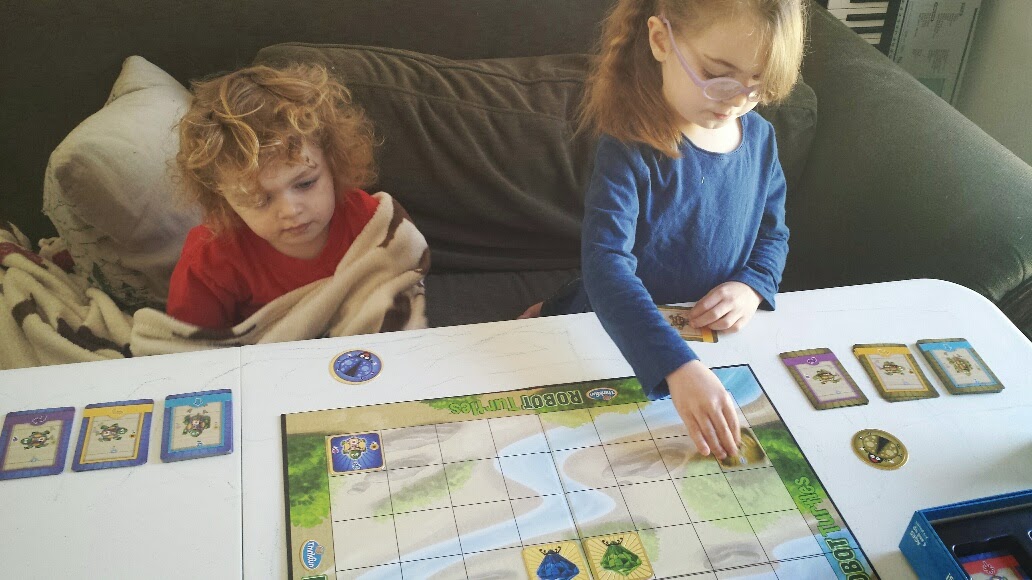 The Turtles come in four colors: blue (Beep), purple (Dot), green (Pangle), and red (Pi). There are four code card decks, color-coded to match their turtle, and the cards have a solid bar of color and a symbol, which tells you what the card does. Blue is Forward, Yellow is Left, Purple is Right, Red is Lasers (or Blasters, as Munchkin calls them), and Green is Function Frog. Each player also has a Bug tile, which they can tap to re-do their last move. 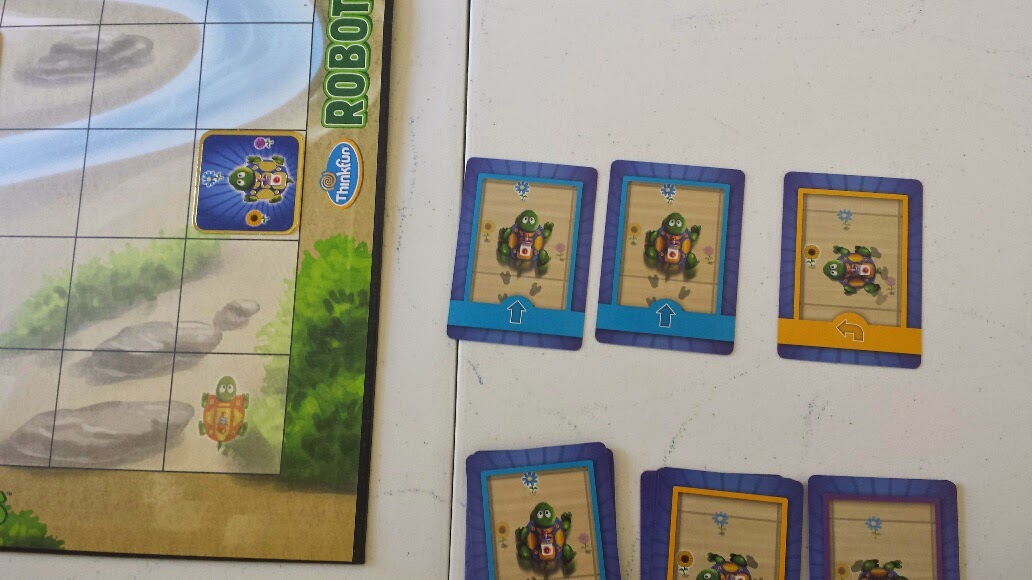 Ignoring that Munchkin started his turn where Pi, the red turtle, is supposed to start, you can see how Munchkin took his first 3 turns. He moved forward twice and then turned left, but stayed in the same square. You only turn the turtle 90 degrees when you play a yellow or purple card. Then you can play a blue card to move them forward.

So how do you use the other tiles? There are stone walls, crates, and ice walls. Each one introduces a different type of obstacle and ways to move through it or around it. You should introduce them in order (ice walls, lasers, stone walls, and then crates) and only one at a time. Play the game a couple times between unlocking the levels, so your child(ren) can get used to the new rules before adding more.

When you first introduce the Ice walls, you are unable to move through them, so do not arrange them in a way that prevents any of the players from reaching the gems. If you run into one, make a turtle sound and wiggle about (the rule book suggests acting silly and making it fun!). 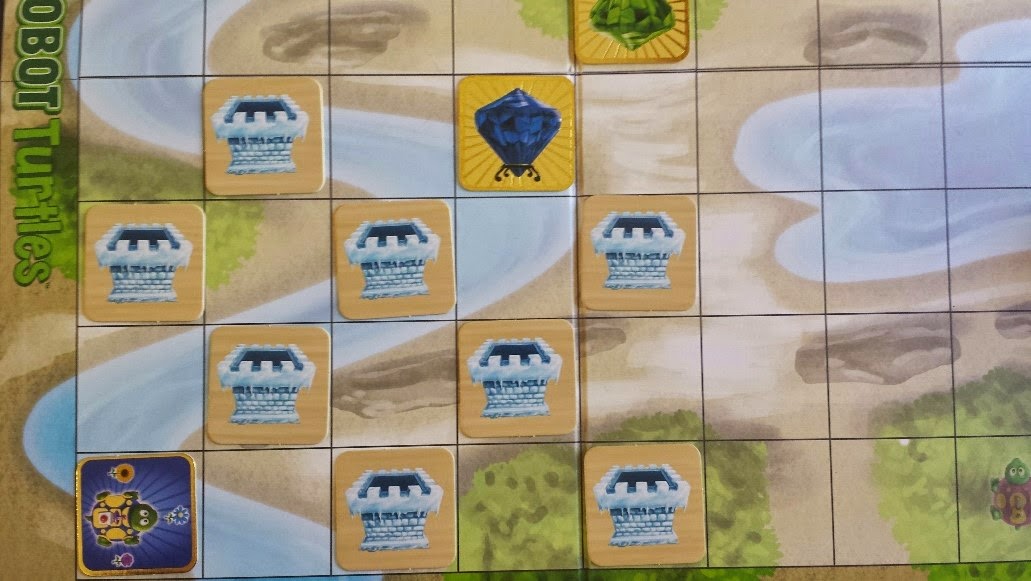 Once you add in lasers, you can blast down the wall, which results in a puddle (flip the tile over). You can now move through that space. 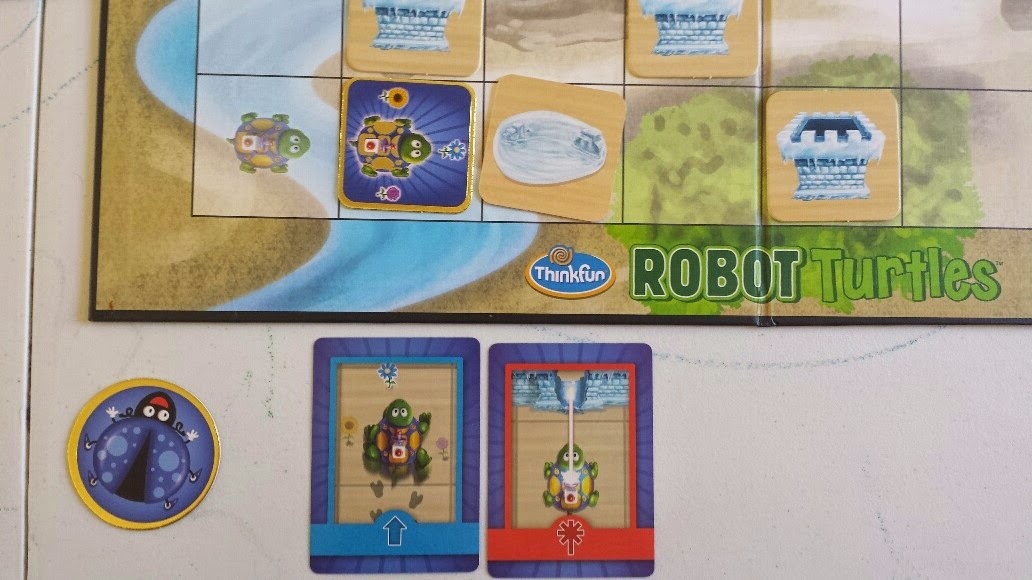 In the pictures below, you can see which cards were used to move and blast the ice wall. 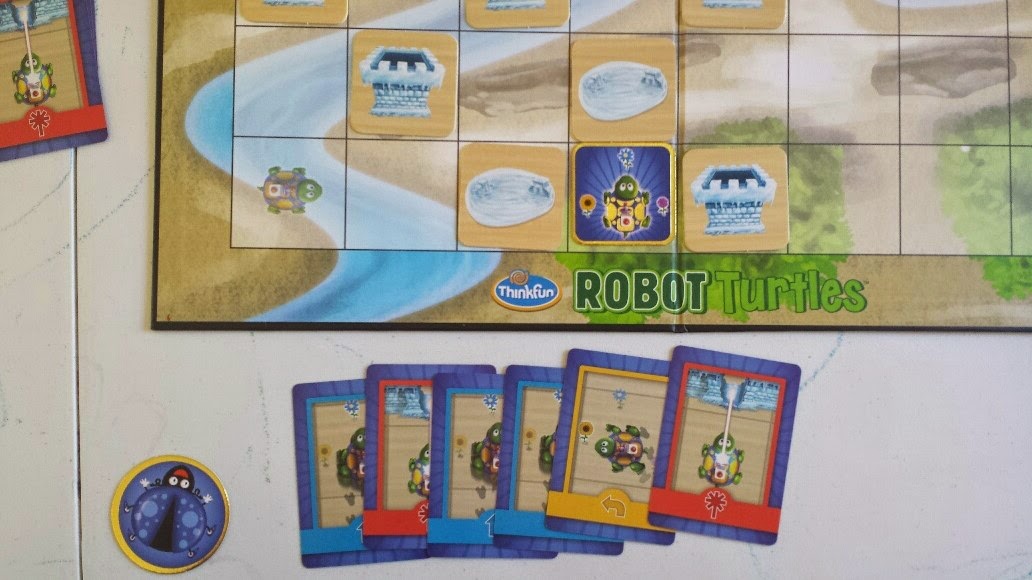 Play until all the turtles reach their gems. We've always played until the turtle reaches the gem, occasionally they will play an extra turn and be on top of the gem. When you reach your gem, remove it from the game and place it in front of your cards. You can either stop playing, or you can help out the other turtles by blasting ice walls or moving crates around. 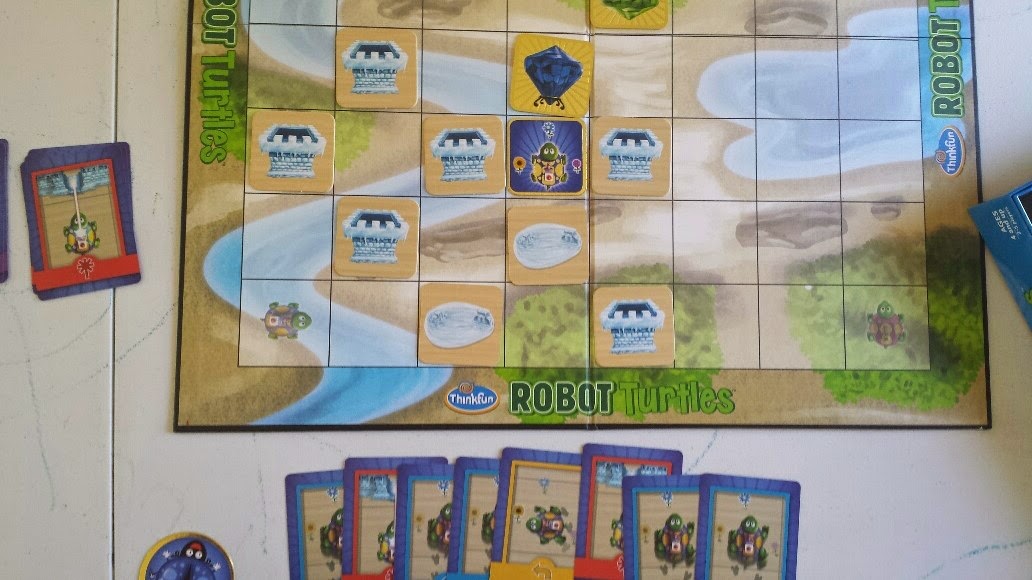 The one obstacle you cannot move or blast is the stone wall. Once it's placed and the game begins, you're not allowed to move it. Be creative with the placement! It's fun to make it difficult. 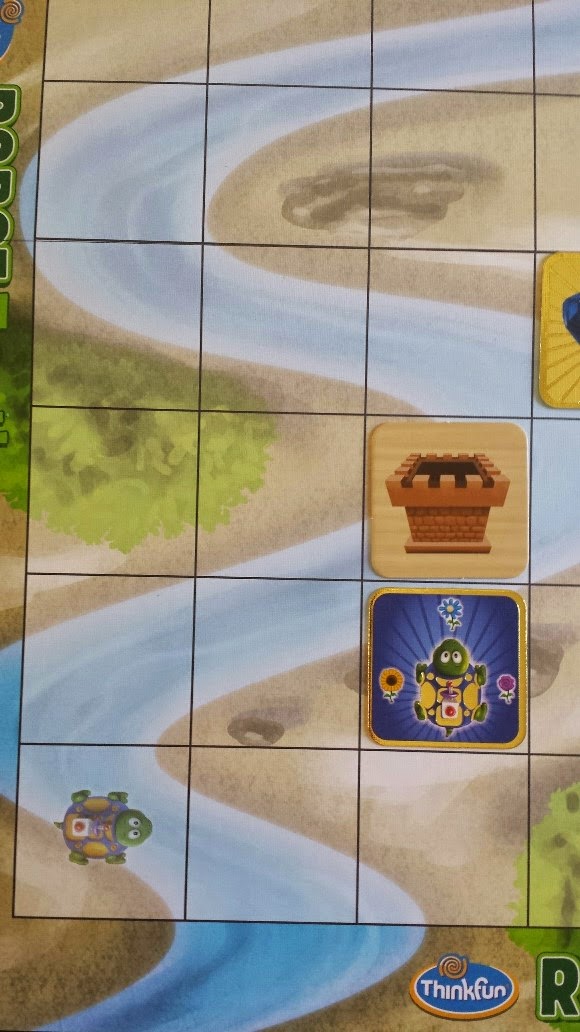 Below you can see how Munchkin moved the crate out of his Turtle's way. 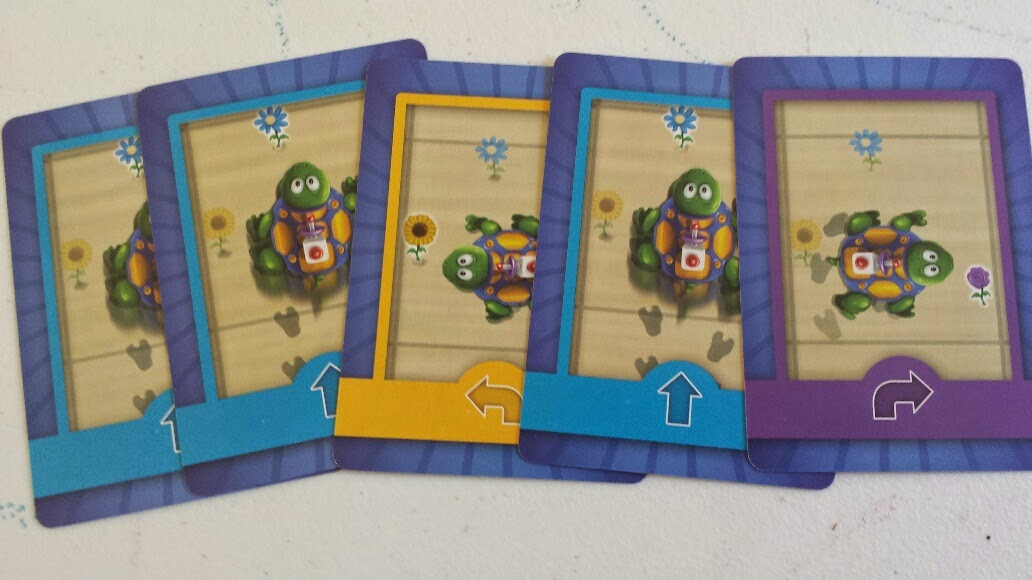 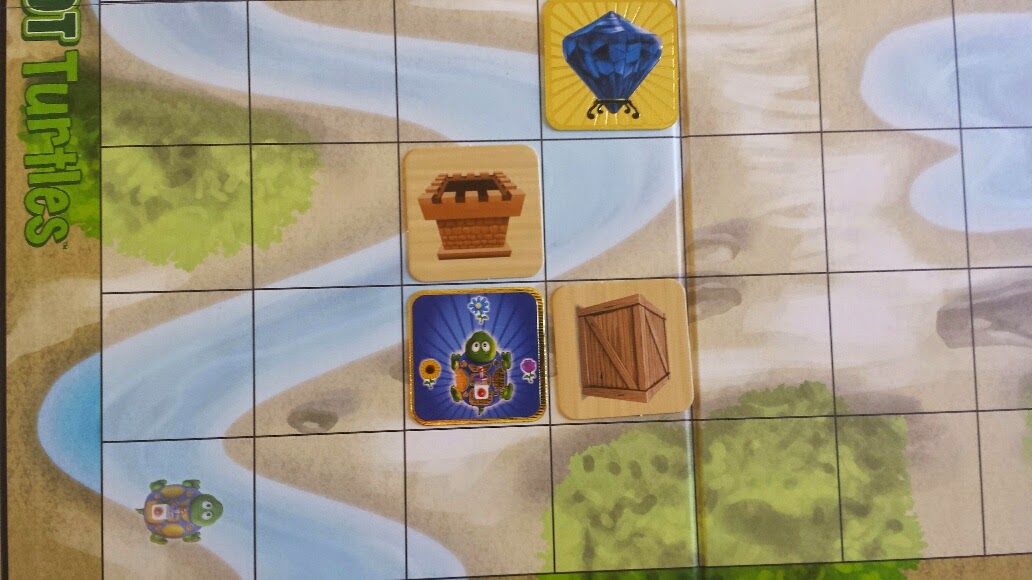 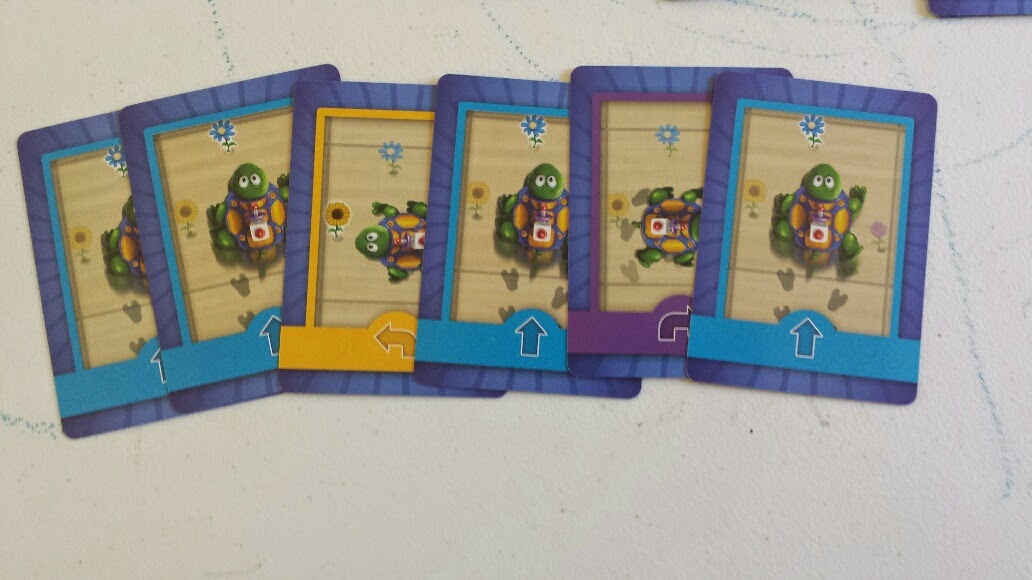 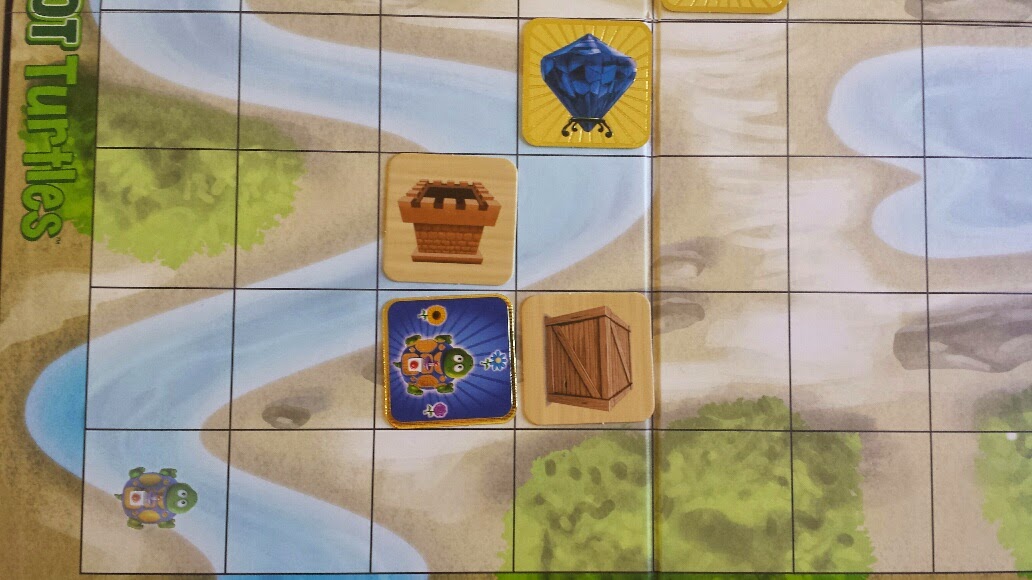 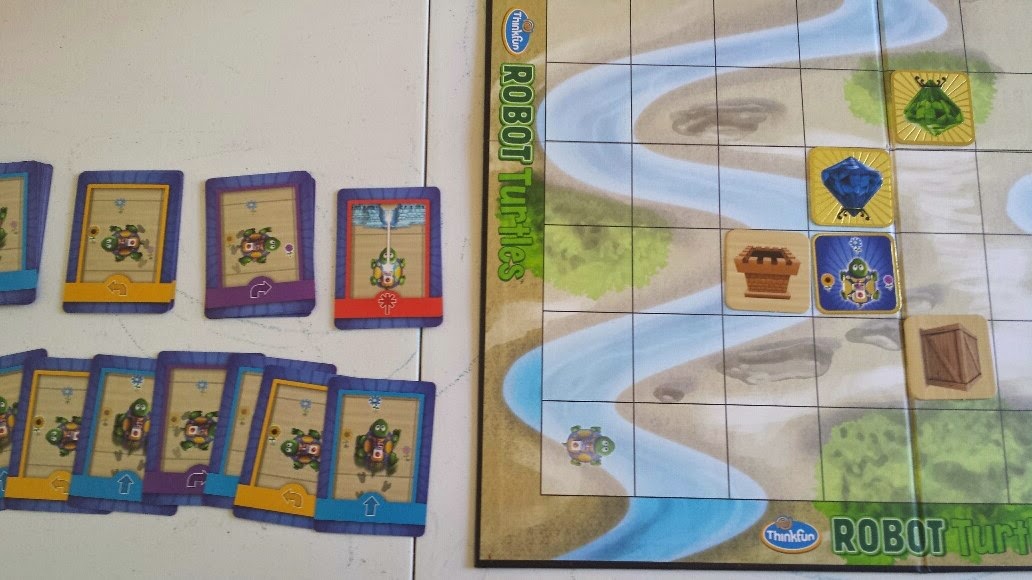 The only card not pictured is the "Function Frog" card, because we haven't unlocked it yet. We try to play the game at least 5 times with each new "unlocked" level before we try to introduce a new one. The Function Frog should be used by experienced players, who are ready for a more difficult game. The Function Frog is used to represent a reoccurring pattern in the code.

There are also extension activities available, like creating an Adventure Quest. There's also a Quest Library of ready-made Adventures created by kids that you can play.

You can also pick up the interactive eBook for 3-8 year old's. You'll play the role of Beep the Robot Turtle and go on a quest to retrieve a precious jewel. It has all the same mechanics of the game and you can even print it out! And there are bonus coloring pages!

There are so many different ways to play this game and that makes it all the more fun! Start out at the most basic level with your children, regardless of age, and work your way up. Let them experience leveling up. Take pride in overcoming the obstacles!

Have you played Robot Turtles? If you're new to this game, what do you like about it? Let us know in the comments!
Posted by Unknown at 5:06 PM

Email ThisBlogThis!Share to TwitterShare to FacebookShare to Pinterest
Labels: Board Game, Game of the Month, games for kids, learning activities, STEM