Tsuro - Game of the Month 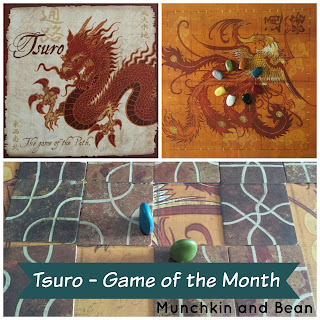 Tsuro: The Game of the Path

is our Game of the Month! It's a great game for families (especially when young children want to join in), perfect to bring to parties, and is a gateway game to introduce new gamers to the Wonderful World of Board Games!

For today's round, I played with my three-year-old son and five-year-old daughter. They have played Tsuro several times and Bean is basically a rockstar. She wins nearly every game. To be fair though, she has a lot more practice on us, because she plays the beta Tsuro app pretty often. 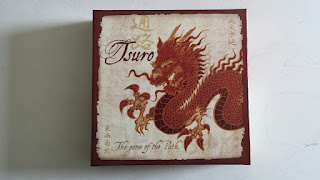 Tsuro's box is beautiful! It comes with a lovely parchment cover with bamboo art. The rule book folds out. The whole display is gorgeous! You can read through the rules relatively quickly (or you can watch a video review from The Board Game Family or a video review from The Dice Tower) and get the game started in about 20 minutes. If you already know the rules, it takes less than 5 minutes to set up the game and get started. 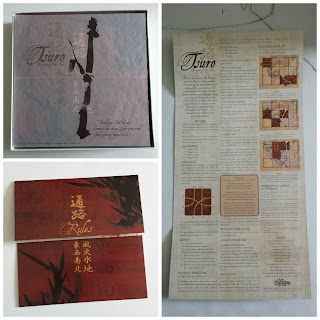 Tsuro is a game about creating paths using tiles. Each player chooses a dragon stone to represent them. Each stone has a dragon symbol carved into it and there are eight colors to choose from. 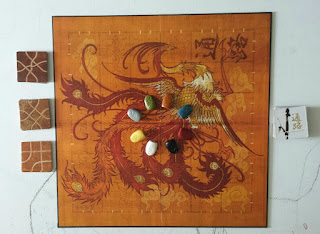 The stack of tiles is shuffled and the dealer (parent or adult) hands each player three tiles. Each tile card has a unique pattern on it. 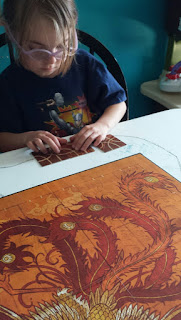 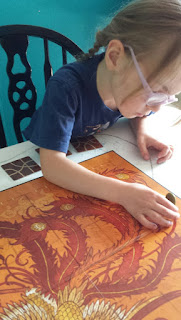 Once you have your tiles, choose a white line on the boarder to start your dragon on their path. (Usually tiles are hidden to the other players, but when I play with the kids, we play face-up.) 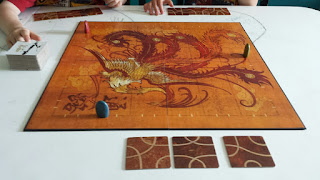 We play by letting Munchkin start, with Bean going next and I go last. It's our routine, which makes it easy for the kids to keep track of whose turn it is and we always sit in the same seats, so the order is the same. We use the dragon tile to mark whose turn it is, just in case they forget.

When you play your tile, it aligns with one of the white lines or a path you already created. Every tile has two paths on each side, so there's no wrong way to play your tiles. However, you always have to play a tile that keeps you on the board, unless you have no other choice, and it either sends you into another player or kicks you off the board. 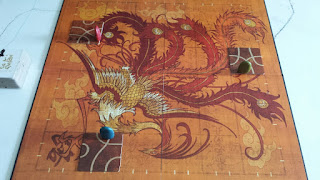 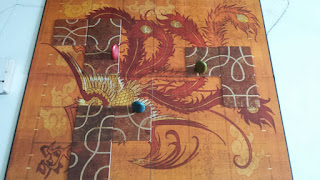 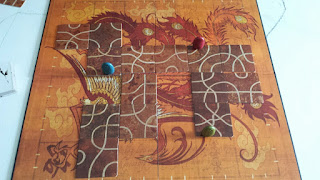 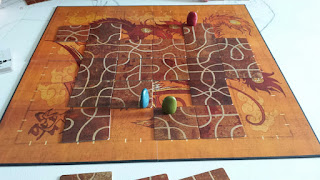 It's a dangerous game when the next tile determines whether you collide, get pushed off the board, or somehow you make it through safely and the game continues. 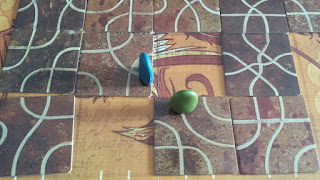 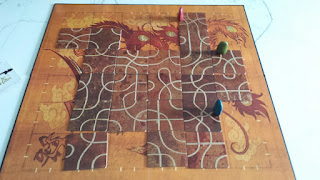 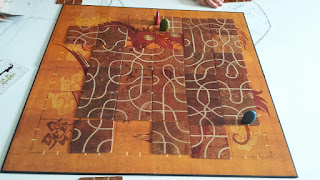 I was the first to fall off the board. That happens when you run out of available tiles to keep you on the board. 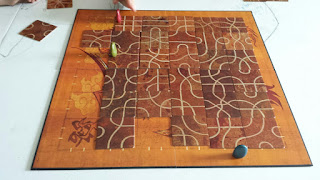 Munchkin was next to fall off. 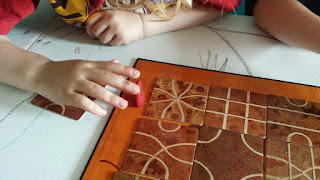 And technically that meant Bean won, but since this isn't the app that automatically finishes, she continued playing tiles until she fell off the board too. :) 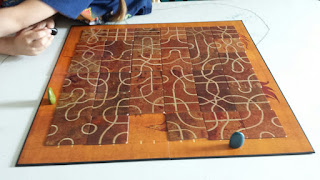 There are enough tiles to fill the entire board, save for one space reserved for the dragon tile. 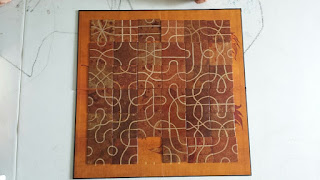 Tsuro is wonderful and an awesome family game. Kids as young as three can play, with parents or older siblings to help, until they get the hang of it. 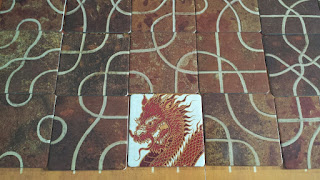 Tsuro isn't just a game about the luck of the tiles you draw. It's a game about strategy. And you can even play competitively and try to knock other dragons off the board or just avoid them and take the scenic route.

Tsuro is great for kids and as a gateway game, but if you want to challenge yourself and play a little bit more aggressively, and want to play with dragons that could eat you at any moment, then I would absolutely check out Tsuro of the Seas

, and the expansion, Veterans of The Seas

You can find Tsuro on Amazon

Disclosure: This post contains affiliate links for your convenience.
Posted by Unknown at 11:34 PM