Our newest homemade pretend food has been a huge hit with the kids! We love stir-fry and teriyaki chicken, so Chinese food was a must-have on our list. Desserts will come next! To see our other homemade pretend foods, check out our Pasta, Pizza and Salad, and Tacos! Yum! 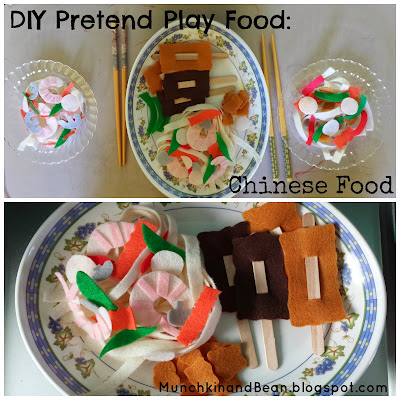 Fair warning, if you have kids who get really into their pretend play activities, you may want to warn them not to actually eat the felt food! It took a few times to convince Munchkin it wasn't actually food, and he got the point finally after enough times licking felt. :)

As I said in the other pretend play food posts, I don't use templates for this project. I simply draw out what I want to make and then use that as a guideline. Occasionally I'll cut them out if it's necessary, but for the most part I have been eyeballing it. You'll notice that I didn't get around to making broccoli, baby corn, bok choy, pineapples or wontons. And that's because my two were too impatient and wanted to play with their new felt foods right away. I'll get around to finishing them up eventually. :) (Oh, and yeah, the broccoli looks completely wonky. I will not be using them as my guideline, haha.) 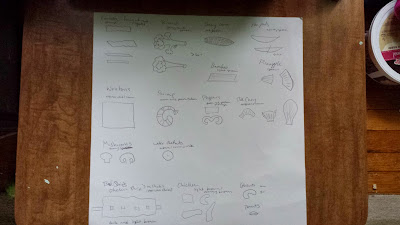 Alright, first up we have teriyaki chicken and beef on sticks. These were super easy to make and are Bean's favourite. They secretly promote fine motor play, which is always a plus! I used some brown scrap felt for this and cut out rough rectangles. They don't need to be perfect because they are meant to resemble a piece of meat and no two pieces of meat are the same anyways. 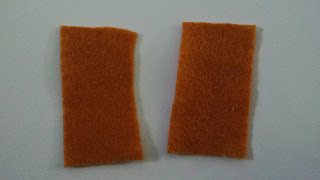 Trim around the edges in a wavy pattern. 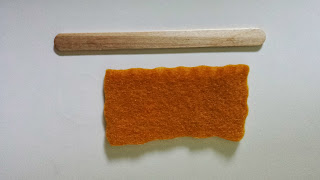 Then fold the felt in half the long way and cut two straight cuts into it about a quarter of the way from the top and bottom. Don't make these cuts too wide, you only want it to be big enough to fit a popsicle stick through. (I didn't want to use actual bamboo skewers because they typically have sharp ends and popsicle sticks are safe for toddlers and preschoolers, but still watch them closely!) 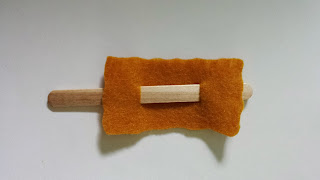 If you are concerned about the wood snapping or possible splinters, you can always opt to use foam popsicle sticks. I've only ever seen them sold in craft kits though. However, they work just the same, they are just slightly thicker and tougher to stick in the meat because they bend a bit. 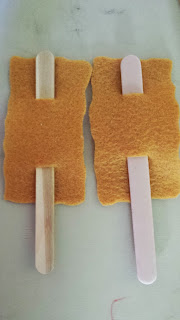 Repeat the process with a darker shade of brown felt for the beef. 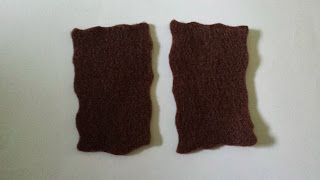 Then comes the shrimp! I'm actually allergic to shellfish, so I wouldn't normally want to deal with shrimp. But they happen to be really cute, so I couldn't resist. I simply cut out a shrimp body out of antique coloured felt and then some shell lines using light pink felt. I made them all different sizes. 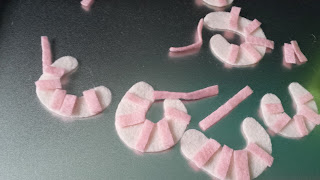 Originally I intended to sew the pink lines on, but then this wouldn't be a "no sew" project! Apparently people like simpler crafts. :) I still wanted to keep the pink lines in place though, so I opted to glue them instead. Sadly I ran out of felt glue! But it turns out that hot glue works perfectly fine as a replacement glue. 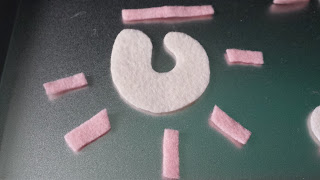 You'll want to trim any of the excess pink hanging off. 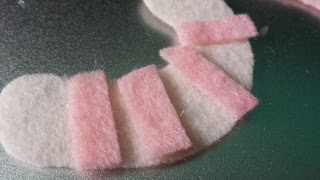 And I decided to use a metal tray as my base of operations because I knew at one point I'd get glue everywhere (why does that always happen to me??). Hot glue peels right off of metal though, so it was perfect for the job! 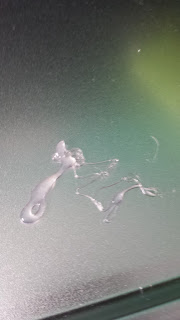 I asked Bean if she wanted me to add an eye to the shrimp (I'd have used super mini pom poms, like the ones we use for spices in the pretend pasta), but she said that would look creepy! 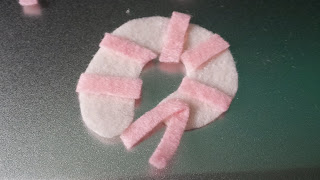 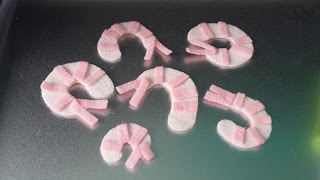 For the rest of the ingredients, there are shredded carrots and fancy-cut carrots, two kinds of mushrooms, green and red peppers, pea pods, water chestnuts and chicken (can be General Gao's chicken or teriyaki chicken). For the noodles, we used the thick cut noodles from our pretend play pasta and called it "lo mein". 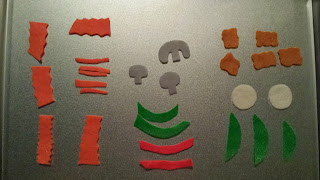 And here's what they look like all put together in a fancy bowl! Doesn't it look delicious? And we had enough to make another two bowls worth! In Bean's own words, "Yum, Yum, Yum!" One is shrimp and the other is chicken. 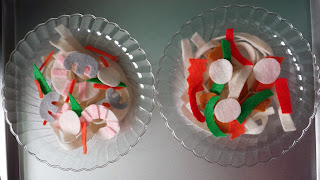 I set them up at the picnic table for a quick pretend meal while I prepared their real lunch (cheese and crackers and veggie sticks) at the table next to them. I even gave them some chopsticks to use. For some reason I can't find the kid-friendly ones that are easier to use, but they happen to actually really love these ones so it worked out perfectly. :) 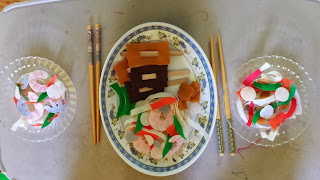 They played with this set up for quite a while! They even pushed their lunch aside until they were done playing. :) 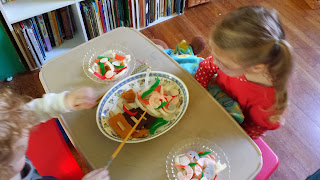 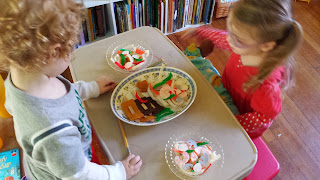 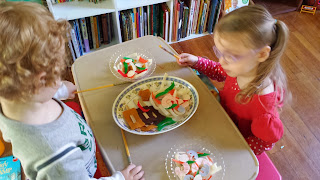 I showed Bean how to use the chopsticks, but she preferred to use them her own way. She would wrap a strand of lo mein around one of the chopsticks and then pretend to eat it. 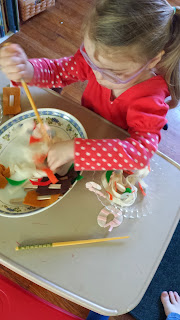 Here's what the lo mein looks like being picked up with chopsticks. Bean literally told me it looked good enough to eat. :) 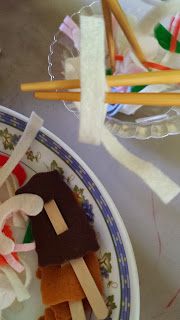 She absolutely loved this batch of pretend food! She returned to this activity again after lunch and continued to wrap the lo mein noodles around the chopsticks. 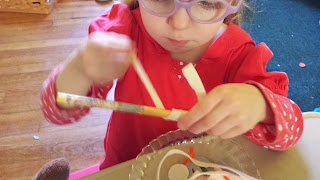 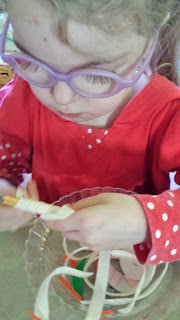 After she was done, she asked if she could have a container to save the rest of her meal in her fridge. It was so cute watching her pack up her leftovers and store them away in her little play fridge.

Please always stay within arms reach of your child(ren) when they are playing. Some sensory materials may not be age suitable for every child. Please use your own judgement when creating sensory activities for your child(ren).