This is by far Bean's favourite sensory bin. We used a large shallow container (approximately 12 quarts) and filled it about 1/3 full with play sand. Then we added river stones and rocks that she had collected outside along with a few sea shells (she uses them as bowls for the dinosaurs and fills them with dried beans and water). Our dinosaurs came from the Animal Planet Big Tub of Dinosaurs play set which comes with volcanoes,  trees and grey rocks. We don't usually use the rocks unless we are not playing in this bin, but she likes to add the trees and the volcanoes.
Bean's favourite dinosaurs are the ones that have open mouths so she can pretend that they are eating her fingers. She will laugh and tell me they are eating her fingers and assist Munchkin so he has a dinosaur eating his finger too. She knows which dinosaurs eat plants and which eat other dinosaurs. The special cases are obviously the dinosaurs that have a taste for children's fingers, but they also like beans, so she will fill them up with as many beans fit in them. 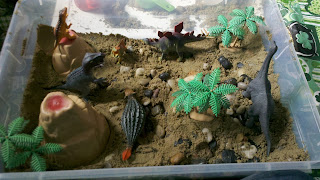 I will leave out scoops, bowls (sometimes with water, so she can watch how the water soaks into the sand), small strainers, shovels and other tools that she can use to move the sand and rocks around. She likes to pile all the large stones in one corner of the bin, the smaller stones in the middle around the trees and the volcanoes on the other end.
Normally the "mean" carnivores live in the volcano region where they can watch the herbivores eat the trees and the bean/finger eating dinosaurs live up on the rocks. Sometimes she will reverse the roles or just completely mix them together. Although she has never added all the dinosaurs to the bin at once, she normally adds them one at a time and feeds them individually. The triceratops that was beat up by our dog normally gets picked on by the carnies and eaten :(