I found this fun recipe at Play Create Explore. Immediately I knew exactly what I wanted to do with it ~ Finally use the Duncan Hines Frosting Creation mixes that have been sitting in our spice cabinet waiting for a worthy project!
The recipe calls for 3/4 cup conditioner (I would suggest using a cheap conditioner that does not have a strong scent, because the perfumes will easily have an overpowering smell and you want to be able to smell the scents that you add) for every 1 1/2 cups of corn starch that you add. We used a little extra conditioner to finish off the bottle but it did not effect the recipe. Thoroughly mix together until there is no corn starch powder left over, you want it to be similar to play dough. We only made one batch using the above measurements and were able to separate the dough into five equal portions. From there I poured some of the Frosting Creation packets into bowls to mix into the balls. We used Chocolate Mint (green), Strawberry Shortcake (pink), Chocolate Almond (brown), Cotton Candy (blue) and Orange Creme (orange). We also bought Cinnamon Roll, White Chocolate Raspberry and Mocha but we are saving those for another recipe. 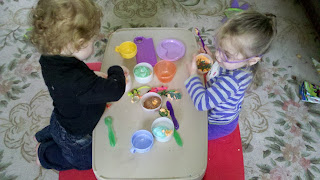 Bean and Munchkin LOVED playing with the "ice cream" dough. 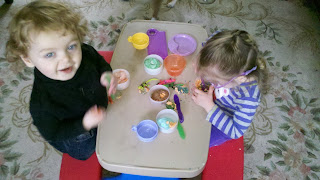 They loved the texture, colour and scents. Munchkin did try a lick, but luckily decided he did not like the taste :) It took him a few minutes to realize that the "ice cream" wasn't melting, which is the part he hates most about ice cream and the reason why he will not eat it (he's prefers yogurt). I gave him some of the play dough tools to use with the "ice cream" and he enjoyed cutting the dough into cubes and squishing them with the bowls until they looked like macaroons. 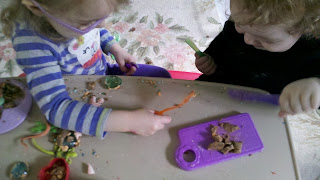 Bean loved the coloured rice sprinkles I gave her to use. 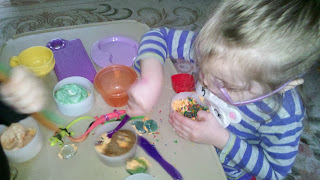 We do not have plastic ice cream cones so instead we used her plastic tea cups. She would fill them with the "ice cream" scoops and sprinkle the rice over them and then use a spoon to scoop them back out or squish in another flavour. 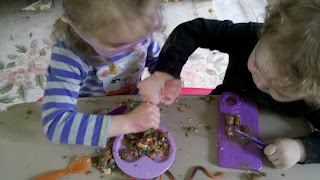 However, I'll be honest, my kids normally start out a project being nice and neat and after a while of them playing with it they decide to get really into it.. normally meaning it gets all over their clothes, face/hair, the carpet, etc. I don't mind so long as they are having fun and they are well behaved so they don't purposely destroy things. I also forgot to put down the tablecloth under the picnic table before starting the project, but luckily most of the dough remained on the table and it was easy to vacuum and clean up after. But if you use food colouring or something that might stain, just be mindful of it :) 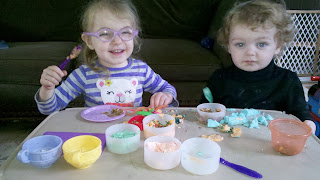 After they were finished (they played with the "ice cream" dough for a solid hour), we put the remaining dough in an airtight container to save for later. I don't know how long it will last yet, but I hope to get another few uses out of it.
This was a very simple project and since I had all the ingredients on hand I did not have to buy anything. But if you needed to buy the ingredients, this project would cost under $5.00. Cheap conditioner will cost about $.99, corn starch was about $1.50 if I recall correctly and the Frosting Creation packets were 4/1.00, depending on how many you decide to buy.