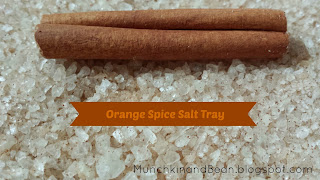 It's nearly autumn and everyone is thinking about apples and pumpkins and I am feeling like the odd duck out who is looking forward to mugs of warm spiced orange juice to start my days. I am not even particularly a fan of orange juice, but when you add in some delicious spices, suddenly it's a different drink. So while I was setting up a salt tray for the kids to do a few letter and number tracing activities...

I was suddenly inspired to create an orange spice salt tray! We love salt trays. We have made several different types, using different colours and scents and themes. But this particular salt tray tops the cake! It smells amazing (and makes the whole room it's in smell amazing!) and Bean tells me she wishes she could drink it (it is, of course, not drinkable). Hence why, while they were doing their tracing activities, they were also enjoying a mug of warm spiced orange juice.

To keep with the theme, they used cinnamon sticks as their tracing utensils (they normally like to use thick-bristled paint brushes). 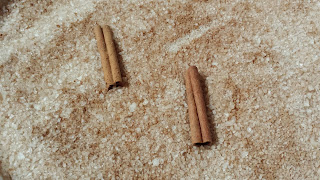 To make this salt tray, all you need is a container of salt, orange essential oil and a few spices (nutmeg, cinnamon, ginger, allspice). We typically use plain table salt, but this time we decided to use 22oz of coarse sea salt. A few drops of orange essential oil goes a long way, so don't add too much. I had the misfortune of having a loose cap on my bottle and a little too much was added... I used a paper towel to remove some of it and spread it out to dry before adding the spices. 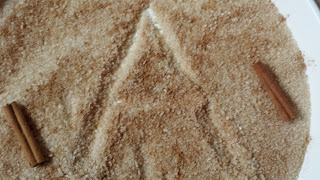 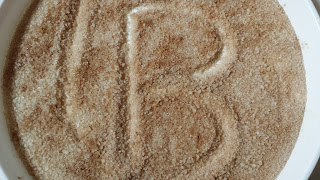 They were also given plenty of time to create their own patterns and art. 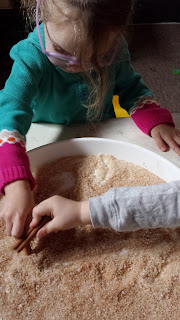 Bean is making a black olive. :) 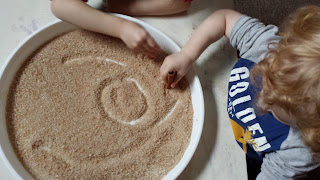 Bean is practicing tracing the letter D. She is very particular about tracing perfectly... and then Munchkin is swirling the cinnamon stick in the salt and messing up her feng shui. So I poured out some of the salt into a smaller tray so he could do his own thing, which was to create more and more swirly patterns. 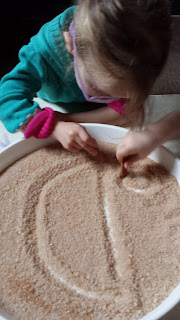 Bean's very fancy E. She traced the E and then added a "tail." Because E is for Elephant. She associates letters to words. So whenever we are looking at a letter, she will ask, "What is E for?" And I will respond, "E is for..." Elephant. Egg. Excavation. Eagle. Earth. Etc. 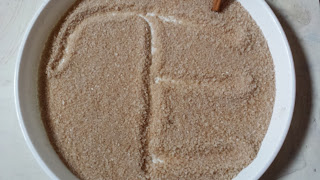 We love the texture of coarse salt! It definitely adds a unique element to this salt tray. 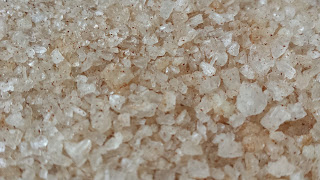 Please note that my children know they are not supposed to put salt in their mouths, especially when they have essential oils mixed into them. They should not be ingested and you should keep an eye on children at all times to prevent any accidents. If your child is still putting things in their mouths, I would suggest saving this activity for when they are a bit older.