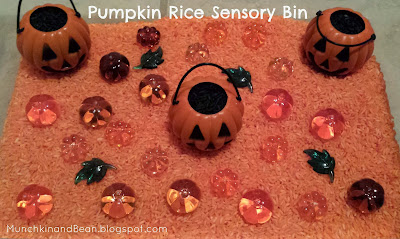 It's nearly pumpkin season and we can't wait to go pumpkin picking so we can carve them and do fun activities with them! Pumpkins are just too cute!

So to begin our pumpkin activities (besides the felt board pumpkins), we created a pumpkin scented rice sensory bin! We used a big batch of orange rice scented with pumpkin pie spice and a small batch of black rice to make Jack-O-Lantern faces. 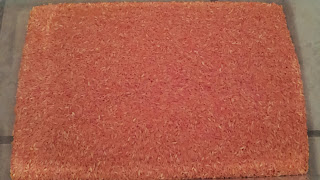 Making coloured rice is simple and only requires some rice, a small amount of white vinegar and either food colouring, gel colours or liquid watercolours. We usually use either food colouring or gel colours. Simply pour your rice in the amount that you want to colour into a container (food colouring may stain the container), and in a separate bowl mix together a teaspoon-tablespoon of white vinegar (may need more for a bigger batch, but a little goes a long way!) and a few drops of food colouring. It's as simple as that! After that, you can add in scents using either essential oils or spices or herbs. For this batch of pumpkin scented rice we are using McCormick Pumpkin Pie Spice.

We used some of our cookie trays to make some pumpkin faces! The kids took handfuls of the orange rice and pushed them into a circle. Then they scooped up some black rice and made a couple faces!

Bean's pumpkin - She said he was snarling. 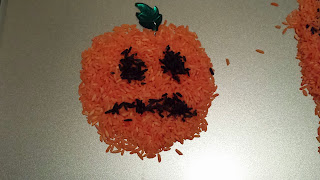 Munchkin's pumpkin - He had some help from Bean after she exclaimed that one eye was too big! :) 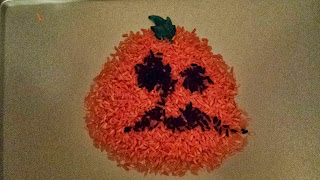 After they finished making a couple faces they wanted to play in the rest of the bin! I set up the bin with orange rice and filled up a few plastic Jack-O-Lanterns with the black rice. They had so much fun pouring the black rice and making fun designs! There were also several acrylic pumpkins and green leaves added (bought from Michael's) and once the Jack-O-Lanterns were emptied, they used them to scoop up the acrylic pumpkins and dump them out. Bean even sang a little song she made up, "Pumpkins in, Pumpkins out. Scoop them up, dump them out!" 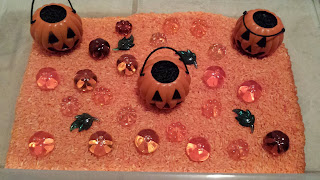 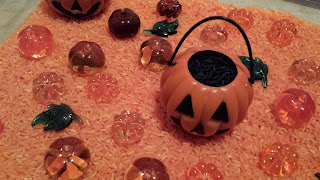 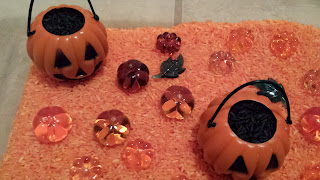 This was such a fun sensory bin to play in! 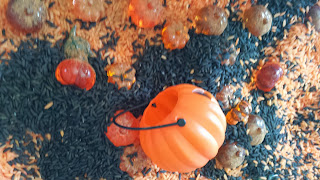 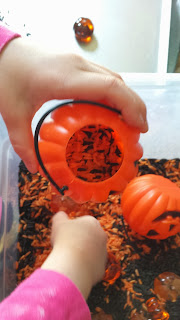 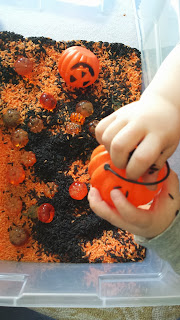 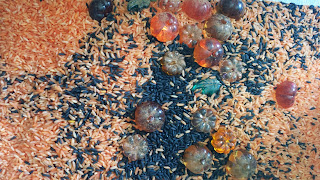 We added in some funnels and spoons for more mixing and pouring fun! 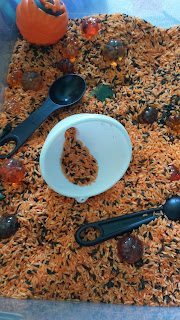 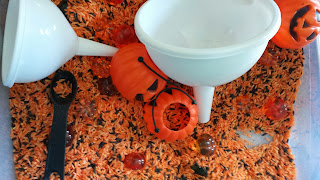 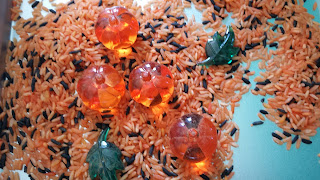 And Bean had to include her turtle! Apparently turtles like pumpkins too. :) 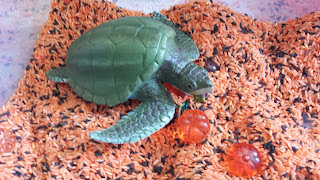 This sensory bin was so much fun to play in and I plan on leaving it out all month for them to enjoy! We will add in different Halloween themes each week. Pumpkins, black cats, ghosts, witches, and monsters! It will make a fun Halloween themed I-Spy bin. :)