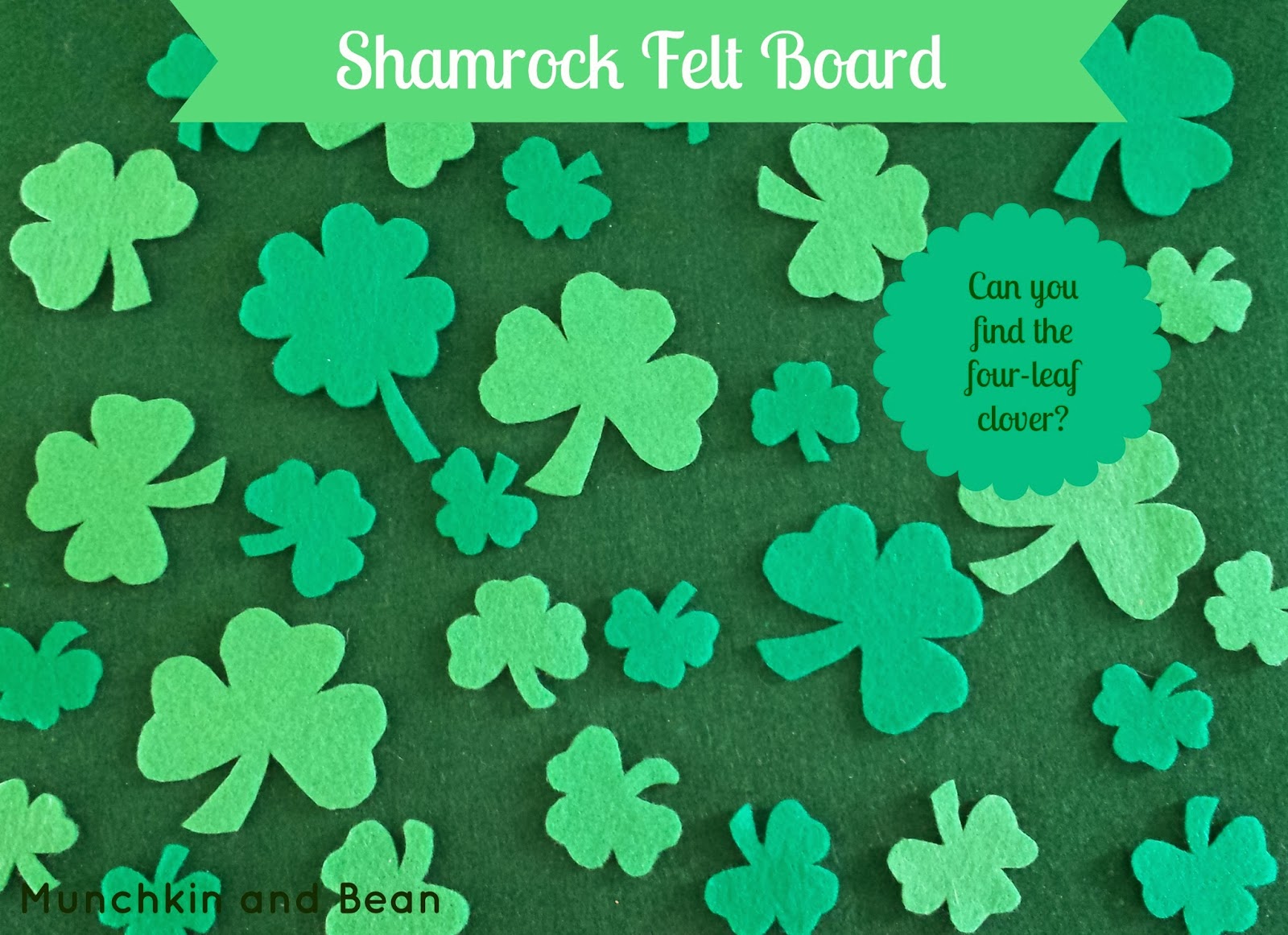 This post contains affiliate links. Thank you for your support!

Here is another one of our super simple felt boards! This one literally only requires shamrocks of various sizes and colours. We used our green felt board, but you can always put a sheet of green felt over your felt board if it is another colour. I found a shamrock pattern on Google and printed it off. I cut out the various sized shamrocks (one of each size) and picked out two shades of green felt

that was different from the colour of the felt board.

Cutting them out is pretty simple, but can be time consuming. If you print the shamrocks on card stock you can use them as a stencil and trace around them with a disappearing ink pen

and then cut them out. Or you can hold the shamrock against the felt and cut around them with sharp fabric scissors

. For the four-leaf clover, I simply began cutting out a three-leaf clover and then added a fourth leaf at the bottom and a stem between two of the leaves.

If you like the felt board but don't have the time to cut out a ton of shamrocks, I have seen felt shamrocks at Michael's Arts and Crafts, Jo-Ann's, Target and on Amazon

. (And they will probably be on sale soon!) 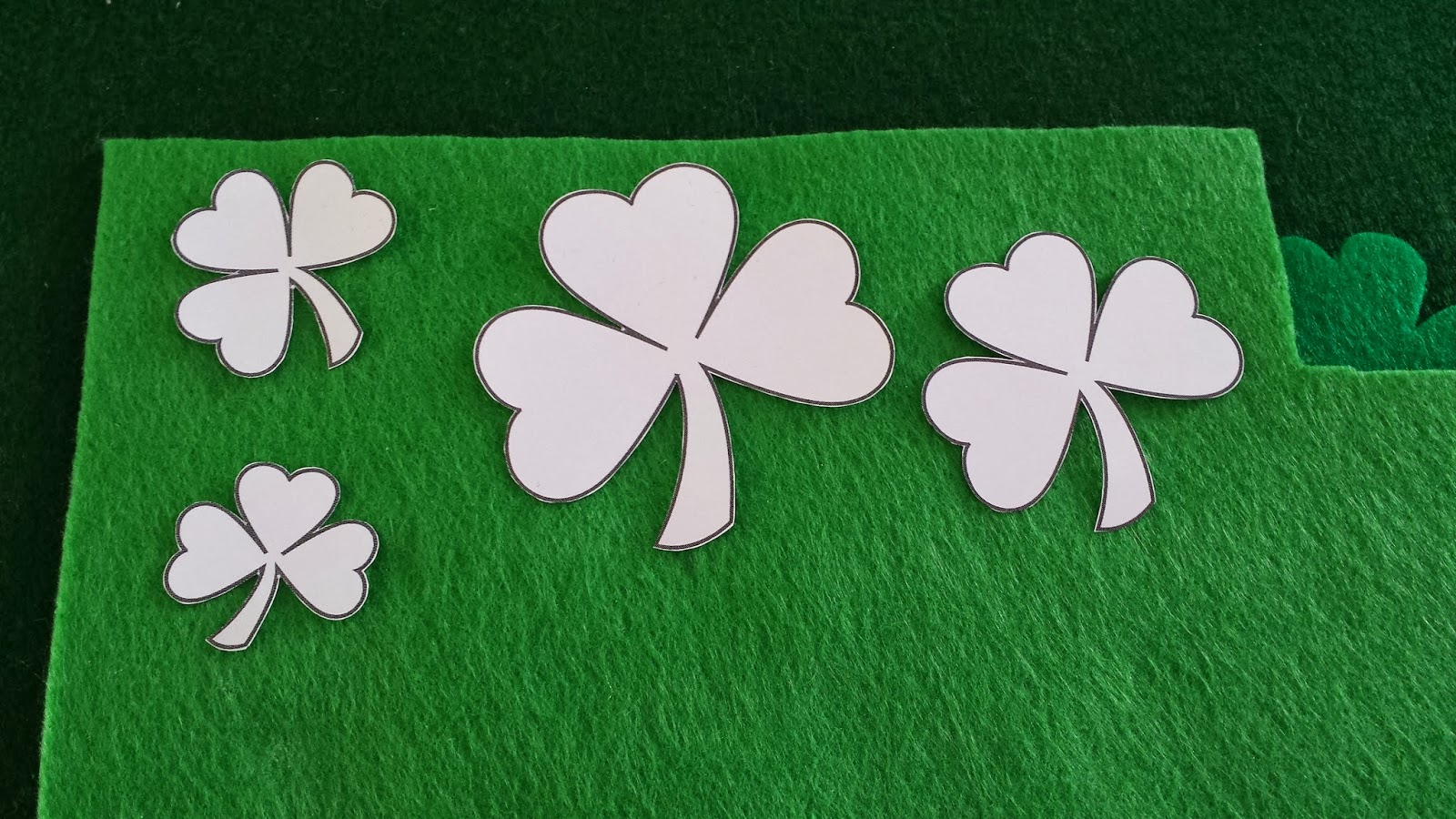 We played a few different games with this felt board, but Munchkin's favourite was "Find the Four-Leaf Clover". We just mixed up the shamrocks and spread them out and the kids searched for the four-leaf clover. Bean really liked stacking up the shamrocks by size - smallest to biggest and biggest to smallest. And because we have been working on patterns lately, she made a few different patterns by lining them up on the felt board. She used both their size and colour in her patterns. 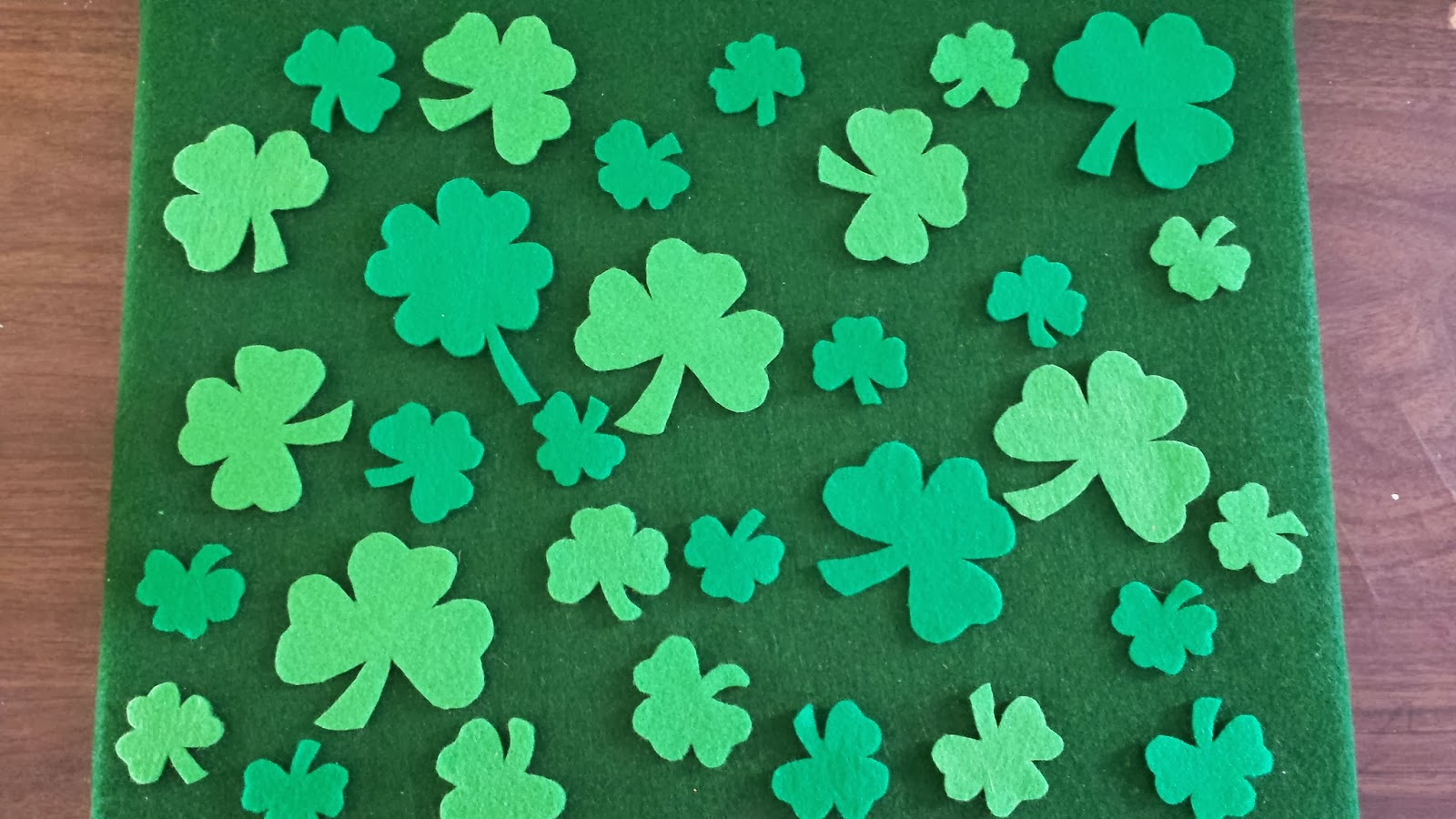 Munchkin spent much more time than Bean playing with the felt board and eventually asked for the big pot of gold from our Saint Patrick's Day Felt Board. I was reading a story about leprechauns while he was playing with the felt board and decided to come up with a story about it. Apparently (according to Bean) when the rainbow came down to the pot it was very strong and pushed it over. (I think she has rainbows and the Asgardian rainbow bridge mixed up, but that's ok.) So we pretended that the pot of gold accidentally tipped over and all the gold spilled out (see them peeking out under the clovers?). So the leprechauns needed a few little helpers to help find the gold that was lost in a clover field. Munchkin was all to happy to help! 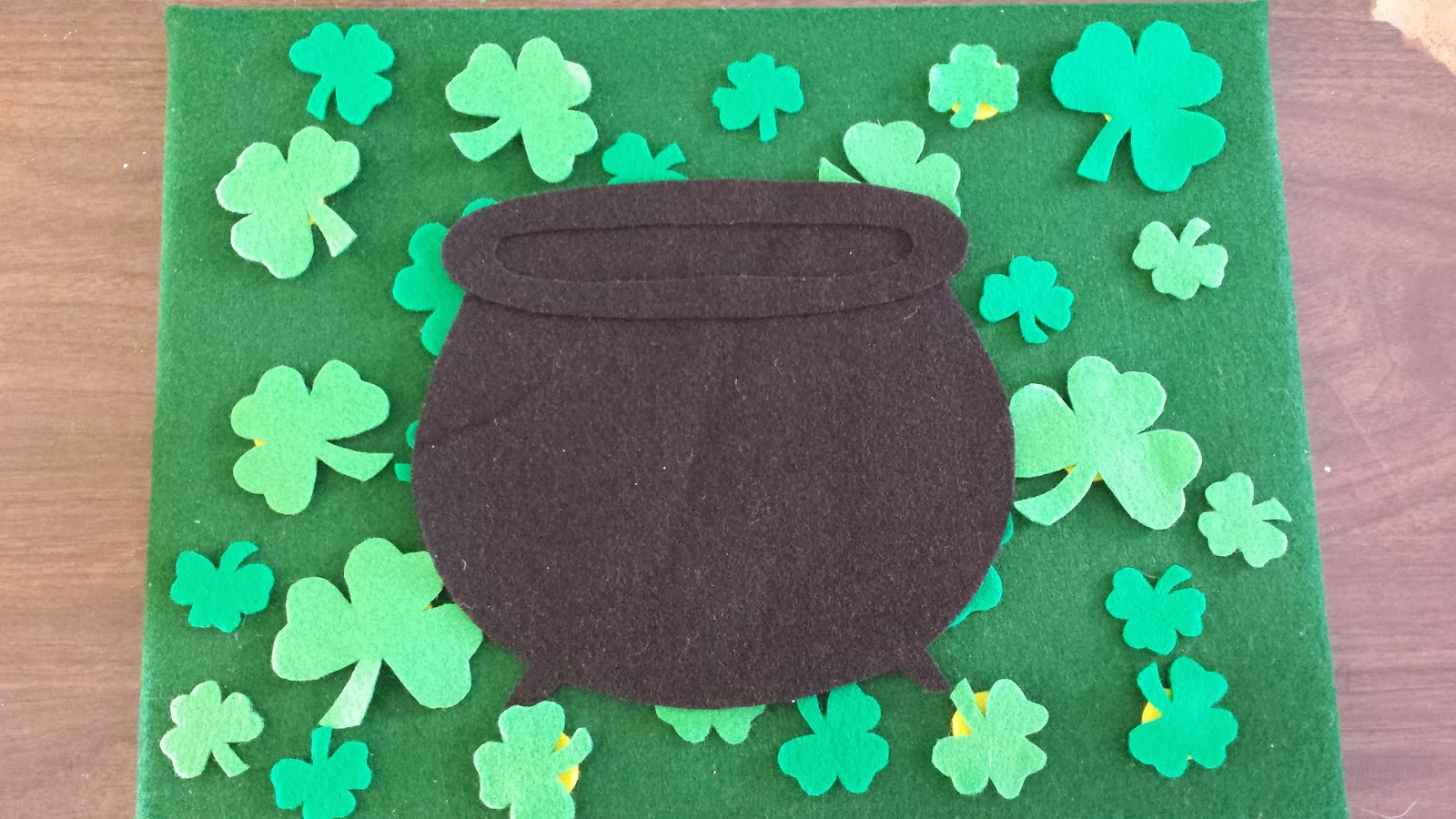 He made sure to check under each and every shamrock and eventually collected them all. It was adorable how interested he was in finding all the lost gold coins. 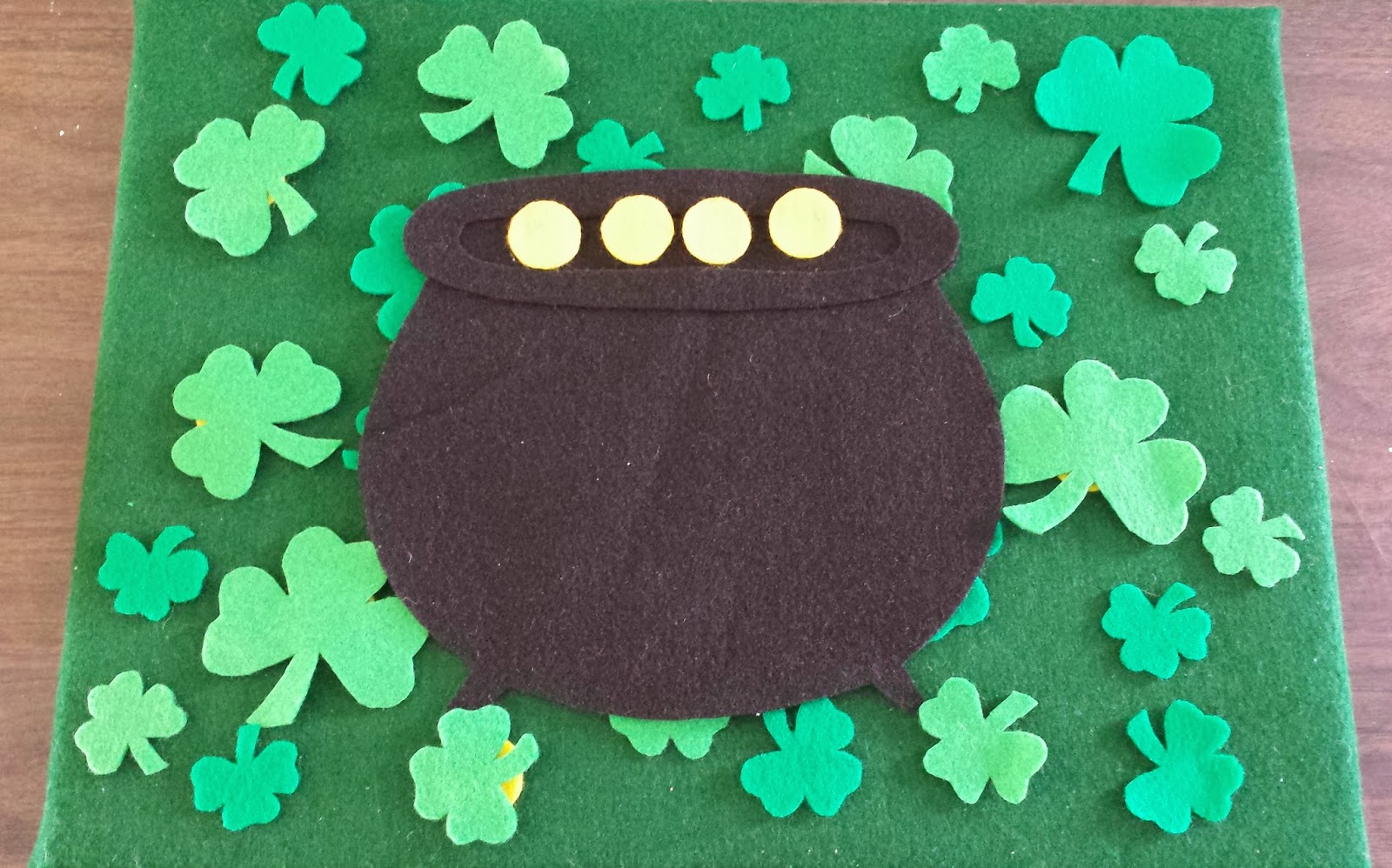 We have a small pot of clovers growing on our windowsill and he brought it over to the table while he was playing with the felt board. He was looking for a four-leaf clover but we haven't been able to find one that wasn't felt yet. :)