Since today was an overcast day with a few light showers, I decided to make today's sensory bin water-based. We couldn't go outside to the park because of the rain, but we could still get wet and have fun! The arctic is a habitat that we have not explored yet, so before we put together the bin, we looked at some pictures online. I asked Bean what we needed and she collected a few animals, cotton balls (because they are white and look like snow) and some cut plastic grass, because of course that was seaweed and the animals had to eat. They snacked on real seaweed while I filled the bin with ice-cold water and added one drop of neon blue food colouring and sea salt (not too much).
Earlier in the day we were working on our Letter I-spy bins. We needed another item for I and had decided on igloo. So Bean and I made one using wet cotton balls. She dipped them in the water and then stacked them in a small round bowl. We only layered around the edges and then put it in the freezer for a half hour. I never got around to taking a picture of that bin because we ended up using it for this bin instead.
While they played in the bin I played arctic animal sounds from YouTube and Bean tried mimicking them. It was wicked cute and she was especially interested in the penguins because they walked around with eggs tucked under their bellies. I gave her a plastic egg and she tried to balance it on her feet but wasn't able to walk like that, so she put it under her shirt instead. :) 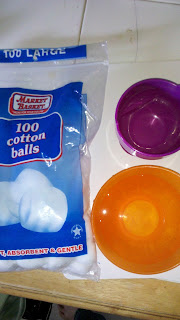 Press the cotton balls up against the bowl and then pop it in the freezer for a half hour. 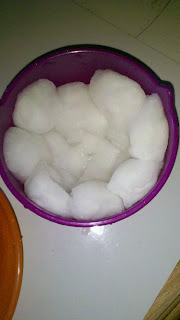 The items Bean recognized from pictures we found on Google (a dolphin, a whale, a puffin, a penguin, a polar bear and a boat). 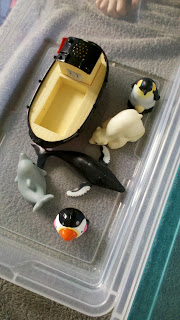 The water was shallow enough that Munchkin didn't make too much of a mess splashing :) 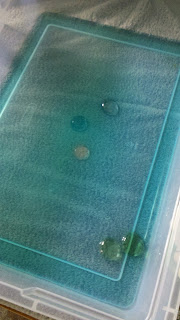 At the last minute Bean grabbed a few coffee filters and then did not use them. We left the igloo in the bowl until they were ready to add it. 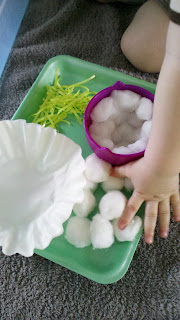 The igloo was fantastic! I think the water being so cold helped, but it lasted over a half hour. It didn't last any longer because Munchkin destroyed it. 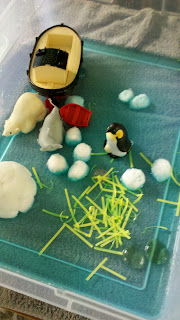 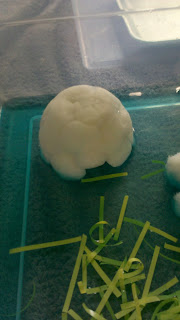 Because the water was blue the cotton balls slowly absorbed the colour until they were blue too. Until they were completely wet they were floating around like icebergs. 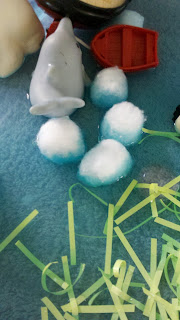 Munchkin remembered what happened to the cotton balls the other day.. so he proceeded to rip them apart. 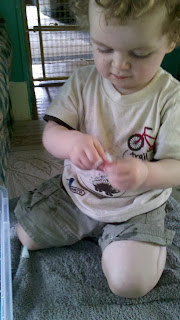 Bean decided the penguin lived on top of the igloo and flattened it down so the penguin could get back in the water more easily. 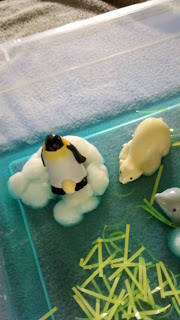 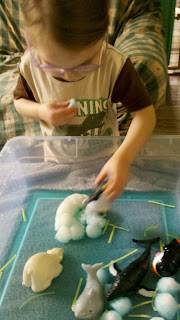 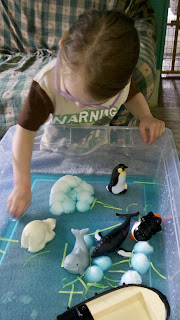 Munchkin had added the glass beads and now he had to collect them again and hold them close.. 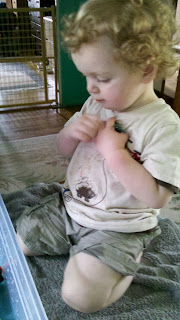 And then throw them back in to watch them splash. :) 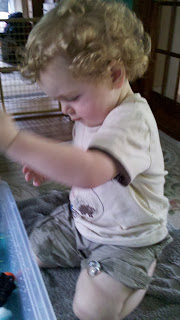 It will be really fun to try this again with real ice and build icebergs for the penguins and polar bears to slide off of. :) 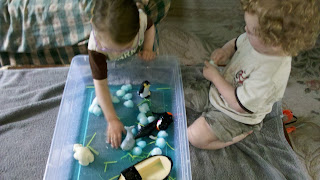