Once again, we are exploring habitats! Our most recent small world was inspired by deserts! Deserts are dry and hot, so we specifically waited for a sunny day to create this small world. This past week was perfect, it was in the 80's here. :)

And although I did not add any pictures for it (because it wasn't until after I was finished taking pictures that I had the sudden thought to add it), we also used a flashlight to make the small world brighter. I bent pipe cleaners and molded it around the flashlight so that it looked like a sun when you looked up at it. Bean loved it and was excited to move it around the bin to see the shadows it created. It was also perfect for recreating "lizards basking on rocks" (pictured below), because Bean could control the flashlight and used it to get really close to the lizards to examine them.

While exploring the desert habitat, I read some facts about deserts around the world and went over the key features (the sand, rocks, trees, animals, etc.). I showed them pictures of animals and creepy crawlers that live in the desert. We chose not to add in the camels, although we did talk about how they survive in the desert. Instead we focused on creepy crawlers, specifically creepy crawlers that lay eggs! We spent the previous week talking about birds, crafting a couple and cracking eggs. So this time we explored other creatures that also lay eggs, which includes lizards, bugs and snakes. :)

To build a desert small world, all you need is a bin, some sand, rocks, trees, animals and/or creepy crawlers. :) If you have small cacti or succulents at home, they would be perfect for this type of small world.

I let Bean fill in the bin with sand. (We will use ground corn meal next time, since it has such a pretty orange colour and great texture. It looked really adorable in this desert themed sensory bin.) We used about two cups of sand and Munchkin added the rocks. They shook the bin up a bit so that the rocks were scattered and the sand smoothed itself out. 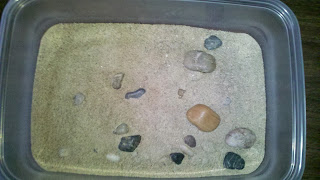 I set up the palm trees, snakes, lizards and bugs on the side so that they could add them by themselves. 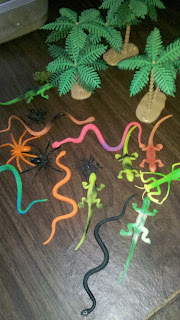 Munchkin managed to find some glass stones that he added and I normally would have pointed them out and said they were small patches of water in the desert, but they did not end up interacting with them at all. However, in future, they would be perfect as little pools of water, since they are solid and blue and wouldn't make a watery mess of the desert. :) 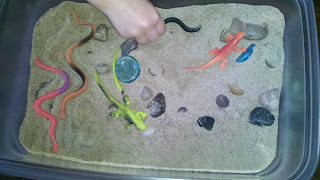 Bean thought the spider looked pretty in her hair. :) 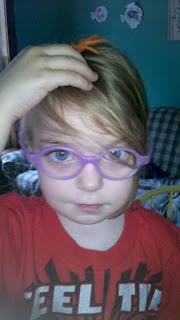 They spent quite a while building the desert. They would add all the animals, move them around in the sand, take them all out, plant the trees, remove the rocks, and then add everything back in. I showed them how the snakes slither in the sand and then showed them a few clips from YouTube. Unfortunately our snakes were unable to coil up, but Bean managed to mimic attacks on the flies and spiders. This is a great way to go over the food chain, which is something we do with each habitat small world we make. 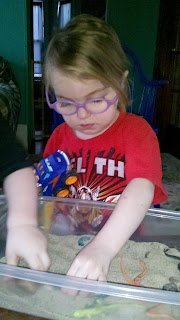 Food chain for plants, bugs, lizards and snakes. Flies eat the plants, spiders eat the flies, lizards eat the spiders, snakes eat the lizards. It would wrap around and flies eat anything that's dead, but there were no leftovers. :(
(A poster board with pictures of the food web will be perfect to make someday!) 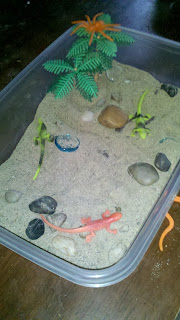 This fancy pink lizard spent about an hour basking on the rocks. :) When we brought out the flashlight, he crawled back over to the rocks and continued to bake. I explained that lizards are cold blooded and need to lay in the sun to warm themselves. We also talked about the food they eat and how some lizards lay in the sun after eating so that the food in their bellies cooks. :) 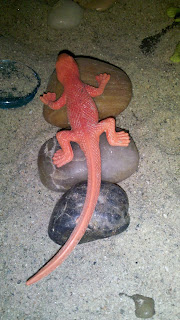 Then we got around to talking about laying eggs. We used dries peas for lizard eggs, since some lizards lay round eggs, and dried white kidney beans for the snake eggs. Bean made small holes in the sand for nests and then placed the eggs in one at a time. 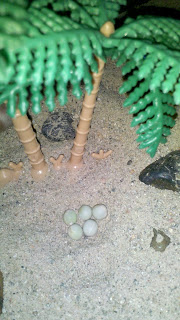 Mommy lizard guarding her eggs from the snakes. 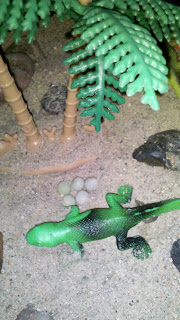 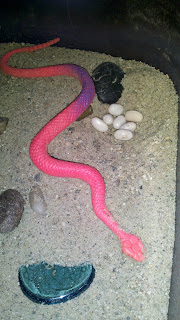 Bean spent half an hour playing with the eggs. She moved around the nests and rebuilt the ones Munchkin trampled. 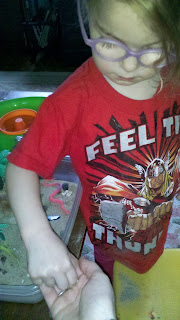 A few of the nests she buried. 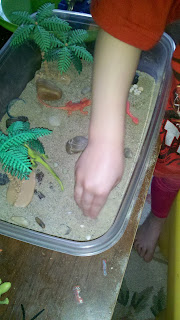 Our next desert bin will feature an oasis. :)