Exploring the Bottom of the Ocean

Sometimes you don't want to get the floor wet with a bucket of water. Sometimes it's too buggy out to enjoy playing in the water table. Sometimes coloured sand makes all the difference.

We had just read the book The Pout Pout Fish In The Big-Big Dark and Bean told me that she liked the dark part of the ocean. So I pulled out a Tupperware, poured in some dark teal sand, added some shells and rocks and a few ocean creatures who live at the bottom of the ocean and showed her. She immediately laid down next to the bin so she could get really close to explore. Normally we don't add sand to our ocean bins unless we are exploring the beach, so this was a pleasant surprise to her. The next time I bring this bin out it will be themed around the book, so we will wait until it is dark out so we can use a flashlight to search for the pearl in the dark. :)

I used dark blue sand to represent the fact that very little light can be seen down at the bottom of the ocean. I added a few pretty blue beads to act as air bubbles escaping through the sand. 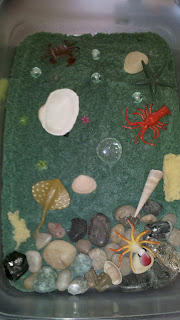 Bean really liked that I threw in a few small pieces of sea sponge. She made sure that the crab claimed some as a comfy bed. I told her that some sea sponges are carnivorous and she gasped and asked why. Since this is the deep dark bottom of the ocean, this sea sponge wasn't able to collect a lot of nutrients from the water, so instead he started to prey on small crustaceans. Luckily for the crab, the sea sponge was too small to catch him. 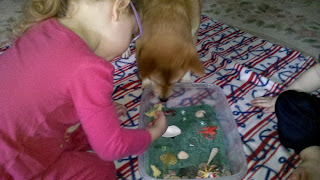 Bean especially likes the green turbo shells and always has to check them to see if there is anything living inside them. 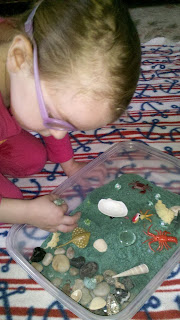 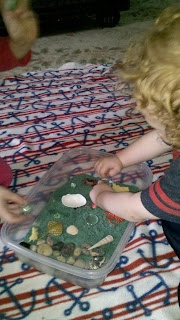 He thought they were pearls so he put them in the shells. 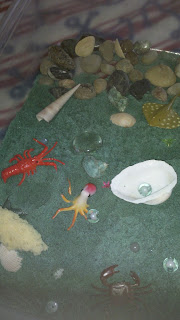 The sting ray is very popular with both kids. They love that they can scoop sand with him. 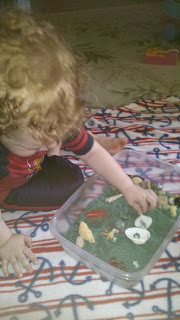 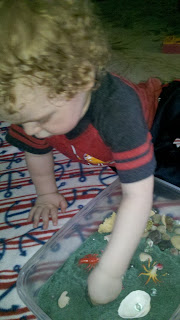 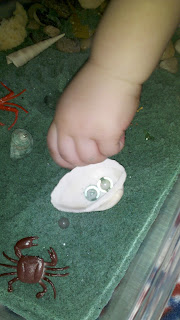 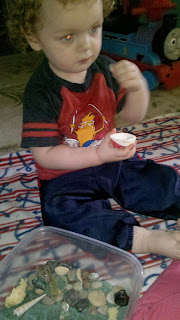 Bean found the buried sting ray and I told her about how they burrow in the sand to camouflage themselves against predators. Since the sand is blue, that wasn't as easily done. Had this been regular sand, he would have been fine (not that there were any predators around to worry about). 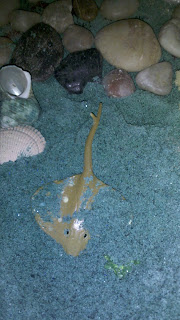 We had also read the book Shells! Shells! Shells! by Nancy Elizabeth Wallace earlier in the day, so Bean pulled out all the shells and I told her what each one was named. I told them about how shells grow using a shell building liquid from their body and they looked at them very closely to see the layers made by the mollusk. 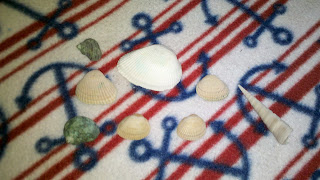 Munchkin put all the shells back in and stacked them up. 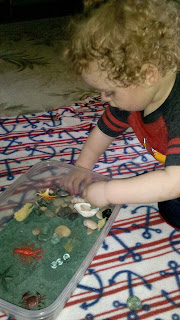 Bean moved on to starfish and made him "stick" to the wall. I told her that if the wall wasn't there, he normally couldn't stand up like that. So we decided this was a secret cave and that was actually a wall that he was living on. 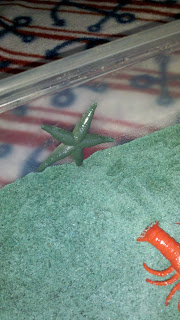 We didn't talk much about the lobster, but I told Bean about the black ink that octopus' release when they are escaping from dangerous situations. We will definitely be exploring them later this week to demonstrate. :)