One of our favourite purchases at the beginning of September, when all the fun back-to-school items were in the dollar section at Target, we picked up some small foam letters. Typically we use them in sensory bins (especially water bins!), in our collection of alphabet letters which are used for sorting and matching and to play with in the tub (because they float and stick to the wall). But more and more lately we have been using them like a puzzle and matching them to flash cards and enjoying simple iSpy letter games in sensory bins.

Well we decided to combine all of those ideas into one big sensory bin! 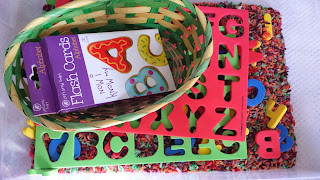 This was perfect for Bean, because she would go through the flash cards, pick a letter, and then find that foam letter mixed in the rice and then pop it into the base in the matching spot (we saved them instead of throwing them out because they work like a puzzle and make it so much easier to store the letters). 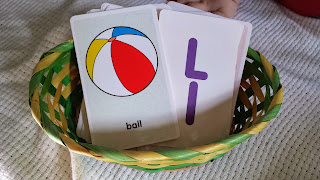 It was a super cold day, so I set them up on a blanket near the heater, gave them the big comfy pillows off the couch and put the sensory bin in front of them. Immediately they took out the flash cards and set them up in the basket. Bean handed Munchkin the foam base and told him to match the letters with her. Bean is always very particular. So she picked out a flash card first, then found the foam letter, then matched it in the foam base. 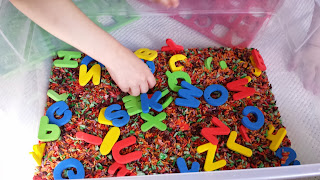 (While I was collecting the supplies, they were popping out the letters and had mixed them into the rice themselves. They always enjoy being a part of the process.) 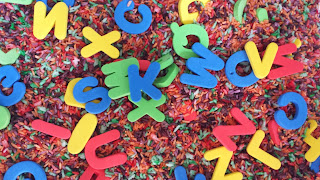 Since Bean had told Munchkin to "match" his letters, he only searched for red letters (probably because the base was red). He did a fantastic job matching them too! 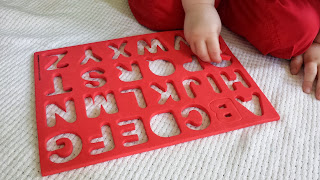 He worked on matching each letter until he found the right spot. Currently he just tries to find the one it fits in, rather than actually looking at the letter. 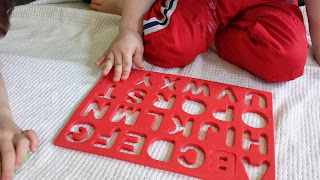 Bean, on the other hand, diligently matched the letters in alphabetical order (because even though the flash cards were shuffled, she still found them and put them in order). 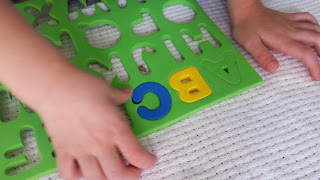 At one point her ocd (because I'm pretty sure she's ocd) overcame her and she tried to "help" Munchkin by matching A and C, but since they were green and blue he got upset and took them out. One colour at a time for this boy. 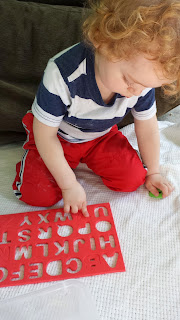 This kept them busy for quite a while and I played some Halloween music (because we normally play music for background sound). Which eventually we ended up dancing to. 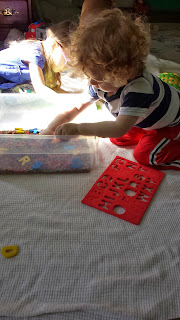 I was able to sit back and let them work by themselves while I worked on some crocheting projects. It's scarf season (it's been below 50 degrees all week!) and I've finished about 10 scarves these past two weeks and still have a couple more to do! 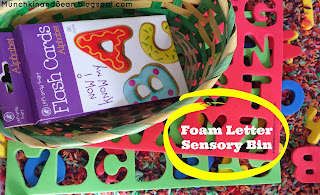