I have to say, Frozen looks like it will be a fantastic movie. We haven't seen it yet, mainly because I've never taken my kids to the theaters before and I don't think they would enjoy it yet. Especially because they aren't the kind of kids who can sit down and watch a whole movie or even a short TV show. They just don't have that kind of patience. However, we do still plan to pick up the DVD as soon as it comes out, and in the meantime we are enjoying reading Frozen books and playing with toys from the Disney Store. And I apologize in advance, I was going to add a non-affiliate link to the Frozen play set we played with, but it's no longer on the Disney Store website. Hopefully they will be back in stock soon, because they are also missing the Elsa doll, which I was going to get Bean for her birthday (still can't believe she will be 4 in a few weeks!). Anyways... 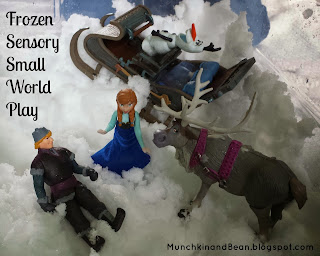 Here is our Frozen set-up. I used the same snow-filled bin that we used in our Frozen Small World, where we explored the different animals that live in the arctic. The kids really like this play set and have been playing with it almost daily since Christmas. Today was the first time we created a small world for it with a Frozen inspired theme. The snow was perfect! 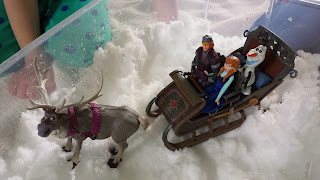 However I don't know if they know how to drive this sleigh, because more often than not they drove straight into a snow bank. :) (And just a note, the reindeer does come with a harness that is connected to the sleigh, but we removed it because the kids had difficulty keeping the sleigh straight.) 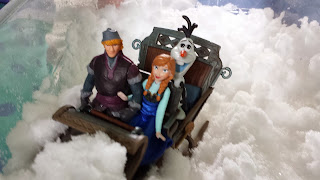 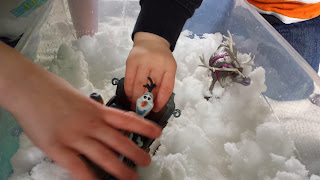 Snow is tasty like cold water, in case you didn't know. Bean helpfully pointed that out to Munchkin. 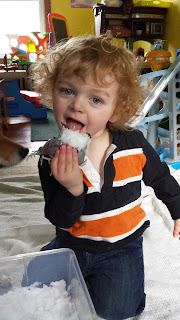 Bean really loves Olaf the snowman! She is a bit obsessed with snowmen. :) 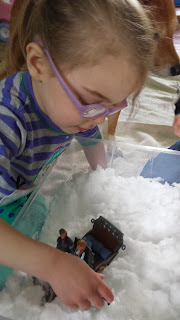 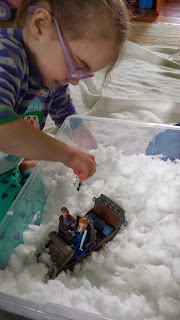 She even made him a snowman friend! :) 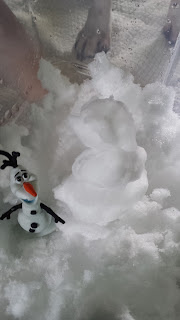 Our dog Kaede joined in a few times. She loves playing in snow too! 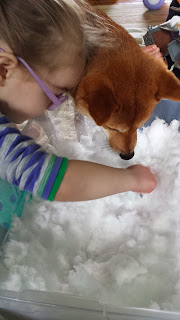 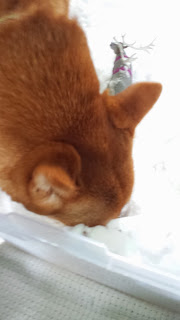 The Frozen crew went on many adventures! They went out scavenging for food, they built snowmen, they tried to build a snow cave, but it collapsed, and they went driving around looking for Anna's sister, Elsa. Here Kristoff and Olaf are standing around waiting for Anna to get back. 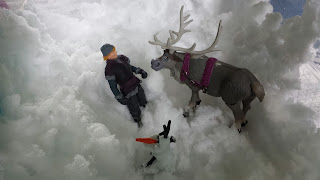 But Olaf got bored and decided to take the sleigh for a ride. But he's a snowman and can't drive, so he crashed it. Anna got back and said, "what a mess!" Kristoff just sat in the snow and said, "Olaf is silly." I love listening to Bean tell the story. 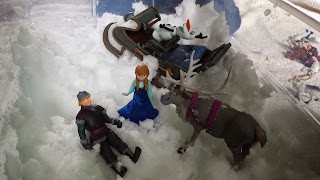 They finally got the sleigh out of the snow and were ready to get going again. But now Kristoff was missing, so Olaf offered to drive. 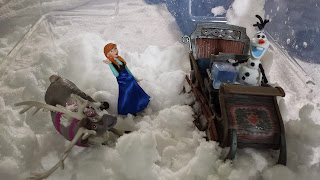 But Kristoff made it back in time to stop the snowman. 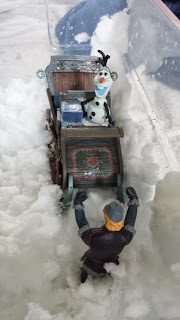 They also met some other animals along the way, like this lost caribou and Olaf's new friend, Husky. 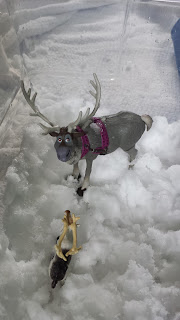 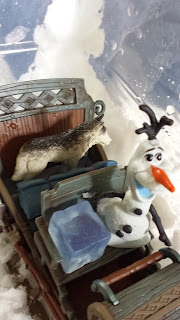 Kristoff tried to bring home a walrus, but it was too heavy. 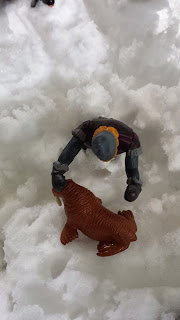 But at least he managed to find a snow hare. 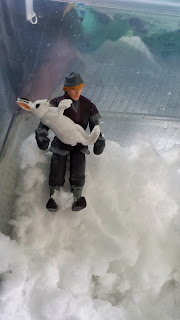 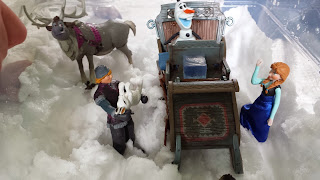 And the penguins are back! 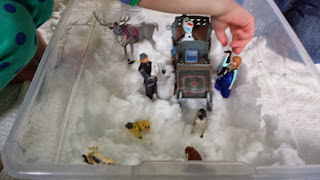 This was definitely the perfect sensory small world for the Frozen crew. We will be doing this again soon! The snow was also really easy to clean up and we tossed whatever hadn't melted back outside making sure to double check that all the animals were removed. 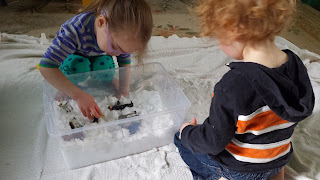