If you haven't tried freezing baking soda, I definitely suggest trying it! It has been so fun to play with at our house. We have tried frozen fizzy cubes, a frozen dinosaur excavation and an arctic small world. Each of these have been so fun and we keep revisiting them every few days because they are perfect for hot days!

I can't wait to try freezing mammoths when we discover prehistoric creatures later this summer. To prepare them for an activity like that, I decided to start by freezing other creatures first and our finale will be mammoths frozen in ice. Before setting this sensory bin up, Bean and I read some books about sudden climate changes and what happens when something freezes. In the past, there have been several areas around the world that had been tropical climates before experiencing an ice age or just a sudden freeze that caught the creatures that lived there by surprise. So that was our theme for this activity!

I let Bean pick out the creatures she wanted to add, which ended up being a couple snakes and lizards. I filled a tall, round container half-way with baking soda and then poured 2 cups of water over it. I knew some of the baking soda would settle at the bottom, so I added the extra water to show that there were two densities in this block of ice. I let Bean stir it up and add the creatures, then we froze it. Because they were cold-blooded creatures, they were not able to adapt to the cold and were unfortunately frozen in ice. 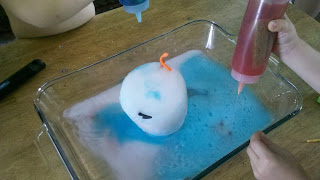 The day we decided to do this activity, their step-brothers were over, so I made sure the kids shared and took turns using the "hot and cold" water to melt the ice (which was actually coloured vinegar mixed with water in icing bottles - we used red for hot and blue for cold so they could see the difference). As you can see in the pictures below, the red water melted the thick ice at the top while the blue water barely effected the ice. It was a great way to show how different temperatures of water effect ice. 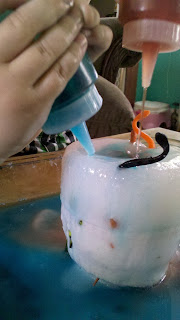 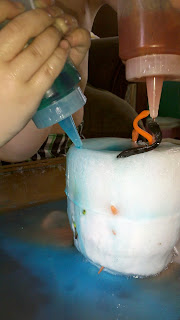 The two layers of ice melted at different rates. The lower, less dense ice melted much faster (also because it had a higher concentration of baking soda), while the top layer was much harder to melt. But after some time and much diligence, they managed to melt away enough of the ice to start seeing what was trapped inside. 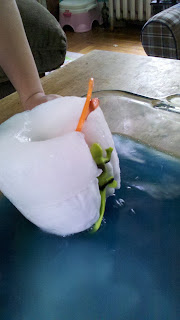 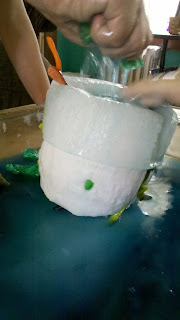 I gave them some small sponge scraps to use. They used them to soak up vinegar and squeeze it onto the ice, scoop up baking soda that had settled under the vinegar water and to scrape the baking soda off the chunk of ice and creatures. 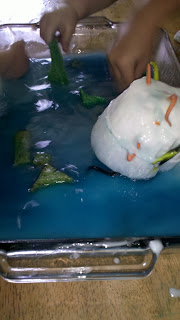 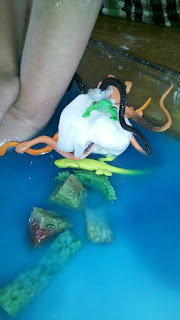 Even little S had fun playing in this sensory bin! His mum made sure he didn't put anything into his mouth, but he did try tasting the vinegar. He made a funny puckered face look and then continued playing. 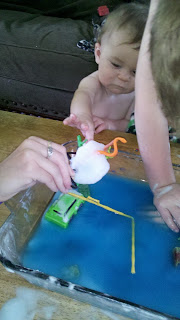 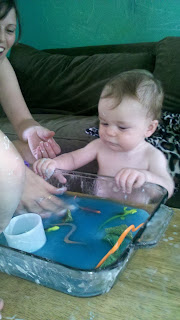 The smell of vinegar doesn't effect us and we haven't had any sensitive skin issues. But if it bothers you or your little ones, you can try adding in a few drops of skin-safe essential oils to mask the smell.