I always loved pretend play as a kid and I am so happy that my kids like to involve me in their own pretend play activities. There is just something rewarding about sitting at a tiny table with them, being served tea and knowing that even though I'm getting stuck with the bill, I get to pay it in pirate coins.

What I like about activities like this is that they are actually learning practical life lessons. For instance, we talked about how to properly set up a table. Although it didn't stay proper for very long, they did follow along and were able to set up the plate, fork, spoon, knife and cup according to my directions. I stood near them and directed them by saying things like, "The fork goes on the left side of the plate." Munchkin doesn't know his right from his left, but he watched Bean and was able to copy her. 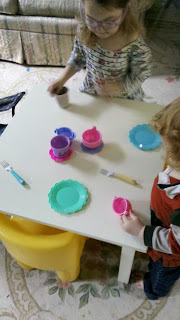 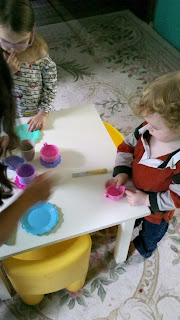 We set up the table and the kids sat and waited to be served. Like I said, the setting didn't last long and soon they were stirring their cups with forks and serving each other tea on plates. :)

Earlier in the morning while they were still eating breakfast and playing, J and I designed some menus and "tips". She tried to make her own and was not satisfied, so I helped by writing out the menu (the kids made suggestions and told me what to write). I liked my idea for the tips jar. It's literally a jar full of small papers that have simple tips on them, like "eat all your vegetables" or "wash your hands before eating". They were all food-related and every time we sat down to be served we each pulled one out and read it to see what our tip for the meal was. I used metallic markers, so I apologize that the silver on blue is hard to read, but we loved the way they looked on the black menu. 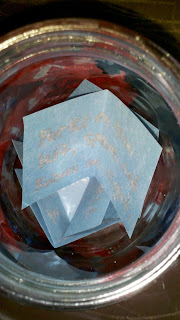 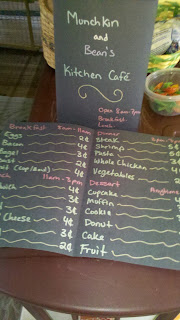 We used coins to pay for everything, so this was another practical activity they could learn from. (And I did clean the coins before they played with them.) I gave them plenty of pennies, and a handful of dimes and nickles. I also threw in some pirate money, because pirates are cool. A couple receipts were pre-made as well. Each one has less or more items and different amounts of money per scribble. This way they could practice counting the items they order and the amount of money they pay. The menu says what everything costs and Bean really liked the addition of the coins. She basically screamed "money!" and demanded that I hand it all over. :) J decided she was their mother for the first round and gave them each 11 cents for allowance. 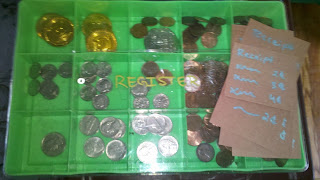 They waited impatiently to be served... Ok, there was a tiny bit of fork banging from Munchkin and Bean kept asking if she could pay yet.. :) 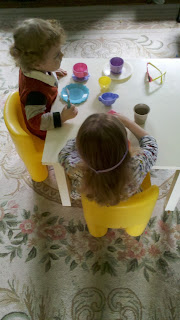 The kids loved the new menu and spent a bit of time looking through them. Bean pointed out a few letters and asked us to read the menu for her. Then they pointed randomly at what they wanted for lunch. 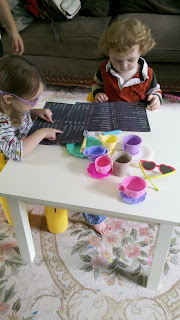 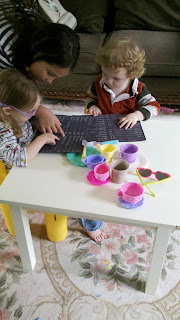 I was the chef, so I brought out their plates and served them. They eagerly dug in. 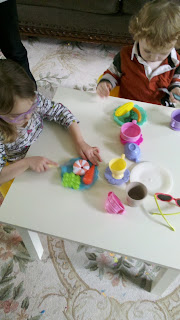 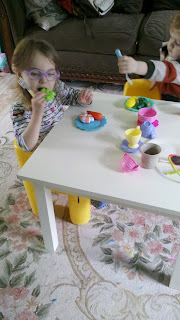 Bean really liked her lemon water. She insisted on adding the whole lemon. 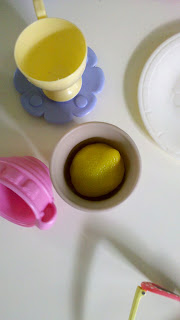 Munchkin followed along with everything but wasn't getting into it the way J and Bean had. 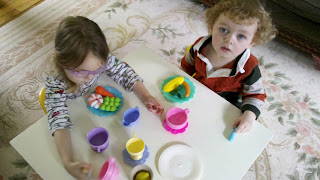 Bean loves the scene in The Little Mermaid when Ariel brushes her hair with the fork... so of course she had to try it out. It doesn't work well.. 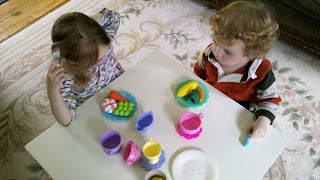 Then we were finally able to pay for everything! Bean eagerly pulled the coins out of her pocket and I sat down beside her to help count out coins. Shrimp cost 5 and vegetables cost 2 each. Bean is starting to understand that certain coins have different values. 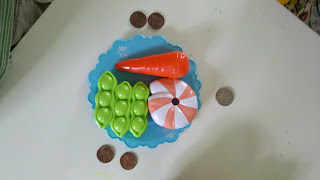 Munchkin doesn't know how to count yet, so Bean happily helped him. 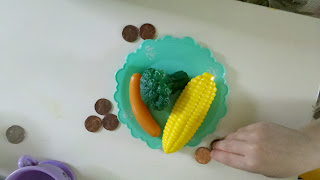 Then they paid for tea.. 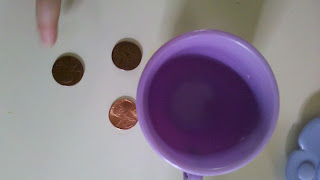 After that, the whole process started again. Each time they changed what they ordered and after about an hour Bean realized that the more she ordered the more she got to pay for... Which also means she needed a bigger allowance. So mama J put her to work and had her serve customers for a little while. I ordered lemon tea. :) 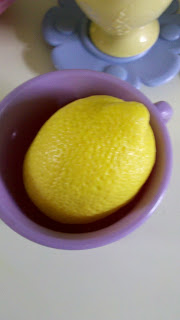 Munchkin and J were served bread while they waited for Bean to cook up their meals. She did not bring them what they ordered, but instead told them she made something yummier. Always trust the cook. :) 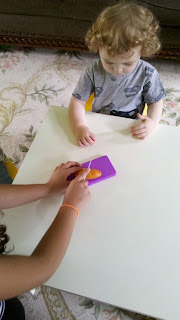 She brought them their receipt and I rewarded her by paying her double her allowance. She was so excited! 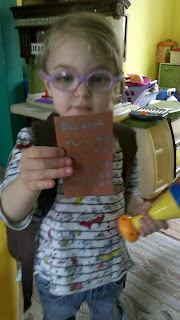 This bill was paid by Bean, who was spending her allowance on a yummy dinner with her family. She even had money left over, so she tipped me 21 cents, woohoo! 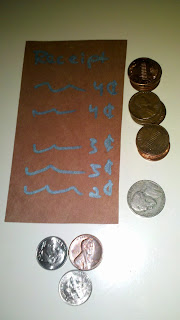 Munchkin decided it was more fun to play with his cars at the table, so he did his own thing. 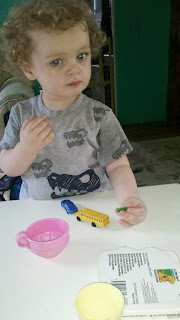 While Bean waited for J to cook up another yummy meal, she filled the empty spice container with some of her coins and turned it into a sound shaker. She then proceeded to add some noisy spices to her pasta dish. :) 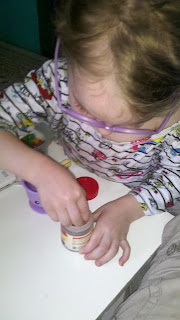 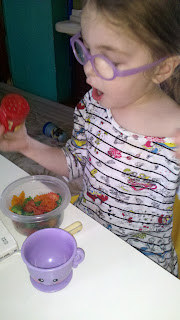 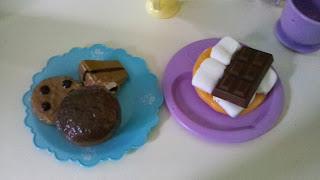 Bean later took over the cash register and used the days earnings to cook a coin meal. She made sure to rinse and drain the coins before baking them. Turns out coin bread is just as dry as corn bread. :) 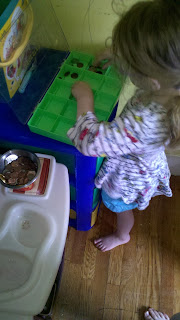