We love everything dinosaurs at our house. We especially love our dinosaur digs, when we go searching for fossils. We normally use salt dough for fossils, but this time we tried out plaster of Paris. In the future, I will use containers that are much easier to get plaster out of because it was pretty hard to get the fossils out of the white containers. We still managed and they came out fine but they had a few rough edges.

Our box of Plaster of Paris instructed us to use a 1:1 ratio. We used 1 cup of Plaster of Paris powder and 1 cup of water and that made 3 bowl sized and 4 small bowl sized molds. I may experiment with the recipe later to see if I can make one that is more durable, and I'll make them thicker. These were fine for a first time and the kids enjoyed painting them afterwards. However, we learned the hard way that they break easily. Bean was moving one of the bigger ones and dropped it on the table and it split apart.

To start, pick out the containers you are using for a mold (slanted sides made it easier for us to remove ours), but I believe silicone would work best. Then pick out the items you will be using (we chose a few shells, a scorpion, a lizard, a small dinosaur and 3 big dinosaurs. 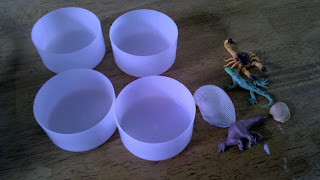 We used Crayola Model Magic to create the mold shapes. We pressed a small amount into the bowls and then pressed the items into it. When we were satisfied with the detail of the pressings, we moved on to the next one until they were all finished. Just keep in mind that the Model Magic will leak colour onto your mold, so if you don't want any colour sticking to your fossil, use white Model Magic air-dry clay. We actually wanted it to add colour to our fossils, that's why we went ahead and used a couple different colours. 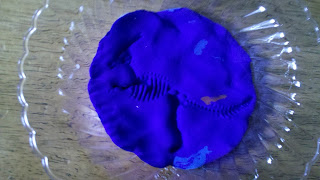 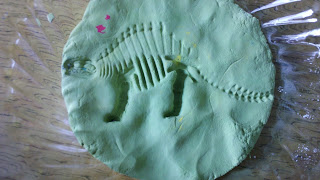 Then I mixed the water and Plaster of Paris together and poured them into the molds. The box instructed us to wait a half hour to allow them to set before removing them. 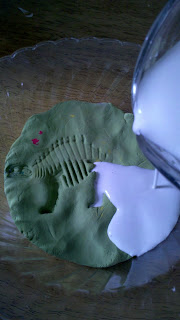 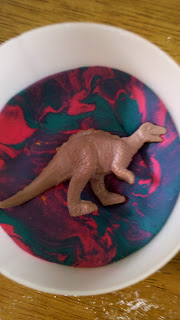 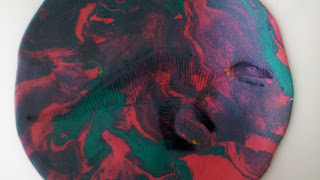 After we removed them, I let them sit out for an additional 24 hours. 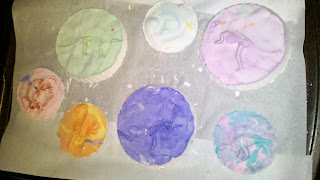 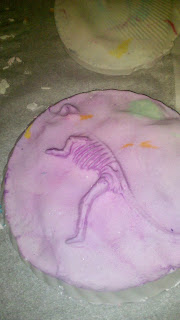 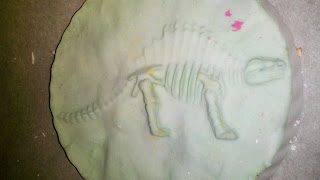 The detail on some of these are pretty amazing! 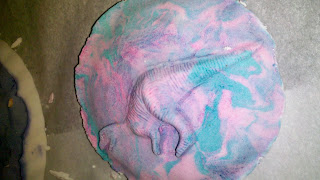 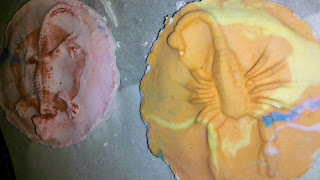 This is the one that broke when Bean was helping me transfer them from the bowls to the tray. 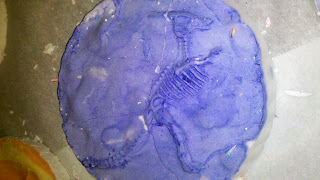 The next day I set the tray out and let Bean explore them. She felt each fossil and named the ones she recognized. Then we found the dinosaur bones that matched and played games comparing them. We also talked about how the shells and lizard and scorpion managed to become fossils. 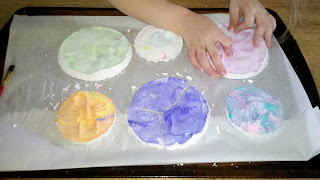 I let them add paint and glitter to their fossils, but Bean didn't want too much paint on them. 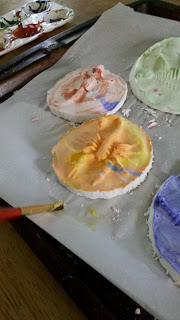